Did the Romans know about China?

Could there be a possibility that some Romans knew that there was a country north east of India? Because as far as I know the Romans traded with Indians.

The Han general Ban Chao (AD 32-102) reconquered the states in the Western Regions (the modern day Tarim Basin in Xinjiang) after pushing the Xiongnu out of the region. This included the kingdoms of Kashgar, Loulan, and Khotan, which were returned to Chinese control. He also sent his emissary Gan Ying even further in order to reach Rome (Daqin). Gan Ying perhaps made it as far as the Black Sea and Roman-era Syria, but turned back. He did however bring back reports of the Roman Empire, and there is evidence that subsequent Roman embassies to China took place.

The first diplomatic contact between China and the West occurred with the expansion of the Roman Empire in the Middle-East during the 2nd century, the Romans gained the capability to develop shipping and trade in the Indian Ocean. The first group of people claiming to be an embassy of the Romans to China is recorded in 166, sixty years after the expeditions to the west of the Chinese general Ban Chao. It came to Emperor Huan of Han China, "from Antun (Emperor Antoninus Pius), king of Daqin (Rome)". Although, as Antoninus Pius died in 161, leaving the empire to his adoptive son Marcus Aurelius (Antoninus), the convoy arrived in 166, and the both Emperor being "Antonius" the confusion arises about who sent the embassy. wikipedia

I started to deliver some of my trademark withering sarcasm, but it turns out I had to eat crow. I knew that the answer was "yes", and I assumed that a trivial google search would confirm my knowledge. It took 3 adjustments to the query and 3 pages of results before I found the above.

Roman knowledge of China is attested in the Geographia, the work of the famous Claudius Ptolemy. Which is not to say, however, that the Romans knew much at all about the Han Empire (or vice versa, for that matter). Ptolemy's map of the Far East coastline is rather distorted: 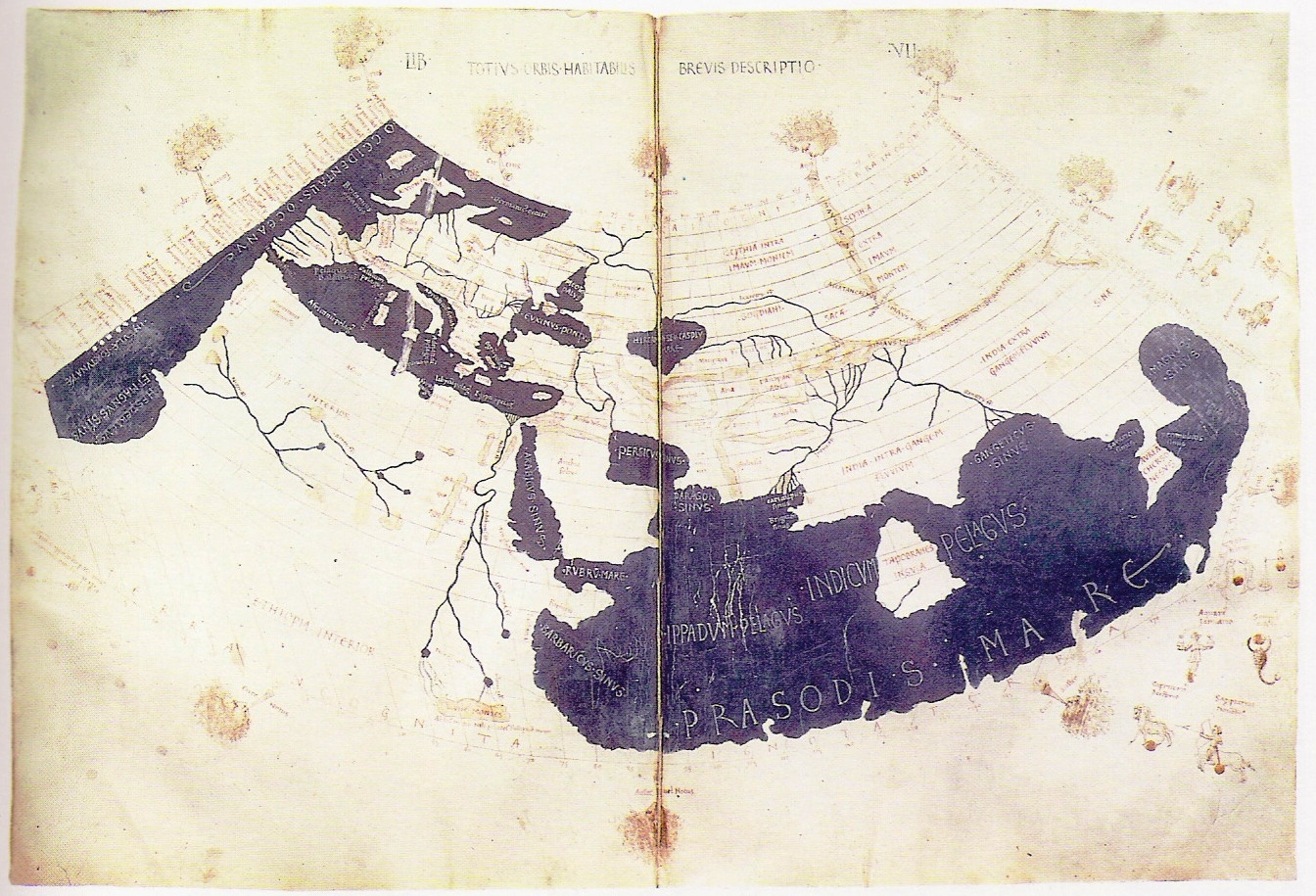 In Chinese records, the Han Emperor first received Roman emissaries in 166 A.D. According to the Book of the Later Han:

[Chronicles of the Western Realms]: In the Ninth Year of Yanxi during the reign of the Huan Emperor, King "Antun" (Antoninus Pius? / Marcus Aurelius Antoninus?) of the Great Qin (Daqin) sent emissaries into Nhật Nam bearing gifts of ivory, rhino horns and tortoise shell.

I hope no one will mind that some but not all of my comments below are repeated verbatim from a previous answer I gave to a related question on this site, as there is no particular reason to express them differently.

'The Periplus of the Erythraean Sea' [which roughly means, the Indian Ocean] written in ancient Greek but during Roman times, most likely 1st Century AD, translation available by internet search, is a practical account of trading ports and routes known to Greco-Roman merchants, what was bought and sold there, dangers 'en route' etc.

It contains quite a lot of information about trading to India and a little about Burma, but says no ships are known to have sailed further. It mentions 'a city called Thina' somewhere further inland from which silk is brought by traders. This is probably a garbled reference to China.

There are some relevant facts in a book I liked called ‘The Roman Empire and the Indian Ocean’ by Raoul McLaughlin. China is not on the Indian Ocean but the Romans would have sailed through it to get there.

As another answer mentions, Chinese record refers to a visit from a Roman embassy perhaps a century later in the 160s AD, possibly in the reign of Marcus Aurelius. However, the nature of the gifts they brought and the lack of follow-up missions suggested the Roman Empire was not as mighty as the Chinese had previously heard. However, there is no surviving Roman record of any such mission.

In his above book McLaughlin suggests that it probably did occur.

We know the Roman Emperors did exchange missions with quite distant rulers in places like India; it could e.g. make both rulers look more powerful (“See, people have come from the ends of the Earth to pay their respects to our mighty Caesar!”).

He attributes the lack of mention of any mission to China in surviving Roman records, as well as the relatively unimpressive gifts brought and lack of further visits, to the fact that the Roman Empire was otherwise seriously distracted from such exotic concerns around that time and its resources stretched by a devastating epidemic and barbarian invasion.

I am sure I have read of other, clearer references to China by ancient Greek or Roman authors, but do not recall which ones. My recollection is that they knew it was there and was a large, civilized country, but had little other hard information.

Not the answer you're looking for? Browse other questions tagged ancient-history ancient-rome ancient-china or ask your own question.

33
Did the Romans have winter uniforms?
8
How did the Greeks and Romans move between their destinations?
20
Why didn't Romans conquer/explore the African Atlantic Coast?
58
Did the Romans eat breakfast?
9
Did Ancient China use lead in their food/water industry as much as the Romans?
12
Why did the ancient Romans use groups of eight?
11
When did Northern India and N. China begin to dominate in global demographics?
37
Fermat's statement about the ancients: How serious was he?