What is the role of towers in Romanesque architecture?

I'm currently reading some books about romanesque architecture. I would like to know the roles of towers that many religious buildings have. I have some guesses, so I would like you to tell me if these guesses are true or wrong. 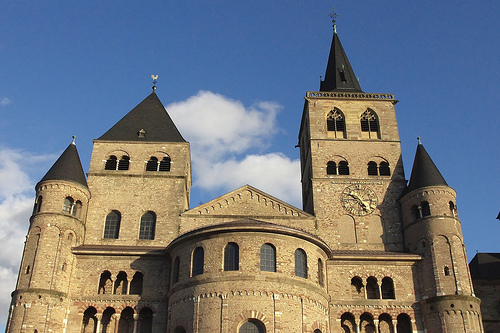 we can see small rounded towers. My guess, everytime, that kind of tower is used for stairs, eventually to defend the building at some point.

The squared tower, my guess, are present as a symbol of the gate of the celestial Jerusalem, but for what else are they used ? My personal experience push me to say : for bells, but bells don't occupy the whole tower.

Also, I'm curious if the ground section of a tower is linked to its height. 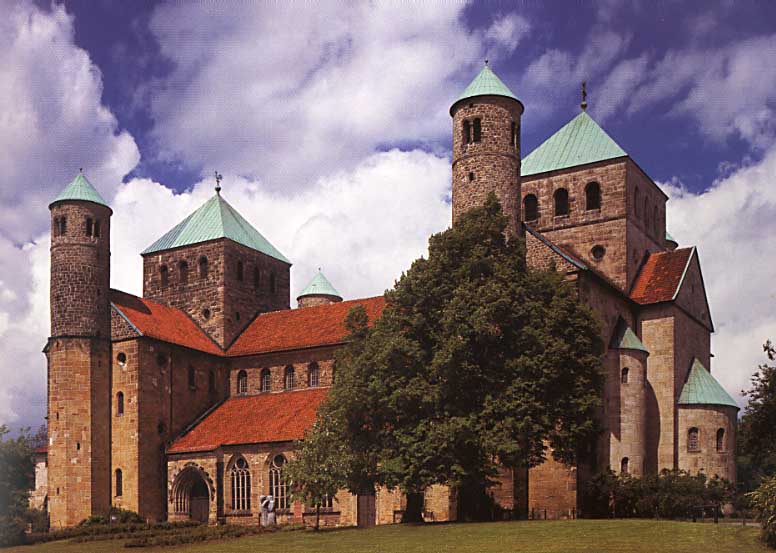 as we can see, there is only crossing towers and small rounded towers. I guess, the squared towers are used for bells too.

the part in italic contains mistake, see the comments

Too finish, it seems (maybe I'm wrong on that point) that temples used before christianity romans/greeks (pagan) had twin towers (like the one we can see on the picture of St. Pierre). So I would like to know if the celestial representation of jerusalem has it origin in roman/greek temple (pagan).

You say, "My personal experience push me to say : for bells, but bells don't occupy the whole tower."

They do not have to occupy the whole tower, but for maximum effect, they have to be hung quite high - which means that you need the rest of the tower to give height to the bell chamber and - at least in the English tradition - to give enough space for efficient work on a bellrope.

So the question might be - "What other uses did people make of the towers which they needed for bells?"

Seriously, however, I suspect the most important factor is an artistic/cultural one. Most churches from the Romanesque period onward were designed not just to be a place for communal worship. They were statements about the wealth and power of the community which built them, or the local magnate who paid for them or even about the beauty which could be produced by the work and dedication of the builders (e.g. at Chartres).

The model for ostentation was the defensive structure of the castle or the great house. These usually had towers for military reasons, but that establishes towers as a part of the "building to impress" vocabulary. As you have pointed out impressive gates at the entrance to a city are not new - cities have been guarding their entrances with fortified structures with good vantage points for almost as long as there have been cities.

So what more natural, when you want "look at me" architecture, than a building which rises high above its surroundings and can be seen from miles away? It's worth it - when thinking about medieval architecture - to imagine any town and most cities as places where nearly all the available buildings were no more than 1 or 2 stories high and built of wood. Towers of stone, reaching up to God's Heaven were a powerful statement and a psychologically unsubtle reminder of the importance of that building and those who controlled it.

Romanesque architecture It is an early architectural style characterised by thick walls and narrow windows.

Not the answer you're looking for? Browse other questions tagged religion christianity architecture or ask your own question.