Why were China and India able to peacefully co-exist for so long?

It is quite interesting to observe that for millennia, two neighbouring countries, ethnically, linguistically, racially diverse (and for some time religiously as well) were able to co-exist for thousands of years without wars in between. European powers been fighting each other for centuries, Greeks, Romans, Persians, Mongols, Arabs, etc.

How could India and China maintain the peace for that long (ignoring some recent post WWII border skirmishes)?

Because China was actually pretty far from India.

For most of the past millennia, China and India were not "neighbouring countries" in any meaningful sense of the word. Most Chinese empires did not actually stretch all the way to the Indian subcontinent. It seems you're considering China and India based on their modern borders, but that is misleading: modern China possesses vast territories beyond its historic core.

Although the Chinese established wide ranging empires at different points of history, they did so from a home country that's roughly located like the red shaded region below: 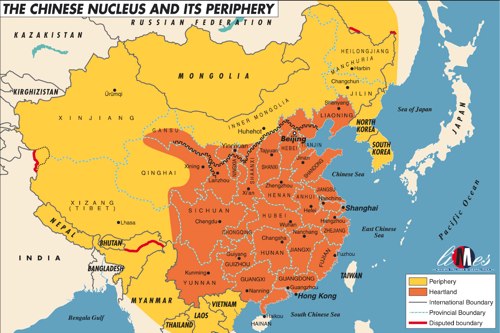 The maximum extent of Chinese empires (the yellow bits) reflected the limits of their logistics from home. This "supply range", if you will, reached its longest under the sophisticated military science of the Manchurian war machine, during the Qing Dynasty.

The hostile geography in India's direction, and huge distances involved, made it difficult for China to actively pursue war any further from home. For reference, expeditions to Korea were major causes in ruining the once mighty native Chinese Sui and Ming Empires. And Korea could be resupplied by ships.

Actually, China has not historically been particularly adept at waging large scale war over long distances. Most of China's modern conquests are a legacy of its Manchurians conquerors, who ruled China for most of the modern era up until 1911.

Now, the maximum extent of Qing rule is mostly preserved today barring Manchuria and Mongolia. If you look at the modern border, 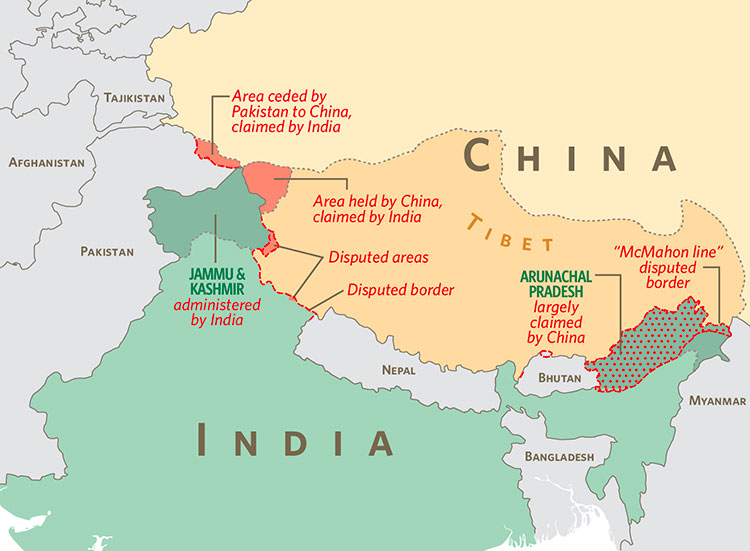 You can see that India actually neighbours Tibet and, further north, Xinjiang. Although both regions are now under the ultimate control of Beijing, that is not the case for most of recorded history.

Literally "New Territories", Xinjiang was home to a series of different peoples and polities until 1759. This regions were at times under a strong China's influence, notably during the Tang Empire, but invariably Chinese power would wane amid civil war and internal unrest. None of China's previous "conquests" here, which were often achieved via diplomatic means (notably by wedding princesses to local rulers), lasted long.

That changed only in the mid-18th century, when the Qing Empire launched a series of brutal wars that forcibly put the region into the Qing Empire in a process so bloody it has been termed a genocide.

Roughly translated: They have no appeals to Heaven and no place on Earth. They brought this on themselves. They will leave none of their seed in their homeland. Of the hundreds of thousands of families, four in ten died of disease; two in ten fled into Russia and Kazakhstan; three in ten were vanquished by our army. With the exception of women and children taken as rewards, only a handful of Oirat(?) families who surrendered remained. Other than that there not a single tent remained across thousands of miles.

-- A Military History of the Qing Dynasty, by Wei Yuan.

Once upon a time Tibet was, in fact, a powerful empire that posed a credible threat to Tang China. That did not last; however, like Korea, Tibet remained a distinct polity separate from China in most of the centuries since. While Tibet was always liable to be within the Chinese sphere of influence (again c.f. Korea), this only became more pronounced from the late 18th century onward.

It is difficult to say when exactly did Tibet fell to China. A good point however is 1792, when the Qing Empire, fresh from saving Tibet from the Nepalese invasion, was able to impose unprecedented controls on Tibet. The most important measure taken was the Chinese intervention in the succession of Tibet's religious/political leadership.

Nonetheless, as late as 1904 Great Britain could still sign a treaty with Tibet: the Convention Between Great Britain and Thibet (1904). And in 1907, two European Great Powers would declare:

In conformity with the admitted principle of the suzerainty of China over Thibet, Great Britain and Russia engage not to enter into negotiations with Thibet except through the intermediary of the Chinese Government.

This status was explicitly confirmed by China as well in 1914's Simla Accord:

The Governments of Great Britain and China recognizing that Tibet is under the suzerainty of China, and recognizing also the autonomy of Outer Tibet, engage to respect the territorial integrity of the country, and to abstain from interference in the administration of Outer Tibet (including the selection and installation of the Dalai Lama), which shall remain in the hands of the Tibetan Government at Lhasa.

China and India had peace for a long time because:

Note also that they weren't really at peace all that time either. Even when separated by large distances and the Himalayas, Chinese and Indian polities still actually did fight each other on at least two occasions:

I would also include these, but I acknolwedge they are arguable:

The answer consists of 1 word - Himalayas.

Basically, the two cultures have been completely separated by an insurmountable barrier (not to mention that the fact that India and China share a border today is an artifact of the 20th century, when China annexed Tibet).

If you look at the map,

you can see that there are highly mountainous regions covering northeastern India and Southwest China. So even if you draw a boundary line somewhere through these mountains, you can see that the desirability and likelihood of moving or fighting across these mountains is pretty slim (at least until 1962). They acted as a buffer zone between the two countries' population centers (on the eastern part of the map for China, on the southwestern part of the map for India). India's capital Delhi, is just west of these mountains, and China's capital, Beijing, is on the eastern edge of them.

The area in between includes some of the most desolate, difficult territory in the world.

They were peaceful because they didn't LOOK for wars and preferred trading with each other. Although many answers give simple reasons for NOT fighting war as a cause for peace I think that is based on the assumption that they were LOOKING for war with neighbours. But I present you a different point of view removed from the assumption that peace comes not from ceasefires or destructive deterrents nor lack of interest in invading but rather the natural tendency to live harmoniously with neighbours.

Fact is both India and China were trading with each other for more than 2000 years via the silk road and maritime routes. Himalayas are not the only route! they can go meet through Burma and we know both of these countries have been a sea faring nation for a much longer time than Europe. It has been documented Buddhism, sugar, Indian astronomy and some math, wootz steel, cotton among other things has traveled to china from India, while India bequeathed from the chinese silk, fishing nets, gunpowder and various tools among other things. Thus to say war couldn't have happened because its too far is facile as there were already long established trading routes and commodity driven markets that were apparently ready for the taking for the Europeans. In fact, if you look up the Indian ocean trade it was largely peaceful between africa, middle east india and china until the europeans entered the fold 800 years later. This is supported by John Greene of Crash Course series on Youtube.

Thus the assumption that distances are too far to wage war is a self defeating argument as there are were tons of exchange happening already for a very, very long time. China is even mentioned in the Mahabharatha.

But I am also questioning the mindset that to have peace only the absence of war is necessary. This maybe true now, but as I have demonstrated peace existed among the most economically strong countries such as India and China for millennia without having to wage constant wars. There have been many instances in history, but not really touched upon in western history books, of cultures conducting business and exchange largely peacefully for centuries without resorting to military support.

As mentioned, the two areas have been historically very decoupled. Very few (any?) crops moved from one region to the other in antiquity. Agriculture and writing seem to have evolved independently in both areas, implying lack of contact. Ironically, the region with the most extensive cultural transmission in Asia was Mongolia/Siberia, since the people there were much more nomadic.

Not the answer you're looking for? Browse other questions tagged india china international-relations asia or ask your own question.

5
When and why China started to make a difference in the superpower arena?
101
Why China was able to unify and not Europe?
17
Why was 19th-century Japan able to modernize and not China?
13
Why did Nepal and Bhutan not become a part of India like other princely states when colonial rule ended?
4
Why were the populous coastal areas of China not linguistically united?
33
If the Ch’in dynasty was so short-lived, why was China named for it?
3
Were British plans for India disrupted by WWII?