What was the reason for US Fed rate increase in spring 1928?

I was reading this wikipedia article on the great depression of the 1930s. This timeline mentions that in 1928, USA Fed increased interest rates. What was the reason behind this move.

I read elsewhere that a lot of gold flowed into US during and after WW1. After WW1, other countries wanted to buy more gold from markets/US to go back to gold standard. A deflation followed WW1 as more goods were available now and lesser people to buy them. So, the interest rates should go down to entice people to borrow more. But interest rates were increased. Why ?

If the international demand for gold was higher, the price of gold should automatically go up. How does Fed's rate increase affect demand/supply of gold. What was the reason for rate increase?

What did the Fed mention its reasons were?

I think I am missing something here. Request help for clarity on this point.

I think you are forgetting that the inflation rate during WWI was staggering. The consumer price index at the end of the war was extremely high, and the deflation that you are referring to can be seen as more of a adjustment in pricing back toward pre-war levels. In fact the CPI was relatively flat through the 20s as a 10 year moving average: 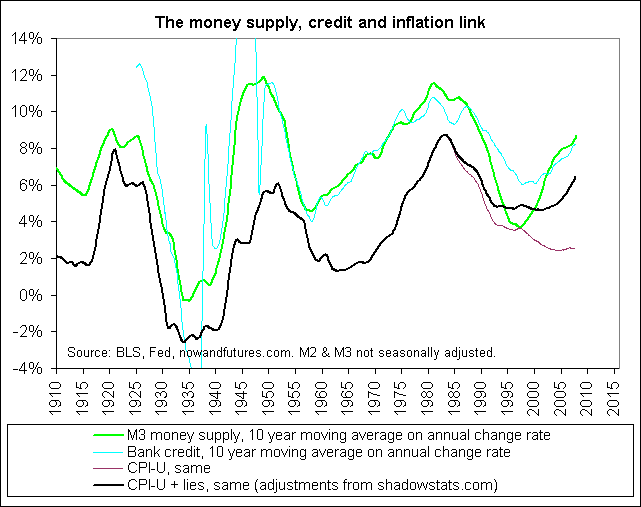 In 1928, equity prices were booming due to the increase in the money supply, and the Federal Reserve feared that this was a speculative bubble driven by low interest rates. The Fed's action was intended to encourage people to move money from investing in the stock market toward bank savings in an effort to stabilize the economy, not to borrow. 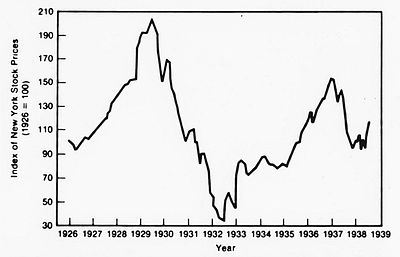 As far as the price of gold, remember that with a gold standard, the price of gold largely is inflation. Prior to the Glass Steagall Act in 1932, the Federal reserve was required to back 40% of all Federal Reserve notes with gold, and this is consistent with the ratio of Fed holdings during the period. You can see the effect of Glass Steagall in the graph below where it remains relatively flat through 1932 when there is a sudden spike in bond holdings compared to gold: 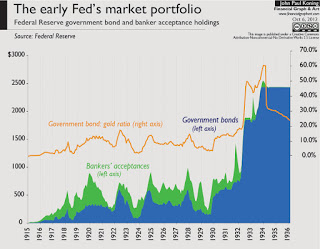 That means that the price of gold is driven by the size of the money supply, so changes in interest rates would theoretically drive real gold prices largely to the extent that they expand or contract the money supply. Exchange prices of gold internationally would be more of a measure of the relative strength of the exchanging nations' economies.

Because in 1928 macroeconomics hadn't been invented; until Keynes, people had odd ideas about money supply, inflation, and economic growth. Both of the other answers point to the fed's fear of liquidity. If you kill liquidity, then you kill speculation and all is well. Mundell-Tobin theory suggested that raising interest rates would raise the velocity of money but somehow reduce the real interest rate (the rate which motivates investors and changes their behavior). By raising interest rates, you discourage speculation.

Furthermore (quoting from the wikipedia page you reference)

Right now I cannot find references to back it, but to answer your second question, the Fed had no obligation to announce the reasons for its actions. The Fed's actions were not not transparent. The Fed were technocrats who did what they thought was best with the theory they had. I don't think transparency was required until the Humphrey Hawkins act of 1978

Not the answer you're looking for? Browse other questions tagged economy great-depression or ask your own question.

9
What was the reason for inflation in Britain after the Black Death?
6
What were the factors behind the lowest AAA corporate interest rate in U.S bond history during 1946?
1
What was the most important change that took place in American society as a result of the New Deal?
5
Why did the death rate increase in US cities in 1934, when it decreased in each year from 1929 to 1933
3
During the Great Depression in America, was there an increase in popularity of Communism?
6
What was the expected retirement age for men in Spain in 1936?