I wonder, does such logic apply to large islands as well, where there is of course much less variation in climate? For example, Indonesia's two main islands are Java and Sumatra. Java is the 13th largest island worldwide, and the most populous and lies from the west to the east. Sumatra is the 6th largest island by area, and 5th by population and lies mostly north-south. 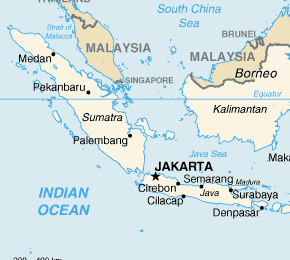 Despite Sumatra's larger area, Java has bigger population, more power and influence (the capital, Jakarta is in Java, and most of Indonesia's political leaders have been from Java) and is better economically. Does the orientation have some impact to this?

The problem with the Thesis in Gun, Germs, and Steel is that we have one example of an E-W megacontinent (Eurasia) and one example of a N-S one (the Americas). Africa is a bit small, and vague on E-W vs N-S.

The Island comparison probably fails due to the small size of any island, so the different terrain zones are similar.

In the GGS book, the NS orientation is appointed as only one of the reasons that Eurasia was more developed than America and Sub-Saharan Africa. It also considers narrow points and bottlenecks (e.g., panama) which hampers migration and technology spread; the fact that American corn was less efficient in calories-hour than Chinese rice or Eurasian wheat; diseases and immunology; existence of suitable domesticable animals for cargo and work; and some other factors.

So, considering only one factor is already a weak argument. Besides that, the NS orientation only hampers technological spread if the climate differences are large. We should ask if primitive solutions in agriculture, societal organization, health, transportation, communication, weather forecast, food storage, etc, that work in one area, still work in the other area.

Egypt/Sudan (river surrounded by desert for some thousand km): I guess if something works in Low Egypt it is still more or less valid in High Egypt, at least when close to the Nile. So this argument is not applicable in Egypt.

Africa: The coast of Magreb is much more amenable to agriculture and civilization than the Sahara. Then Sub-Saharan Africa is tropical (tropical diseases, heavy rain, heat, different fauna and flora), very different from Magreb. Going south you have deserts again, in namibia, and an almost temperate climate in South Africa tip. I guess that a primitive tribe or city-state from Tunisia would not easily thrive if teleported to Congo. So we can apply the argument to Africa, although not as strong as in America.

For an island, it would need a very large island for the argument to start to make sense. A primitive tribe from Aceh (north Summatra), if teleported to Eastern Java, would still be able to farm with similar techniques? Still have access to the same kind of pack animals? Similar natural resources? Similar diseases? I guess these are not extremely different climates.

Besides that, the argument is not so valid anymore after faster transportation, large scale commerce, education, large countries. It was not so valid even in colonial times. The book deals with the emergence of civilizations, not with comparing current developments.

If the NS-orientation argument is valid for Java/Sumatra, then North Sumatra should have been already less developed than Java 1000 years ago, well before the dutch and muslims!

Did the muslims or the Dutch helped Java in some way to overcome Sumatra? I guess, for example, that Java was more important in spice trade than Sumatra, since the most famous spice islands are east of Java. Besides that, the dutch capital was in Java, this should help development.

Not the answer you're looking for? Browse other questions tagged geography indonesia south-east-asia or ask your own question.

20
What were the demographics and economics of South-East Asian islands around year 1400?
12
State boundaries in mountainous regions
2
Why didn't Indonesians/Indian Ocean traders bring marsupials to Asia and placental mammals to Australia/New Guinea?
2
Was the strait of Malacca a potential "chokepoint" during the age of discovery?
17
Why wasn't awareness of Australia more widespread in pre-colonial Asia?