Italy was created by a small elite at a time when more than 90% of the peninsulaâ€™s inhabitants did not speak Italian. (Source: Special Report on Italy, June 11th, 2011, p. 3)

Only 2.5% of Italyâ€™s population could speak the Italian standardized language properly when the nation unified in 1861.

Are the above claims true and if so, what evidence is there for them?

The claim is true if we take "Italian" as meaning modern standard Italian.

At the time of Italy's unification, what we know today as "Italian" was more of a literary language than a vernacular one. The 2.5% figure cited is a lower bound figure, but the higher end only goes up to 12% or so. Either way, only a small minority of Italy's inhabitants spoke it. That's because what we call "Italian" was only one of many descendants of the ancient Latin language.

In fact, modern standard Italian was merely Florentino, a dialect of the Tuscan language spoken in Tuscany. In other regions of Italy, multiple different languages (some Romance, some not) dominated. Understandably, and unsurprisingly, few common folk outside of Florence and the city's hinterland spoke the Florentine dialect when it was chosen to be the national language in 1861.

Florentino's adoption as the Italian national language reflects Florence's cultural prestige. Notably, Florence native Dante, called the Father of the Italian Language composed his works in that language. His Divine Comedy helped established Florentine as the literary language of Italy, a statue enhanced by other literary giants writing in Florentine. This however did not replace the local vernacular language of each region.

Even today, regional languages are still quite alive on the Italian peninsula: 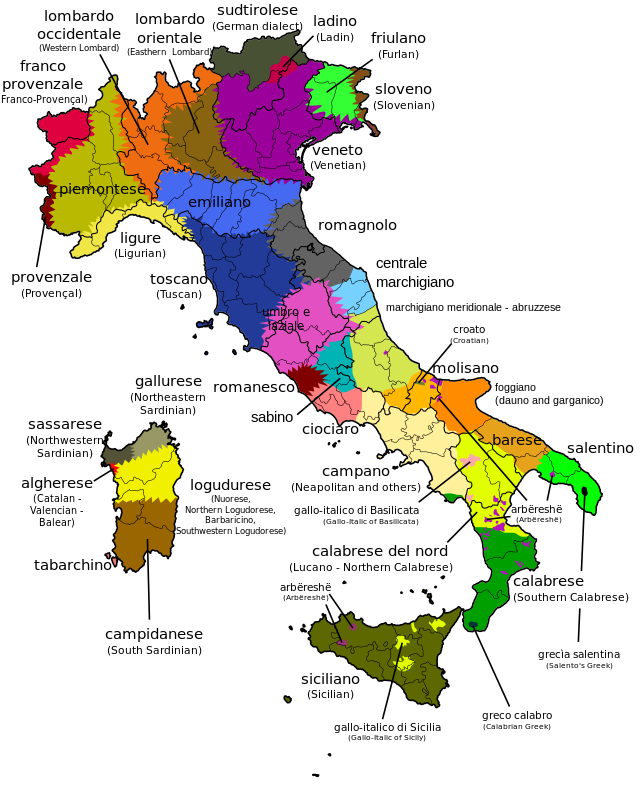 Semaphoreâ€™s answer is largely, but not entirely correct. The standard Italian language is based mainly on the written language used by late-mediaeval authors like Dante and Petrarca. They wrote in Florentine as it was then spoken, but modern Florentine has moved on from this. For the example in standard Italian you write â€śla casaâ€ť and pronounce it as it is written /la kasa/, but in Florence and Tuscany people actually say /la hasa/. This is because Florentine has changed since the time of Dante. The standard language follows the literary language, not the spoken idiom in Florence.

20
When and how did classic "Italian" cuisine come to be?
12
Did any Ethiopian leaders help the Italians?
31
Why did so many Italians emigrate to Argentina?
30
Was the Italian campaign a strategic mistake?
16
Was Islam really responsible for the Italian Renaissance?
10
Which of the Nuremberg defendants spoke English, French, or Russian?
6
Were the Quebecois ever considered higher-class because they spoke French?
6
Please identify this WW1 Italian Uniform