Were there any conquests that Ancient Rome undertook explicitly to gain control of a natural resource?

Was there ever a case when Rome conquered a territory solely for the purpose of gaining control of a specific resource (spice, ore, timber, etc....)?

I'm looking for something backed up by historical evidence - e.g. a document from a military/civilian leader, a public speach etc... admitting to such motivation.

Please note that I'm only including extractable natural resources here as understood today - e.g things like slaves, extra economy, markets, waterways or strategic territory are NOT in scope.

At one point, the Romans extended the frontier in central Germania to swallow up a modest bit of land that was rich in silver mines. IIRC this was around the time of the Emperor Domitian.

Sources: The primary source was from The Grand Strategy of the Roman Empire by Edward Luttwak. It discusses the annexation and mentions the region as securing some fertile land and supporting a friendly tribe, as well as pressing on the hostile Chatti. It also provided a buffer for Maintz and the flank of the annexation of the Agri Decumantes to the south.

However I did find a supporting remark from Tacitus' Annals Book XI, 20, from the time of Claudius:

Nor was it long before the same distinction was gained by Curtius Rufus, who had opened a mine, in search of silver-lodes, in the district of Mattium. The profits were slender and short-lived, but the legions lost heavily in the work of digging out water-courses and constructing underground workings which would have been difficult enough in the open. Worn out by the strain — and also because similar hardships were being endured in a number of provinces — the men drew up a private letter in the name of the armies, begging the emperor, when he thought of entrusting an army to a general, to assign him triumphal honours in advance.

Here Curtius Rufus gets triumphal ornaments by sending his troops over the border to do some quick work Silver Mining in Germany. This is the same area that the lines would later extend out to encompass a generation or so later.

Whele senators and ordinary civilians could justify a war with such considerations, the official pretexts for the wars were always different. All wars Rome conducted were officially motivated by international law. Particular motivations being:

It should be noted that "we just will conquer you" statements are quite rare in world's history. This is because if you use such arguments, you will experience problems in the future with concluding any treaties with other peoples, thus diplomatically unwise.

The most close possibly being Islamic conquests which were based on theological arguments.

The only (to my knowledge) province that Rome brought under its control primarily based on a resource need was Egypt. Egypt, and to a lesser extent, north Africa, were the so-called "granary of Rome". Egypt was a necessary supplier of grains in a time where Rome (the city) and the standing army were growing, and an increasing number of citizens was relying on handouts by politicians or the state - the so-called "plebs frumentaria". At its apex Rome imported approximately 350000 tonnes of grains each year and 200-300 thousand citizens were living off handouts. Egypt also offered good connections to Asian trade routes. But if trade is considered a resource, then the Punic wars and the Hellenic wars might also be considered a resource driven assessment.

As user357320 already mentioned, the annexation of Dacia and Iberia also had some economic agendas, but that was not the main reason given at the time.

Also, here is a picture of where you find what resources: 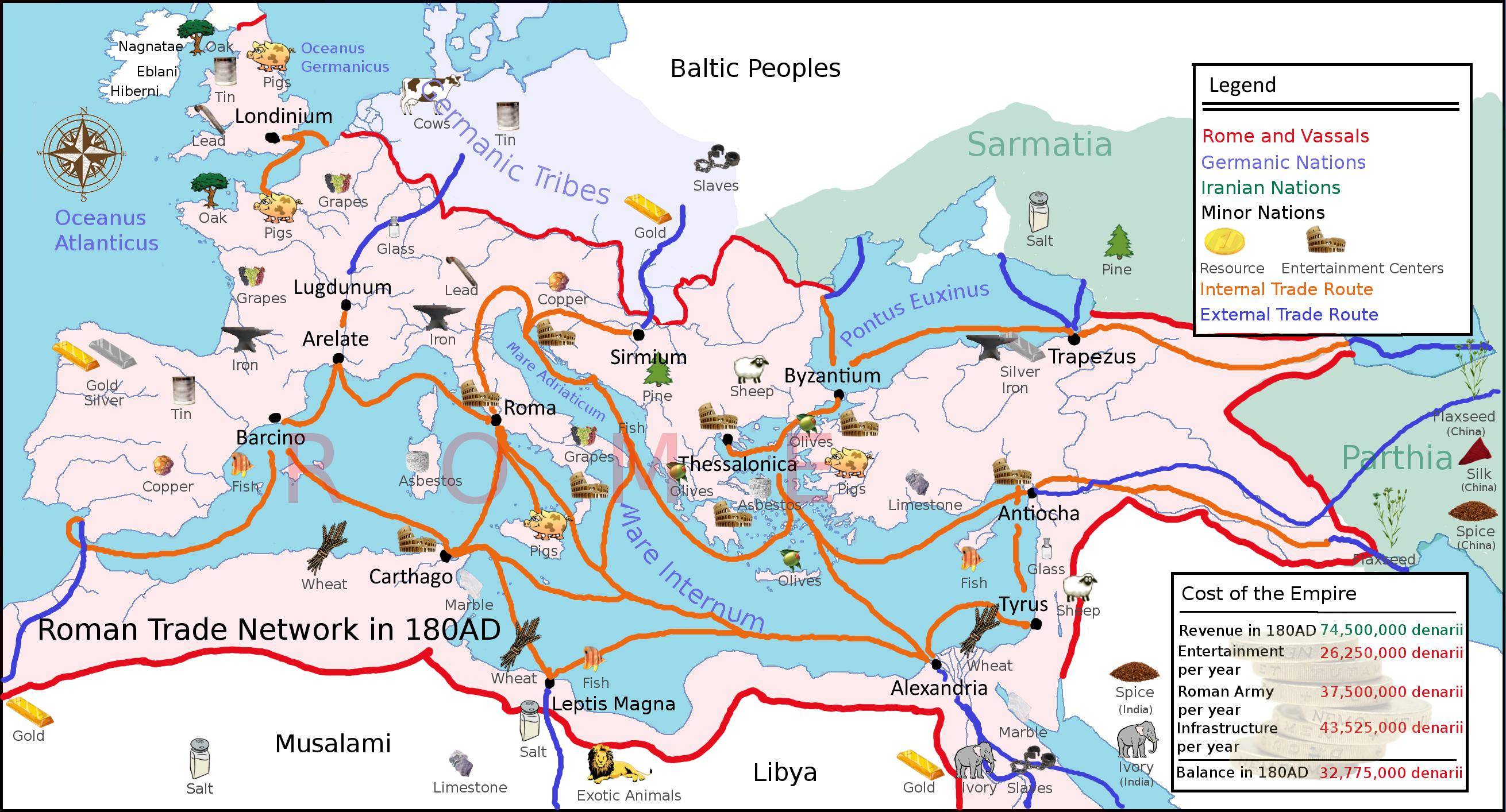 Several Roman authors criticised Roman imperialism. Two that I am aware of include:

• Sallust, De bello Iugurthino. The book however traces Rome’s warlikeness back to inner politics, not acquisition of resources.

It was always my understanding that the Roman conquests in Spain and Dacia were motivated by their respective gold and silver mines.

27
When did countries begin making up a pretext before starting a war?