Were the 1940-42 RAF bombing raids over Germany unescorted?

Considering the Spitfire's chronic lack of range, was the RAF doing unescorted bombing runs over Nazi Germany in 1940-42 or did they have another fighter that escorted their bombers?

Most bombing by both the RAF and USAAF was partially or fully unescorted.

Early in the war, virtually all long-distance bombing raids took place at night to avoid the possibility of interception. The Germans used searchlights and AA guns to try to combat this. Later in the war they developed night fighters.

The diagram below shows the evolving range of possible escort during the war: 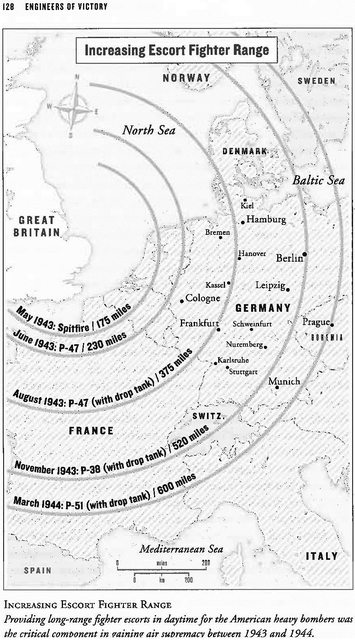 As you can surmise from the diagram, before 1943 any bombing beyond the area of the English channel or other allied bases was unescorted.

The RAF, as a general rule, conducted all of their bombing operations against Germany at night. Escorts were not really necessary under these conditions and probably would have been more of a liability than any protection. The USAAF believed that they could conduct precision daylight bombing and executed their operations against Germany during the day. The American leadership initially believed that the B-17 and B-24 bombers were so heavily defended that they would not need to be escorted. When this was proven to be incorrect, it lead to the rapid and joint British-American development of the P-51 Mustang (North American air frame with a Rolls Royce engine). The P-51 became the best all-around fighter of the war. It should be noted that the British bombing operations at night were highly successful, albeit inducing civilian carnage that today's society would have fits over.

Not the answer you're looking for? Browse other questions tagged world-war-two aircraft or ask your own question.

20
Did Hitler not intend a major war while invading Poland?
15
What factors discouraged the Nazis from focusing all their forces on the Caucasus region during Operation Barbarossa?
8
Did the Germans have enough bombers to conduct "strategic" bombing of the Soviet Union?
7
How many tons of bombs were dropped on Britain between 1940 July 10 and September 7?
12
Which Allied aircraft scored the most air-to-air kills against the Me 262 in WWII?
14
Which RAF squadrons and aircraft types took part in the bombing of Berlin on the 25th of August 1940?
1
Why were Axis bombings deadlier than Allied ones?
3
During the WWII, did the German Luftwaffe ever have mixed units of Bf-109s and Me-262s, and if so, which units and/or which airfields?
6
How effective was the (Western) Allies bombing campaign over Germany in drawing down the Eastern Front Luftwaffe?
25
Was there a fighter jet designed without cannons?