How was Euclid's Elements likely written?

How was Euclid's Elements written? I mean, what type of paper, ink and pen did Euclid likely use?

As I guess there is no definite answer on this, you can also answer:

How did people in 300 BC write in ancient Greece?

Was writing at that time comparable to writing on a modern paper with a modern pen (especially regarding speed / accuracy)?

The ancient Greeks wrote the same way as the Egyptians: on papyrus scrolls. The oldest European manuscript I know of is the Derveni papyrus which is a Greek scroll dated to 362 B.C.. The writing was made with a narrow brush rather than a pen. The Greeks also wrote on clay, such as the fragments of broken pots (ostraka). Students would write on the ground or on wax tablets which were a layer of beeswax recessed into two boards which had a thonged hinge, so they could be closed together: 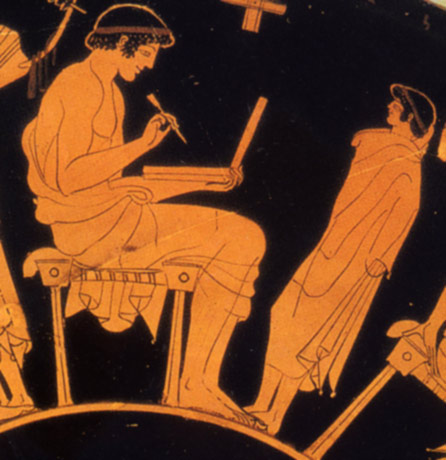 The wax was engraved with a pointed wooden stick called a stylus. The reverse end of the stick had a spatula which could be used to erase, as can be seen in the image above.

The writing on papyrus was relatively slow compared to using a pen, because it was brushed on. This was unimportant though, because when something was written to papyrus (very expensive) it was usually an important work, so the amount of time taken to write it was not important. If they wanted to write notes or something fast, wax would be used, which was reasonably fast. In some cases charcoal was used to take notes on a convenient surface like clay or stone.

Euclid, like other ancient authors, would probably have dictated his books to a literate slave, who wrote them down on wax tables, with a stylus, as Tyler has described. The tablets would then have been passed on to a professional scribe (also a slave), who copied them on to scrolls made of papyrus.

Not the answer you're looking for? Browse other questions tagged ancient-greece technology or ask your own question.

19
How can prices be compared over time?

2
How was the Spartan "300" battle recorded?
4
How were documents written in Plato's time?
7
How would ancient Greeks have exercised?
10
What was the primary motivation for a historical figure like Xenophon to create an extensive collection of written material?
36
Fermat's statement about the ancients: How serious was he?
8
Were Draco’s laws particularly “draconian” at the time they were enacted?
2
Were there clay printing presses in the bronze age?