Why is there a Herakles/Hercules sarcophagus?

I recently visited the Archeological museum of Antalya, seeing two 'Herakles sarcophagi' like this one, depicting his twelve labours.

As far as I saw, gods and other mythological characters are represented with statues, on frescoes or such supports. But not on sarcophagi.

My question is, what/who was this Herakles sarcophagus for? I thought so far that he is revered through a sarcophagus (I would be curious why), it is actually his sarcophagus and the story around him has been embellished, it is a mere mortal sarcophagus and its owner was compared with Herakles or was proud of himself. These might sound ridiculous but I have so far not found an explanation.

To answer your immediate question, the sarcophagus would have been for a wealthy Roman. In the case of the Genzano sarcophagus you cite, like many similar ones, the name of the deceased is unknown.

During the high Imperial period of Rome, 200-400 A.D., sarcophagi such as these were popular. They were often decorated in high relief and contained mythological scenes, often involving death or the underworld. The Labors of Hercules was a popular theme. Note that the last of the labors was to retrieve the hound of hell, Cerebus, and bring him out of Hades. Another common theme was Hercules rescuing Alcestis from Hades. The myth of Persephone, who was kidnapped by Pluto and became the queen of Hades, was an extremely popular theme for sarcophagi. 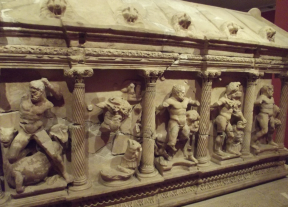 The style you saw at Antalya, shown in the photo above, is typical, with a temple-like roof and high-relief panels separated by Corinthian columns.

Some moderns may find it a little odd to have superhero mythology on a burial container--sort of the equivalent of having Batman comics on your coffin--but for the later Romans such things were common. They also decorated their houses with exactly the same kinds of art: Hercules, myths, scenes from the gods, and so on.

There was a professor at Barnard named Marion Lawrence who devoted her career to studying classical sarcophagi and you can research the topic by reading her papers.

Not the answer you're looking for? Browse other questions tagged death greek-mythology or ask your own question.

8
Are there any records of ancient people looking for the misdirect in a prophecy?
13
Why did Japanese samurai disembowel themselves?
3
Are there any images from ancient times in which Heracles is shown with a cornucopia?
2
Why did Meriwether Lewis think that William Clark was coming to help him just before he killed himself?
3
What evidence is there that Lenin died because he was poisoned?
3
Why were there so many US military deaths outside of the major battles in WW2?
2
In the painting “Ariadne”, by Arthur Streeton, why are the sails of the ship white?