What was the internal Soviet reaction to the moon landing?

The Soviet Union was a famously restrictive place when it came to news and ideological spin, and obviously their attitude toward the United States was less than supportive and warm. The Space Race saw a lot of competitiveness between the two countries, but when the United States landed a man on the moon, the language they used was very universal. They phrased it very much as a victory "for all mankind," and there was a lot of talk about all people on Earth being "one."

Of course, that's easy to say when you just won the race.

What was the internal Soviet response to the news? Did the Soviet citizens know it was happening at the time? Was it spun as a victory for humanity, or a victory for the United States, or a loss for the Soviet Union, or what? Was the story reported accurately, or were details changed in the retelling?

TL; DR: Landing on the moon was covered in the Soviet press, and was well known in the Soviet Union. It received much less attention than Soviet space missions, though.

Just to add something factual to previous answers.

Soviet Academy of Sciences president Mstislav V. Keldysh called voyage "a big contribution to space exploration and further progress of world science." Cosmonauts send message to Apollo 11 crew: "We... closely followed your flight. We wholeheartedly congratulate you on the completion of your wonderful journey to the moon and safe return to earth."

Scanned imaged from Soviet newspaper available on this page from arhivtime.ru. It is claimed to be from "Pravda" issue of 22 July 1969.

Excerpts from an article:

We highly appreciate the flight of the American spaceship "Apollo-11", in which two people - Neil Armstrong and Edwin Aldrin first set foot on the lunar surface. Spaceship and its many systems withstood a serious challenge. One can do nothing but admire the courage and self-possession of cosmonauts, who bravely met the unknown. They first landed on the surface of our natural satellite in the moon unit. New challenges are no less complex - ascent from Moon surface and rendezvous with orbiting spaceship

I take this opportunity to congratulate the cosmonauts with outstanding success and wish them a safe return to Earth.

Neil Armstrong's visit to USSR in 1970

In May 1970, Armstrong traveled to the Soviet Union. He presented a talk at the 13th annual conference of the International Committee on Space Research. He met Premier Alexei Kosygin and was given a tour of the Yuri Gagarin Cosmonaut Training Center.

Excerpt from Astronautics and Aeronautics, 1970:

June 2 (p. 190): Apollo 11 Astrounaut Neil A. Armstrong, on goodwill trip to U.S.S.R., watched TV broadcast of Soyuz IX launch during party in his honor in Moscow and was told by Cosmonaut Georgy Beregovoy that mission was "especially in honor of your trip here."

Armstrong later presented moon fragment and small Soviet flag carried on Apollo 11 mission to Soviet Premier Aleksey N. Kosygin. Kosygin said he would "always cherish this gift as a symbol of a great achievement." He told Armstrong, "The Soviet peoples are second to none in admiring your courage and knowledge."

DISCLAIMER: The rest of this answer contains personal opinion and partly based on the experience of communication with the people, who lived in the Soviet Union in the 1960s.

What was the internal Soviet response to the news?

Soviet officials and media praised astronauts and first moon landing was recognized as an exceptional achievement.

Did the Soviet citizens know it was happening at the time?

Soviet people were surely informed about it. Newspapers published articles on Moon landing, reports were broadcasted on TV and radio. Neil Armstrong, and Buzz Aldrin were widely known in Soviet Union.

As an achievement of the US space program and a victory for humanity. Certainly, it wasn't described as a victory for the United States/loss for the Soviet Union.

Soviet publications on space were largely centered around Soviet space program and its achievements. Sputnik, Gagarin's flight, first walk in space, various unmanned probes were largely praised as landmark achievements. In comparison, Moon landing was rarely mentioned and was never presented as a political victory for US.

Was the story reported accurately, or were details changed in the retelling?

The story was reported accurately. Soviet Union never tried to dispute the veracity of the moon landings. Again, highly-detailed reports on the event probably were never published in USSR.

Well, the USSR did not conceal the event from the public. The official position can be described as follows:

It was indeed reported, but as a non-event, buried in the middle of the newspaper. One had to pay close attention to learn about it and realize the importance of the event.

Napoleon is reading "Pravda", while, say, Ney is watching the TV report from the November 7th military parade in Moscow.

More to the point, the Lunar Landings were compared with the Soviet programs, e.g., Lunohods, as

Those "in the know" (i.e., those who could see though the propaganda and/or had inside information) were impressed (see Черток "Ракеты и люди" - Chertok "Rockets and People") and, depending on personal inclinations, happy, jealous, envious, etc. But these were a small minority.

Since the answers so far give conflicting accounts on the amount and/or tone of reporting, I decided to add some material so that everyone can judge for themself.

The report in Pravda on 21.07, titled "Cosmonauts on Moon", looks like this:

It is clear from the text that the bulk of it was written when the outcome of the landing was unknown and ushered to the print, because, funnily oscillating between future and past tense, it describes how the landing was supposed to have proceeded (between the time of writing and the time of publication). Only one paragraph in the end indicates that reportedly, all went according to plan. 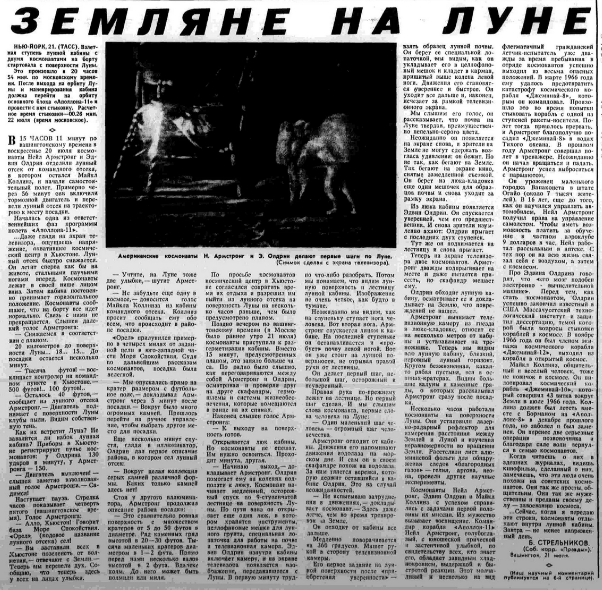 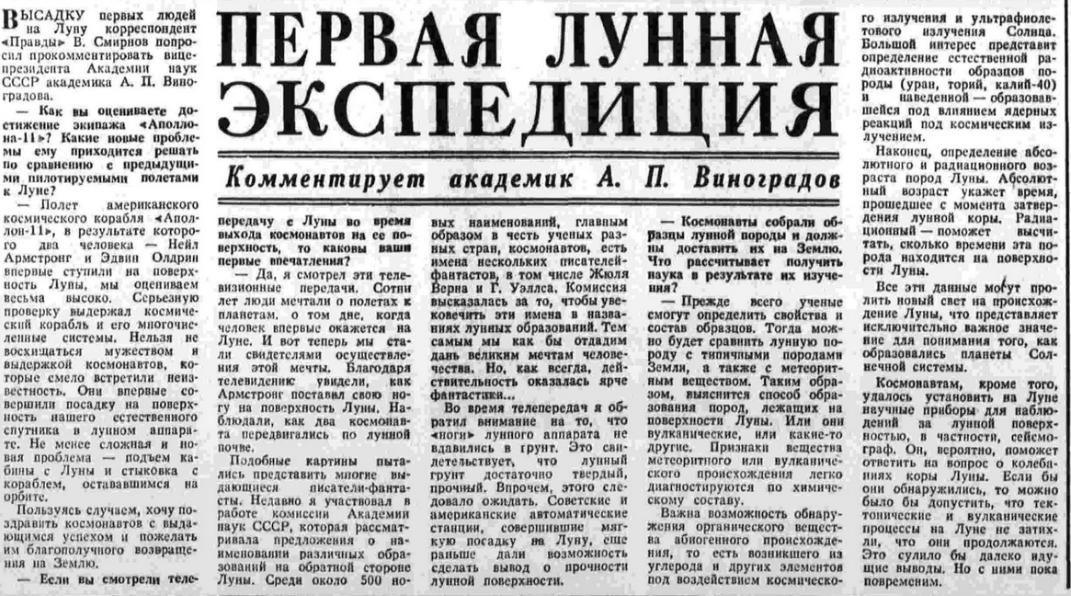 The first one is a pretty lucid account of the mission (with the "giant leap" quote, reporting jokes between astronauts and Houston etc.) and biographies of astronauts. It concludes with a paragraph that personally, the astronauts are very much like Soviet cosmonauts - easy going and amicable, brave and devoted to their mission of space exploration.

The second one is a commentary/interview of the vice-president of Academy of Science. default_locale has already presented a translation of the answer to the first question, but other citations are also of interest. For example: "For centuries, people dreamed of flying to other planets, of the day people will be on the moon. And now we are watching the dream come true"; highest praise possible. Also, the interviewer asks whether the scientist has watched the translation from the Moon, and the answer is "yes", rather puzzlingy: - surely enough Soviet TV did not show it live? The final part discusses scientific objections of the mission; the scientist praises its importance; saying that especially finding seismic activity of the Moon would be a big deal. No mention or comparison with Soviet probes is done here. This is perhaps not a surprise, since Soviet probes didn't manage to deliver any samples yet - in fact, Luna 15, the last-ditch attempt, crushed into the Moon on exactly the same day 21.07.

For completeness, here is the scan of the first page of Izvestiya on 21.07: 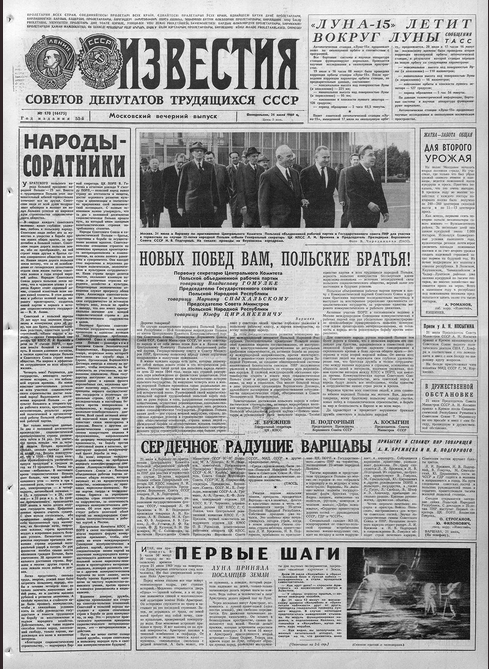 This one does have Moon landing on the first page (lower right corner), with reporting continuing on page 3. The upper right corner is Luna-15, saying that it is circling the Moon. The rest is Brezhnev in Poland.

All in all, we cannot say that it was buried, downplayed, under-reported or criticised - the reporting was rather extensive and enthusiastic. I didn't find a word of criticism, nor a mention if being built up on earlier Soviet successes. Of course, it is true that this was nothing compared to reporting Soviet space program: 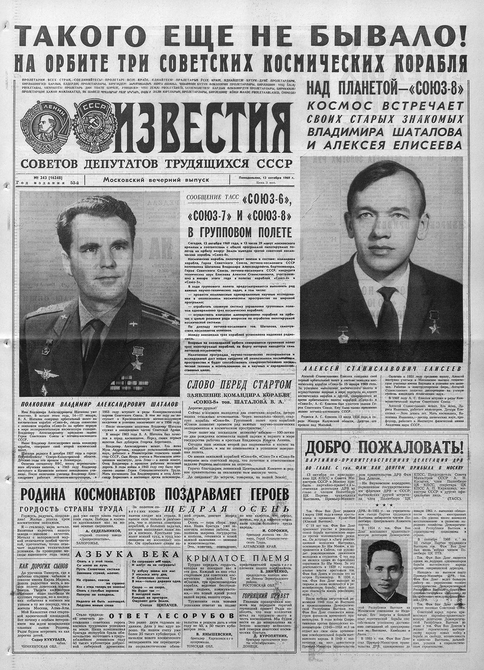 This is October 1969 fairly routine low-Earth orbit launch of Soyuz 8 - naturally, 8-th launch of Soyuz and 16-th in total. The caption says "This was never seen before - three Soviet spacecrafts in orbit!", the big portraits are of the cosmonauts, and the entire page except for the box in the lower right is devoted to the mission. Maybe they were just lucky that Brezhnev did not visit Poland that day!

14
How were the Venera Probe missions received/presented in the Western world during the space race?
1
What did the technologies of von Braun and other members of the Third Reich contribute to America's lead in the race to moon against Russia?
3
How did the US vet Soviet refugees for possible spies/infiltrators?
7
What was the impact of Fischer vs. Spassky 1972 on the relationship between the USA and the Soviet Union?
5
What were the international space arrangements and scientific purposes Eisenhower spoke of in October 1957?
21
Did the Soviet leadership ever address the American people on American TV?