You could check Wikipedia

In the immediate post-World War One period, Skalat was seized by local Ukrainian activists, who declared that the town was part of West Ukrainian People's Republic. Polish - Ukrainian tension escalated, and climaxed in the Polish–Ukrainian War. On April 23, 1919, Ukrainian activists murdered a popular Roman Catholic parish priest from Skalat, Rev. Walerian Raba, and on July 16, 1919, the town was captured by the Polish Army.

In 1923 Skalat became the seat of a county in the Tarnopol Voivodeship.

Tarnopol Voivodeship was an administrative region of interwar Poland (1918–1939)

There is also a Map in wikipedia where you can see, that Skalat is near the border to USSR (Ucraine). 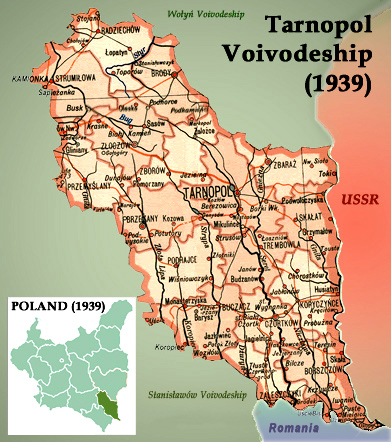 Another source, outside Wikipedia:

SKALAT (Pol. Skałat), town in *Tarnopol district, Ukraine. Formerly within Poland[...]reverting to Poland between the two world wars.[...]As a result of Skalat's proximity to the Russian border,[...]

You see, the town is near the border and changed the ruler.

Not the answer you're looking for? Browse other questions tagged world-war-two maps or ask your own question.

9
Where was the pre-war (ww2) border between Poland and Germany?
18
Have Germany and Poland ever signed a peace treaty after WWII?
1
What are the height units of contours on this WW2 topographic map?
3
Why did the Soviet–Japanese Neutrality Pact take 2 years to sign after the Battle of Khalkin Gol?
13
How fortified was Cyprus during WW2?
5
In early WW2, how much of the merchant marine was American?
2
Is there a location to find the personnel roster of the No. 300 Polish Bomber Squadron during WW2?
1
Can anyone tell me if this is legit WW2 Nazi ring?