Has the USA offered aid to every sovereign nation? [closed]

Requests for trivia or basic historical facts are off-topic if they can be easily answered by looking up the relevant topic on Wikipedia. We're trying to complement common historical references, not duplicate them.

Note: I thought of the Confederacy, but apparently it was not a sovereign nation.

The US very often offers aid, in cases of disaster as mentioned by Oldcat, but also to countries that are having economic or security issues. As pointed out by Semaphore the answer to the question is: No, not all countries that exist/ed at the same time as the US have been offered aid to

I also think it's important to understand what exactly is "aid" between governments and this isn't exactly what you would call "helping your friend".

Usually, when accepting aid, recipient countries can only spend the money in certain ways, with certain companies, from certain countries, often to the disadvantage of the aid recipient. An example:

However, non-government organization watch groups have noted that as much as 40% of aid to Afghanistan has found its way back to donor countries through awarding contracts at inflated costs.

Other times, aid is given as a covert way of undermining unfriendly governments:

In situations where the U.S. is hostile to the government of a country, USAID may be asked to undertake programs that the government would not accept and thus to operate without the government's knowledge. This might include USAID support for opposition political movements that seek to remove the government. Such "political aid" is criticized by some as being incompatible with USAID's role as an assistance or cooperation agency and as exposing USAID staff worldwide to the suspicion of being covertly engaged in subversion.

Aid recipients are also expected to align themselves politically with the donor:

Wikipedia with sources for all three citations and other examples there

Recently, many recipient countries are taking steps to minimise or terminate USAID programs in their countries. USAID has a particularly bad reputation in South America, where ALBA countries are demanding it cease operations, and the Middle East: 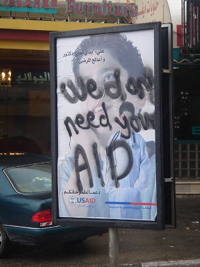 It is a bit naïve to think that large powerful governments can allow themselves to be altruistic. Usually their job is to work for profit, economical or political.

I'm sure that in the case of disaster relief, the US offers any aid that they can as a matter of routine. Often this involves military units, since they have the vehicles and training to go into areas where the infrastructure has been destroyed, and they are able to move at a moment's notice to remote parts of the world.

Not the answer you're looking for? Browse other questions tagged united-states international-relations political-economy nation-states or ask your own question.

9
Does O Henry's story "Georgia's Ruling" describe history?
3
Has the USA ever taken unilateral military action?
5
Was there really a labor shortage in the USA until 1970?
63
When has a sovereign state last given territory to another as a gift?
52
How did the authorities not find the speakeasy clubs during the prohibition?