What was the impetus behind the British Empire's acquisition of what is now Canada?

What led the British to Canada as part of a plan to colonise North America?

There are no good natural resources in Canada and, from what I can see, there was no point in getting a military stronghold there at the time.

British Colonisation of Canada began with Newfoundland, claimed by England in 1583. This early English interest was in fishing: Newfoundland contained excellent fishing grounds, and fishermen of the West Country steadily became regular visitors to the region over the ensuing decades.

In addition to fishing, Newfoundland was seen as "freely" available land for settlement and agriculture. For example, the Welsh colonial founder Sir William Vaughan thought the land was "reserved by God for us Britons" and planned his colony "so as to make agriculture and fishing mutually interdependent". Permanent settlements began in 1610 with the chartering of the Newfoundland Company, at sites including Cupert's Cove, New Cambriol, and Bristol's Hope.

Most of these soon failed, but a popular migratory fishing station, Ferryland, went on to achieve lasting success as the Colony of Avalon (that is, until the French burnt it down). France eventually ceded the area to Britain in the Treaty of Utretch following the War of Spanish Succession.

Another major motivation was trade, especially the fur trade. From the earliest years English merchants had invested in the possibility of profitable colonial trade, though success was limited. The turning point was the exploration and discovery of northern Canada as a source of premium fur. This led to the creation of The Governor and Company of Adventurers of England trading into Hudson's Bay in 1670. Through it, England laid claim to the massive Hudson drainage basin as Rupert's Land.

Unlike the dense agricultural settlements of Newfoundland, or the dispersed inland outposts of the French, the Hudson Bay Company was largely limited to tradeposts along the coast. It relied significantly on the native populations for conducting its fur trade.

Meanwhile, France was establishing its own North American colony, Nouvelle-France. 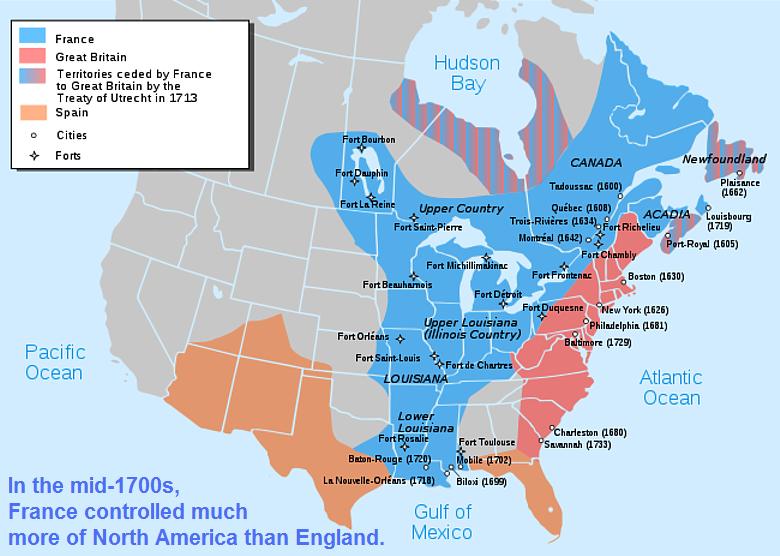 As has been noted by @TomAu, Britain and France were involved in numerous wars. A number of colonial possessions have already changed hands between the two sides, but a decisive moment came during the Seven Years' War, when British troops were able to successfully captured Quebec. In the subsequent Treaty of Paris, France ceded New France to Britain in exchange for Guadeloupe: Canada was expensive to maintain, while Guadeloupe was a lucrative colony thanks to its sugar.

For the British, the motivations were strategic. As the map illustrates, this linked up the disparate British colonies into one and excluded France from the neighbourhood. One of Britain's goals after the war was to make a lasting peace, and it was hoped that such a territorial arrangement would provide security to the colonies as well as remove a future flashpoint.

[The cessations] made our American empire compleat. No frontiers could be more distinctly defined, nor more perfectly secured.

For most of this time the British population was minimal. In the late 1850s and early 1860s, a number of gold finds occurred in the region. The sudden influx of American miners prompted the British government to formally organise and incorporate New Caledonia as the Crown Colony of British Columbia, and soon after formally assert British claims to the North-Western Territory. 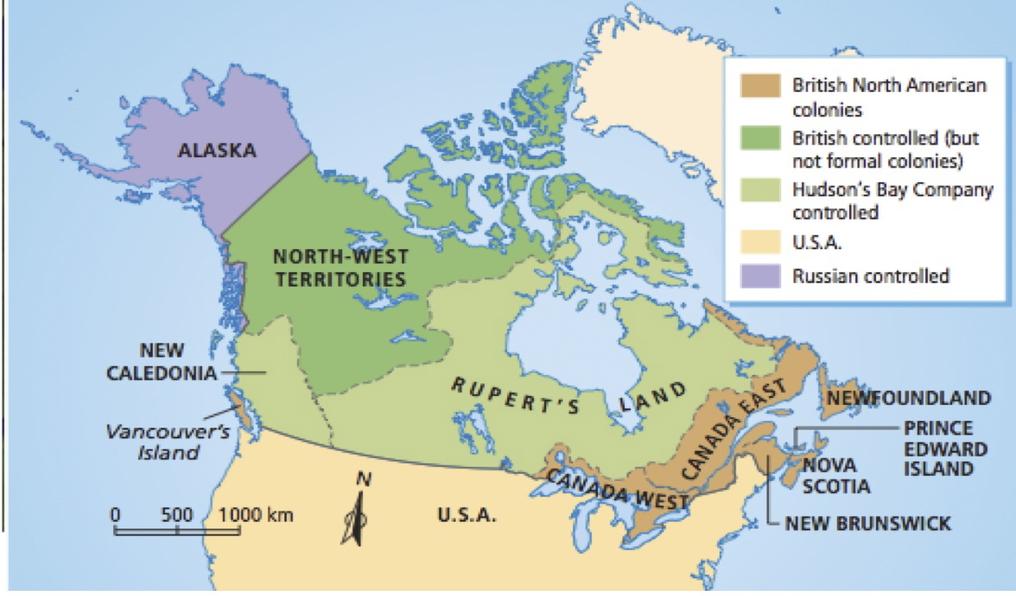 The British colonization of Canada happened almost by accident. It "started" with British settlements at Jamestown, Virginia in 1607, Plymouth, Massachusetts in 1621, and elsewhere in what later became the Thirteen Colonies. There were also British "maritime" colonies in the modern Newfoundland and Hudson Bay Valley.

The trigger for the colonization of the rest of Canada was the innumerable wars between Britain and France; War of Spanish succession (1690s), Queen Anne's War (1700s), War of Austrian succession (1740s), Seven Years' War (1750s).

As time went on, French possessions in Canada (and the Mississippi Valley) became more and more of a threat to the British colonies. The best way to quash that threat was to occupy those possessions, particularly Canada, which was connected to France by the Atlantic Ocean.

Canada is the country that extends from British North America. Far in advance of settlers, many explorers gradually unveiled the vastness of Canada, such as John Cabot (1497) and Jacques Cartier (1535).

By 1607, the British started settling at Virginia (the very first British colony), Plymouth, Massachusetts (in 1621) and what was to become known as the Thirteen Colonies.

Soon however, the British decided to colonise Canada due to innumerable wars between Britain and France; the war of Spanish succession (1690s), Queen Anne's War (1700s) and the war of Austrian succession (1740s). Since French possessions in Canada (and the Mississippi valley) became more and more of a threat to the British colonies, the best way to suppress that threat was to occupy those possessions.

Furthermore, the French were lodged in Quebec which was between the English lands, so it made more sense to invade them. The British achieved their aim with Seven Years' War (1750s), gaining the bulk of New France in North America.

After the Battle of Sainte-Foy (otherwise known as the Battle of Quebec), the French surrendered Montreal, marking one of the most important feats of the British North American History.

One may believe that Canada has little natural resources, but that idea is flawed. In Canada, the fur trade was lucrative enough for Britain to set up the Hudson's Bay Company and control Rupert's Land. Furthermore, Newfoundland had excellent fishing grounds and Canada was a vital source for timber. Europe had run out of tall trees that were essential for shipbuilding and Canada could provide some.

Another key reason as to why the British invaded parts of Canada is that there were large expanses of land and in an empire, the community needs a lot of land to grow and prosper. Of course, there are plenty of other reasons for a maritime proto-empire to build resupply stations on one of the oceans it is most vital for it to control.

This answer is based off comments and another answer. Special thanks to @TomAu , @MarkCWallace , @T.E.D. and @Semaphore for their help.

Not the answer you're looking for? Browse other questions tagged british-empire england united-kingdom canada colonization or ask your own question.

30
What were the reasons that the British colonies in North America rebelled but not others?
7
What was the ratio of French to English speakers in Upper Canada before and after the American Revolution?
4
What were the dominant Native American cultures in Eastern Canada and New England in the late 900s?
8
What percentage of the British Empire's economy was profits from the opium trade?
13
Was the British Empire bigger than the combined empires of the Iberian Union in terms of claimed land area?
21
Was the British Army a millionaire factory in the early 20th century?
15
In Britain, what was the “Junior Service” in 1913?
3
Why was it deemed necessary that the “average person… knows they are on the border”, which resulted in the creation of the US-Canadian border slash?
15
What happened to the British convicts transported to America after the American Revolution?