When was tofu invented? Was it specifically for vegetarian consumption from the beginning?

The Wikipedia page on tofu states that this food was first produced in Han dynasty China. However, the source cited seems to me quite doubtful:

The oldest evidence of tofu production is a Chinese mural incised on a stone slab. It shows a kitchen scene that proves that soymilk and tofu were being made in China during the period A.D. 25-220.

Endymion Wilkinson’s Chinese History: A Manual (rev. edition 2000) is a more reputable source. Here is what he states about the origins of tofu:

Bean curd (doufu) is first mentioned in the early Song [10-11th centuries AD]. It was imported into Japan and first appears there in a source of 1183. It was used as a substitute for meat and fish in the Buddhist vegetarian cooking. [pp. 642-3]

Elsewhere Wilkinson mentions that soybeans are indigenous to China and have been cultivated since the Zhou dynasty (so more than 2000 years ago.) The soy products from this earlier date are soy sauce and related fermented foods that have a strong, tangy taste, very different from the blandness of tofu.

Finally, a related question: Soy milk is now commonly consumed at breakfast along with fried doughnuts in China. When did this practice come about?

Tofu's origins are not conclusively known. The leading theory, however, is that it was invented during the Western Han Dynasty by Liu An, the king of Huai Nan. The earliest known reference to this is made in the Shiyi (a type of history book that is sort of an unofficial addendum to the official histories) written by a Liang Dynasty official, Xie Chuo (502-557).

Tofu creation is unheard of during the Three Dynasties (Hsia / Xia, Shang, Chou / Zhou). The making of this foodstuff became known to the world from the time of Han's Huai Nan King.

This is the most popular view in historical Chinese literature, including the authoritative Compendium of Materia Medica by Li Shih-Chen, (1518-1593)

The recipe for tofu began with the Han Huai Nan King Liu An. Black beans, soy beans, white beans, peanuts, snow peas, green beans and the like can be used. (...)

The evidence cited by wikipedia is a stone wall mural discovered in a Han dynasty tomb, which purportedly depicts the manufacturing process of tofu. 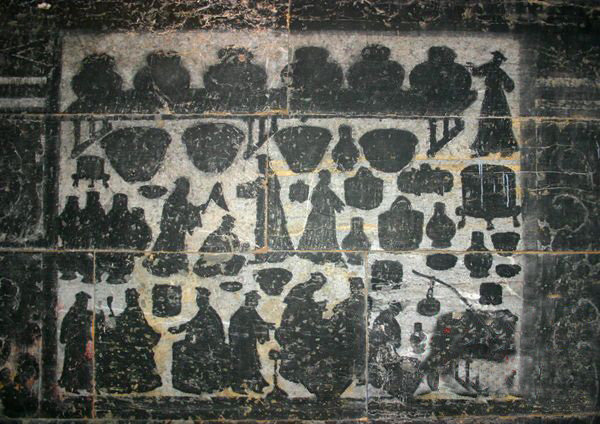 There is no true evidence of why or how tofu was invented. However a common tale is that the inventor's parents were old and unable to chew on soy beans properly. The inventor thus milled the beans into liquid, adding some medicine (plaster) into the mix, and inadvertently created a soft solid.

Another theory is that Liu An's monks came up with the idea, which if true would make it specifically invented for vegetarianism. There's no real evidence for this however.

The Wilkinson passage is probably sourced from the mention of Tofu in Qing Yi Lu, a miscellaneous book by Tao Ku (A.D. 903-970). While more accurately dating to the Five Dynasties (907-979), it is conventionally assigned to the corpus of Song Dynasty (960-1279) literature.

When Ji was the county official, he was honest and hardworking. He didn't eat meat, but bought several blocks of tofu each day. The city folks called tofu "the official's lamb".

Tofu was definitely known as an alternative to meat. Whether it was invented for vegetarianism is a lot more doubtful though. Meat was somewhat of a modest luxury anyway, so having a meat alternative doesn't necessarily say anything about being a vegetarian.

Not the answer you're looking for? Browse other questions tagged china food or ask your own question.

7
When was the restaurant "invented" in Europe?
10
Battle of Xiaoting: was Shu's invasion doomed from the start?
33
If the Ch’in dynasty was so short-lived, why was China named for it?
0
Was the sprouting of seeds for food production known in Europe before 1800?
7
When was natural gas first used for cooking food?
3
When was the potato introduced to Mexico?
10
How widespread was the consumption of rabbit meat by the poor in Medieval and Early-Modern Britain?