Where was the Buenos Aires - Lima Spanish Royal Road?

the Royal Road was a designation assigned to any road administered by the Spanish Crown, including through its viceroys. During the Spanish Empire, several such roads ran through the expanses of Central and South America (as well as California). A famous example is the 966km long * California Mission Trail* connecting Mission San Diego de Alcalá to Mission San Francisco Solano.

One of these roads connected Buenos Aires to Lima. What is the course of this route? Is there any map depicting its path? I couldn't find any image or map that covers the road nor basic information about it.

It seemed to follow the bright red path depicted in this image: 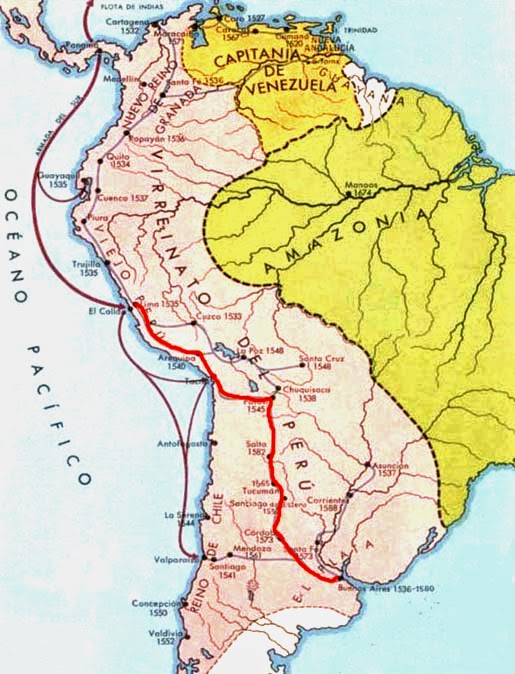 The Incan Empire had built and maintained a very extensive road transport system prior to their conquest by Spain. Segments of the old roads were converted into, and subsequently expanded upon, to form this particular El Camino Real.

Not the answer you're looking for? Browse other questions tagged transportation spanish-empire south-america argentina or ask your own question.

7
What is the oldest road in the world that has been in continuous use?
13
How come Incas believed that the Spanish were the incarnation of their “thunder god”?
27
How did the gold of the new world cause the Spanish Empire to collapse?
8
How was the Spanish Armada coordinated?
8
Why was Saturnino Martín Cerezo honored by the Spanish government?
3
Why wasn't Persepolis on Darius' royal road?