Where did the French revolutionists get their weapons?

They got their weapons from the Hôtel national des Invalides, which were stormed by a Parisian mob earlier the same day. Much of the armaments previously stored there had been removed just two days earlier, but the revolutionaries still managed to acquire ~28,000-32,000 (sources vary) muskets hidden in the cellars and the church. They also found several cannons in the courtyard.

[A mob of seven or eight thousand men] swarmed over the esplanade and took possession of twelve pieces of cannon, 24-, 18- and 10-pounders, and one mortar. The garrison, already infected with a "seditious spirit," made no defence, and the mob, spreading everywhere, soon found their way into the cellars and the church, where they discovered 32,000 muskets concealed, as well as a certain quantity of powder. These muskets and cannon were used the same day in the taking of the Bastille. As to the powder, on the previous day the people had already stopped thirty-six barrels which were being sent to Rouen; these had been carried off to the Hôtel de Ville, and all night long powder had been distributed to the people, who were arming themselves.

While the weapons were being slowly plundered, some of the mob headed for the Bastille San-Antonine. This was reputedly to acquire more gunpowder for their new equipment. While this group of revolutionaries were laying siege to the Bastille, they were joined by most of the Gardes Françaises. The mutineers notably brought with them artillery cannons (and presumably their own weapons).

After a brush with the 'Royal Germans' in the Champs Élysées, the crowd, always helped by the Gardes Françaises, plundered the 'Invalides' of 28,000 muskets, and then rushed to the famous Bastille (July 14) ... The arrival of the Gardes Françaises with their cannon finally dispirited the little garrison of 114 men, and they compelled Delaunay to surrender. 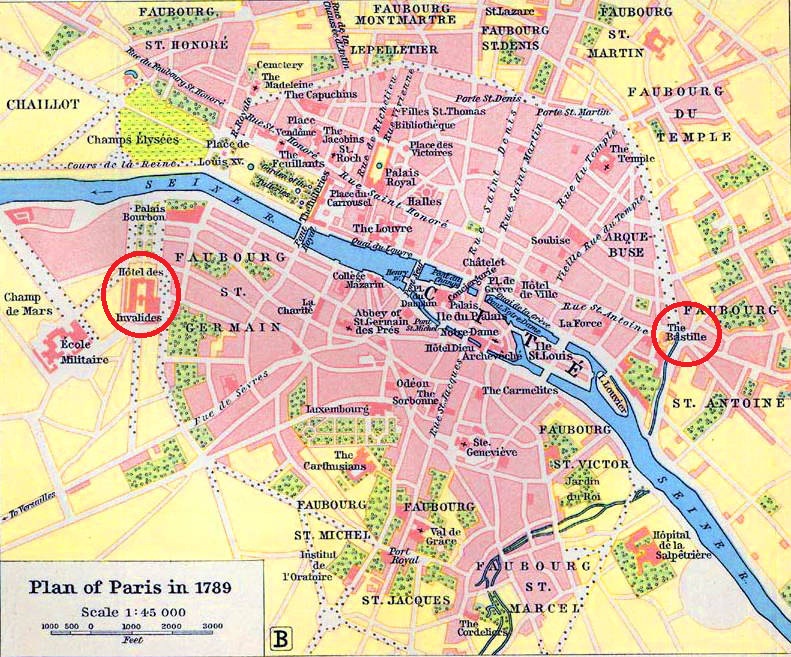 Not the answer you're looking for? Browse other questions tagged 18th-century weapons french-revolution or ask your own question.