How was Canadian sovereignty in the arctic threatened in the 1950s?

Wikipedia article on the settlement of Grise Fiord in the Canadian Arctic strongly suggests that Canada in the 1950s was striving to populate its arctic territory in response to challenges to its sovereignty.

I had always assumed Canadian control of everything between Greenland and Alaska was undisputed. In what ways were other nations or organisations seeking to undermine Canadian sovereignty in the area?

Your basic assumption that there is Canadian control of everything between Greenland and Alaska is more or less true. But there are a few existing problems of sovereignty between the two countries of Canada and Denmark (Greenland).

Grise Fiord, Nunavut is located at the southern tip of Ellesmere Island and Grise Fiord is only one of three permanent settlements on the island.

The problem lies in middle of the Kennedy Channel which is an Arctic sea passage between Greenland and Canada's most northerly island. Hans Island is a disputed island that is situated exactly half way between both nations. Things get a little complex when we read the following:

According to World Atlas, Hans Island is located in the middle of the 22-mile wide Nares Strait, which separates Greenland, an autonomous territory of Denmark, from Canada. Due to international law, all countries have the right to claim territory within 12 miles of their shore.

As such, Hans Island is technically located in both Danish and Canadian waters. World Atlas notes that the island was decided to be Danish territory by the Permanent Court of International Justice of the League of Nations in 1933.

However, as the League of Nations fell apart in the 1930s and was then replaced by the United Nations, the ruling on the status of Hans Island carries little to no weight.

The issue of Hans Island then loss traction in popular consciousness and the concerns of the Canadian and Danish governments throughout World War II and the heights of the Cold War, only to reemerge in 1984. - Two countries have been fighting over an uninhabited island by leaving each other bottles of alcohol for over three decades.

We can further see the complex nature of this issue:

After World War II, the League of Nations was replaced by the United Nations, and its PCIJ gave way to the International Court of Justice. Hans Island was mostly overlooked in the 1950s and '60s, and as time passed, rulings from the defunct PCIJ lost clout. When Denmark and Canada negotiated their maritime borders in 1973, they agreed on a wide range of territorial claims — but Hans Island wasn't one of them.

In 1984, Canadian troops made a fateful voyage to Hans Island. In addition to planting Canada's flag in the rock, they also left behind a bottle of Canadian whisky. Just one week later, a Danish official visited the island, replacing Canada's flag with Denmark's and replacing the whisky with a bottle of Danish brandy. He also upped the ante a bit, leaving a note that they were welcomed visitors to Denmark. - Canada, Denmark wage 'whisky war' on the rocks. 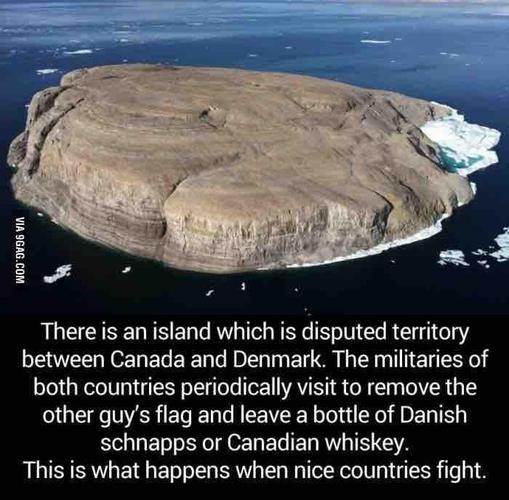 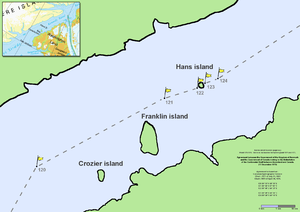 Not the answer you're looking for? Browse other questions tagged canada border-dispute arctic or ask your own question.

5
How did Nansen plan to get home from the Fram expedition?
6
Were discrepancies from the 45th parallel in the US-Canadian border ratified?
3
Did the Canadian Tuxedo emerge out of the Wool Shortage of 1973?
21
Were Arctic communities aware how different daylight cycles were elsewhere?
6
Was there any distinction between the 13 Colonies and the Canadian provinces prior to the American Revolution?
1
In World War 1, why were the Australian and Canadian troops so good?