In which places of the UK did the Vikings/Scandinavians have most frequent contact or colonies?

I was in York, England and there was a museum called Jorvik Viking Centre, which spoke about the Vikings who lived there. It said that the area back then was mostly populated by the Vikings. Since this place York, is not close to the coast, were there other areas in the UK which had large Viking or Scandinavian populations either visiting, raiding or colonising?

Primarily, in Eastern England and Western Scotland. In particular, what you might be looking for is the Danelaw. Technically, it refers to the parts of England (roughly one-third) where Scandinavian (Danish) laws applied. In geographic terms, this is a huge swathe of Northern and Eastern England conquered by invading Vikings during the 9th century. 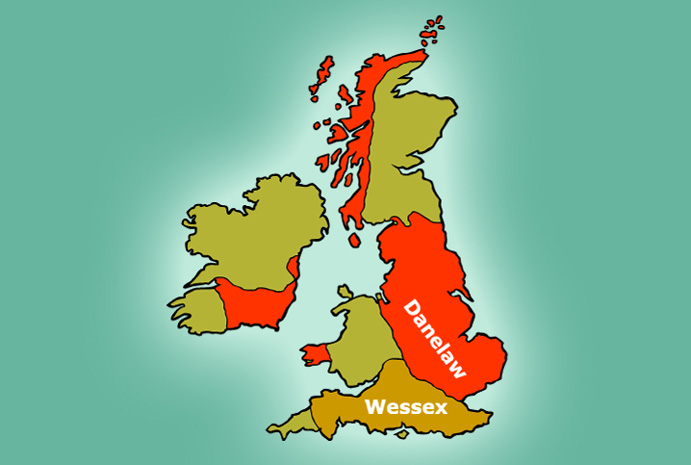 England had been raided by intermittent waves of Danes since about 800. The attacks peaked peaked with the Great Heathen Army of 865. First landing in East Anglia, the vikings invaded all four Anglo-Saxon kingdoms as they moved up and down Eastern England over the next decade. York was captured in 866 and became the Kingdom of Jorvik.

Thirteen years later during an invasion of the Kingdom of Wessex, the viking army was finally defeated by Alfred the Great. A peace was concluded in the aftermath. The Scandinavians kept control of much of what they had captured in Eastern and Northern England, and settled down in relative peace.

The Anglo-Saxons would gradually reconquer England during the early tenth century. Jorvik was annexed into the Kingdom of England by 954.

Of course, the Vikings had been ravaging all of the British Isles during this period, not just England. Around roughly the same time as the Danelaw's formation, other Vikings conquered Western Scotland and the islands of the North Channel, including the Isle of Man. Here they established the Kingdom of Mann and the Isles, which would persist until 1266.

In addition, the Vikings also captured the islands of Orkney and Shetland during the 9th century. These islands were ruled directly by the Kings of Norway, and was only taken by the Kingdom of Scotland until much later.

As a side note, a significant part of Ireland was also conquered and ruled by Vikings, including the comparatively long-lived Kingdom of Dublin. This isn't within the bounds of the modern United Kingdom, though.

Not the answer you're looking for? Browse other questions tagged england britain vikings scotland population or ask your own question.

18
Did Vikings use of water bowls in this unhygenic way?
25
Size of Viking armies and raiding parties in 9th-10th centuries?
12
Why are Vikings singled out for raids in Britain and Ireland when records may indicate most raids were by local rulers?
3
Why did Danish people not “connect” with neighbor nations until Viking Age?
18
How long did it take to get news of the sighting of the Spanish Armada from Land’s End to London?
8
In Scandinavia, was there a cultural continuity from Goths to Vikings or were they two different groups of people?
3
Where did poor London women give birth in the latter half of the 19th century?