How far were women able to advance in the Gestapo?

I'm trying to write a story happening during World War 2, and I'd like to include there a female Gestapo agent/interrogator as a main character. However, I've been searching and I can't find evidence that women had such an important job at Gestapo.

Did the Gestapo hire women as agents or interrogators? Did they have any opportunity to advance to top positions, or were they confined to middle/lower ranks?

Post #6 in this thread discusses the possibility of high female gestapo agents. Apparently there isn't any evidence for them. They did find this link which proves the existence of at least one female Gestapo, but it isn't clear what her rank was.

There is one brief mention of a woman being "very very high up in the Gestapo" in the book Frauen: German Women Recall the Third Reich. Unfortunately no specifics are mentioned and the text does not go into her role any deeper.

The book Täterinnen: Frauen im Nationalsozialismus about women's roles during the NS regime mostly confirms what other answers state. Even though the Gestapo had women working for them they were mostly secretaries. Usually those working for the Gestapo were not even employed as public officials ("Beamtinnen") which meant less authority for them.

It is however mentioned that during the war due to so many men being sent to the front a women were sometimes assigned jobs that were usually reserved for men. Again though the book doesn't go into much detail on that (at least from what is available on google books).

The book also briefly covers Carmen Maria Mory who was sent to Paris as a Gestapo agent. The allied later charged her (and sentenced her to death) for abuse of inmates, participating in "selections" (weeding out deportees, slave laborers and inmates that are not "arbeitsverwendungsfähig" i.e. not fit enough for slave labor and therfore to be killed) and killing women by lethal injection.

It is very unlikely such a thing existed. The Nazi cult assigned very specific roles to men and women. Working women in the Third Reich did exist and included not only secretaries, but even some combat roles. For example, it was found that women were much better AA gunners than men, so boom, they made every single AA gunner a woman. However, by the same token, roles that were designated to men, such as secret police, were invariably men.

Women did act occasionally as spies, so you might be better off making her a spy of some kind, temporarily thrust into the role of interrogator. That would be more realistic.

Depending on the time frame, no one questions the SS.

As the Nazi Party monopolized political power in Germany, key government functions such as law enforcement were absorbed by the [Schutzstaffel], while many SS organizations became de facto government agencies. To maintain the political power and security of the Nazi party (and later the nation), the SS established and ran the SD (Security service) and took over the administration of Gestapo (Secret state police), Kripo (criminal investigative police), and the Orpo (regular uniformed police). Moreover, legal jurisdiction over the SS and its members was taken away from the civilian courts and given to courts run by the SS itself. These actions effectively put the SS above the law.

Female guards in Nazi concentration camps were collectively known as SS-Helferin, "Female SS Helper". The Nazis began conscripting women because of a guard shortage, however they were never given any positional titles or equivalent ranks of the SS. The German title for this position, Aufseherin means female overseer or attendant. Heinrich Himmler himself had told the SS men to regard the female guards as equals and comrades. -Wiki

I would assume, unofficial or not; lady comes in with SS on her arm, nubs (regular army) click their heels. 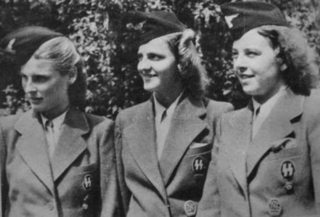 Not the answer you're looking for? Browse other questions tagged world-war-two nazi-germany women or ask your own question.

14
To what degree did women participate in the air war during WW2?
8
Were dissident KPD members ratted out to the Gestapo?
42
Why were women targeted as witches?
113
Were there women who were against giving women the right to vote?
5
Why would native women of the Russian Far East undergo Orthodox baptism?
8
What were women doing at the Battle of Dorylaeum during the First Crusade?
5
Were women in 17th century France as cloistered as suggested here?