What toilet facilities were available at large formal gatherings in 19th century America?

I have seen many woodcuts and engravings of large groups of 19th century partygoers dressed in their finery enjoying themselves at parties or balls.

Sooner or later in any gathering, nature calls. What toilet facilities were typically available to handle the needs of attendees, especially women garbed in yards and yards of expensive cloth? Were attendants present to help the ladies? How was cleansing handled? Was hand-washing practiced?

I think this will differ significantly based on the details of the location, attendees, event, decade, and so forth. Generally, speaking, there were a few ways people would eliminate their waste at this time. Wikipedia has a decent précis on the subject.

The cesspit or outhouse - the most common system in all human history, other than just going in the woods. You use a hole the ground, which could take many forms and sizes, and some sort of seat inside a small room. Often the pit would be emptied by special workers who shoveled the waste out to be used as fertilizer. The benefit for parties is that you could dig a bigger hole and add more seats, so it scales okay, provided you have the ground space for a giant smelly pit. In European castles, they often had special closets with seats over shafts that dropped down to a pit or a body of water. The outhouse method was still common in the rural US well into the 20th century.

A slightly different take on the cesspit is a public urinal, which often was little more than a dedicated (sacrificed?) wall and a partial modesty shade. Obviously this only works for men, but it was thought to decrease the risk of such behavior being down randomly in the street or directly on the side of buildings. They were very popular in Europe and still exist today; Wikipedia has a number of delightful pictures. 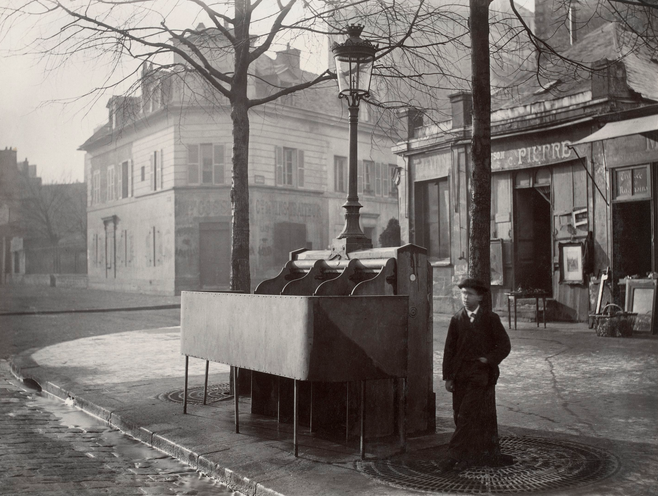 The chamber pot - very common in many situations, and especially in finer houses. Basically, you use it generally by placing the pot under a dedicated seat with a hole. You might use it in your bedroom, or in a special closet, or just wherever you were at the time. For wealthier homes in the 17th and 18th centuries, the servants would empty the pots in a dedicated location inside the house to and wash the pot. The chamber pot doesn't work as well for very large gatherings, since it requires a place to empty it all - and at a fancy gathering, servants to empty for each use. 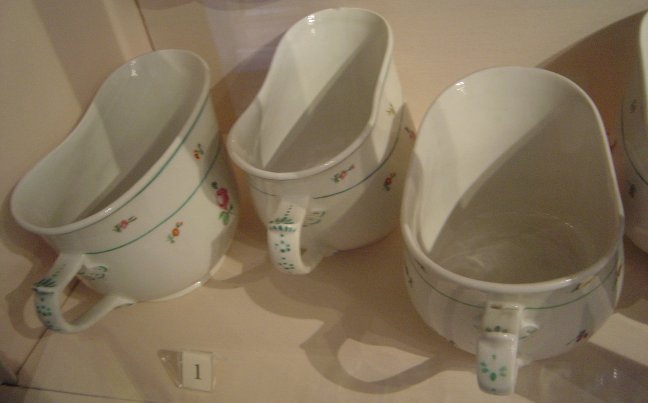 Dry earth toilet - basically a human litter box. A contraption drops sand on your waste to block the smell and disease prior to tossing it out. Not invented until the mid-19th century, after the water flush toilet, but was cheaper and didn't require water for flushing.

Flushing water toilet - for wealthier people prior to the 20th century. The invention is old, and got more practical with various developments that made it more functional and economic. But it was still relatively uncommon for many people until the 19th century. It was quite the rage in the mid-19th century in London, which had an expanded sewer system. In fact, public flush toilets became an attraction in 1851 at the Crystal Palace:

At The Great Exhibition at Hyde Park held from 1 May to 15 October 1851, George Jennings installed his Monkey Closets in the Retiring Rooms of The Crystal Palace. These were the first public toilets, and they caused great excitement. During the exhibition, 827,280 visitors paid one penny to use them; for the penny they got a clean seat, a towel, a comb and a shoe shine. "To spend a penny" became a euphemism (now archaic) for going to the toilet.

When the exhibition finished and moved to Sydenham, the toilets were to be closed down. However, Jennings persuaded the organisers to keep them open, and the toilet went on to earn over £1000 a year.

However, these were primarily found only in England until the late 19th century. In the US, the late 19th and early 20th centuries were the period of the widespread adoption of flushing toilets. Prior to that, the most likely route would have been something similar to a chamber pot, or else an outhouse.

Not the answer you're looking for? Browse other questions tagged 19th-century social-history or ask your own question.