What machine technology did the Egyptians have to build the great pyramids?

Reading the "Account of Egypt" by Herodotus, it says of the great pyramid of "Cheops" (Macauley translation):

This pyramid was made after the manner of steps which some called "rows" and others "bases": and when they had first made it thus, they raised the remaining stones with machines made of short pieces of timber, raising them first from the ground to the first stage of the steps, and when the stone got up to this it was placed upon another machine standing on the first stage, and so from this it was drawn to the second upon another machine; for as many as were the courses of the steps, so many machines there were also, or perhaps they transferred one and the same machine, made so as easily to be carried, to each stage successively, in order that they might take up the stones; for let it be told in both ways, according as it is reported.

This may just be a Greek or late Egyptian technology being anachronistically supposed to have been used in the past, but nevertheless, it is interesting to ponder what kind of machines the Egyptians could have had that fit this description. Some of the larger stones in the pyramid weight 10 metric tonnes, so the machines would have to have that capacity.

The only machines I have found depicted in ancient Egyptian wall reliefs and paintings have been chariots and balances. I have not been able to find any examples of cranes.

One book I found is called "Ancient Egyptian Construction and Architecture" by Somers and Engelbach (1930) which seems to describe some of their technology for construction. Another book is "Ancient Egyptian Materials and Technology" by Nicholson and Shaw.

Well the answer is they didn't. The pyramids were built by pulling blocks up on ramps. 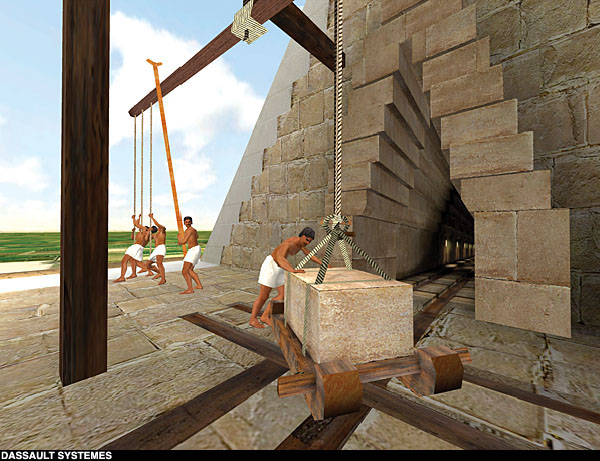 Herodotus's machine did exist according to painting but it was probably not used to build the pyramids like he said. But it was used for getting water out of the nile river.

The second theory centers on Herodotus's machines. Until recently Egyptian farmers used a wooden, cranelike device called a shadouf to raise water from the Nile for irrigation. This device can be seen in ancient tomb paintings, so we know it was available to the pyramid builders. The idea is that hundreds of these cranes at various levels on the pyramid were used to lift the blocks. One problem with this theory is that it would involve a tremendous amount of timber and Egypt simply didn't have forests to provide the wood. Importing so much lumber would have been impractical. Large timbers for shipbuilding were imported from Lebanon, but this was a very expensive enterprise.

Perhaps an even more fatal flaw to the crane theory is that there is nowhere to place all these cranes. The pyramid blocks tend to decrease in size higher up the Great Pyramid. I climbed it dozens of times in the 1970s and '80s, when it was permitted, and toward the top, the blocks sometimes provide only 18 inches of standing room, certainly not enough space for cranes large enough to lift heavy blocks of stone. The crane theory can't explain how the blocks of the Great Pyramid were raised. So how was it done?

What about the 5 levels above the King's Chamber that consist of rows of 70-plus-ton granite slabs? No amount of human labor can drag that weight up that steep of an incline. Furthermore, what were these ramps proposed to have been made out of? And where are they? Sand would collapse under the weight, and as was noted, timber wouldn't have been used. Are you going to tell me they made them out of the blocks themselves? And then removed all of them once they were done?? Ludicrous. No, I'm afraid the answer is NOT that they were constructed via ramps, and that this is still an open mystery.

Not the answer you're looking for? Browse other questions tagged technology egypt pyramids or ask your own question.

20
What kind of labor was used to build the Egyptian pyramids?
0
Did the British and the French build the Suez Canal?
4
Why did email use develop in tandem with the internet, rather than other technologies?
15
Did the Ptolemaic Egyptians know how old the Pyramids were?
10
Are the pyramids too old?
15
When did the Egyptians stop wrapping their dead in bandages?
2
Did people in the late 1800s and earlier really think that there would be, or already exist, “mechanical men”?
47
Why did the Germans use the Enigma machine rather than the far superior “Lorenz” cipher machine?