Nomination of candidates in 1824 election

The traditional method of nominating candidates before 1824 in America was "King Caucus", informal congressional caucus. For the 1824 election, William Crawford was nominated by Caucus and four other candidates (three of which stayed in the race) were nominated by other means. By exactly what means were they nominated? More generally, what is the procedure for determining who is on the presidential ballot? Is there some office that the list is submitted to or some committee that puts their stamp on it or what?

Note that the first Congressional nominating caucus was in 1796, and was only to select a VP nominee. Thus the "King Caucus" system really only operated for POTUS candidates for 6 election cycles (1800-1820).

In the USA, the presidential election is essentially a set of separate elections where every state simultaneously votes for its state's choice of presidential electors. As such, the responsibility for drawing up and printing a state's ballot is entirely up to that state. A state could in theory, if it felt like it, refuse to put a major party's candidate on the ballot. Before the Civil War (particularly prior to 1836), it was actually relatively common for states to appoint their electors with no popular vote whatsoever.

In current practice, states delegate this task to their own state election boards, which have specific rules that have to be followed (as per that state's laws). For instance, in my own state of Oklahoma, parties get to pick their nominees, but a party only gets a line on the ballot if it received 10% of the vote in the last major election. This makes Oklahoma one of the toughest states in the country to get on the ballot.

1836 is an interesting case, in that the Whig party tried nominating different candidates in different regions of the country. The hope was that this would thwart a popular Democratic-Republican candidate by deadlocking the Electoral College and throwing the election into the House, where they had a majority. It didn't work, and hasn't been tried since.

. . . . The election of 1824 brought an end to both the Democratic-Republican-dominated “era of good feeling” and the use of a congressional caucus as a nominating device. Although the Democratic- Republican caucus nominated William Crawford of Georgia as its candidate, three other candidates (John Quincy Adams, Henry Clay, and Andrew Jackson) were also nominated by rival factions within the party. After a bitter contest and an electoral college deadlock, Adams was elected President by the House of Representatives. Senate Reference Paper

Today the political parties nominate candidates; in the early days of the Republic nominations arose from caucus'. The election of 1824, in which the party nominated multiple candidates and as a consequence lost the election, shaped the current system.

I can't find a clear reference, but the ballots are printed by state board of elections, generally under the supervision of the State's Secretary of State. Candidates qualify by submitting a nomination petition.

There was no official "procedure for determining who was on the presidential ballot" because during this period there were no official ballots.

In most states, voters were required to write the name of their preferred candidates on scraps of paper, but this was problematic because it required people to remember a large list of names, and votes were often disqualified because of misspelled names.

To help voters, the parties supplied their own ballots with only their party's candidates printed on them. You could copy names from the ballot onto a scrap of paper, or in some states you'd simply place the printed party ticket into a ballot box. Here's an example of one such ballot (source): 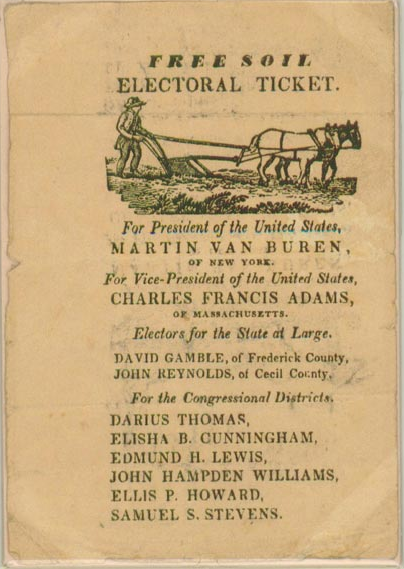 How Did Parties Choose Which Names Went on their Ballots?

There was never anything official or binding about nominations stemming from the Congressional Caucus. State parties were always free to ignore the Caucus and print their own ballots with their own presidential candidate.

Again, because of the unofficial nature of nominations, any group dissatisfied with the state party's nominees could simply print their own ballots. This is what happened in 1828: The Jacksonians did not need to worry about "getting on the ballot," because they could distribute ballots with Jackson's name to potential supporters.

Not the answer you're looking for? Browse other questions tagged united-states 19th-century political-history election political-party or ask your own question.

7
What led to election violence in Kenya in 2007?
6
What was done to prevent electoral fraud in Texas following the controversial 1948 election?
18
Why did Stephen Ambrose believe that the election of Aaron Burr would have led to the end of the USA?
12
Has there ever been a US election that flipped as many state seats as the 2010 midterm elections?
9
Why was Truman considered a heavy underdog in the 1948 election?
4
In the 19th century, what brought on a general election in the United Kingdom?
8
In the election of 1800, why did Burr end up with as many electoral votes as Jefferson, rather than one fewer?
5
Who conducted the first "straw poll" in U.S. election politics, and when was it conducted?
3
When else has an incumbent president alleged election fraud by a challenger?