Did JFK really say “Hitler is one of the greatest men…one of the most significant figures that ever lived”? [closed]

Hitler is one of the greatest men, the old trust him, the young idolize him. It is the worship of a national hero who has served his country.…Within a few years, Adolf Hitler will emerge from the hatred which surrounds him as one of the most significant figures that ever lived.

If so, when and where did he say this? 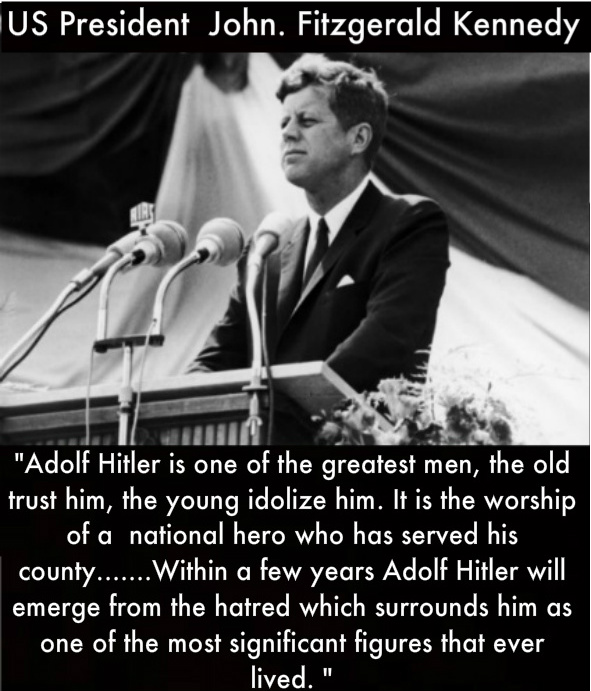 You are possibly referring to this:

After visiting these two places you can easily see how that within a few years Hitler will emerge from the hatred that surrounds him now as one of the most significant figures who ever lived. He had boundless ambition for his country, which rendered him a menace to the peace of the world, but he had a mystery about him in the way that he lived and in the manner of his death that will live and grow after him. He had in him the stuff of which legends are made.

This is from Prelude to Leadership (The Post-War diary of John F. Kennedy). See page 73 to 74.

But what you quoted is mixed with this:

As to his popularity, especially among the youth of Germany, there can be no manner of doubt. The old trust him; the young idolise him. It is not the admiration accorded to a popular Leader. It is the worship of a national hero who has saved his country from utter despondency and degradation.

Not the answer you're looking for? Browse other questions tagged hitler quotes john-f-kennedy or ask your own question.

9
Did Theodore Roosevelt ever say the “things that will destroy America” quote?
29
What was Hitler like in private?
10
Did Goebbels really say “Truth is the enemy of the state”? If so, when?
13
Did Hitler really keep the blueprints of the current Nebraska state Capitol building in the drawer of his desk?
13
Did Diderot say “Men will never be free until the last king is strangled with the entrails of the last priest”?
7
Did Hitler brag about or downplay his war experiences in WW I in appealing to 1932 voters?
12
Did the Nazis identify as being Fascists? How exactly did they view themselves?
105
Did Adolf Hitler ever address the fact that his own appearance was almost an exact opposite of what he considered the ideal Aryan appearance?
8
How long did Adolf Hitler serve on the front lines as an infantryman in WWI before becoming a courier?