What was the average height in Classical Greece?

This is a follow-up for Average height of Ancient Roman Men and Women? :

I'm curious what was the average height and build of men & women citizens of Greek states (Athens, Sparta, etc) in 7th-3rd centuries BC as well as civilizations they interacted with (Persians, Egyptians).

In particular, were there height and build differences between the above states/peoples statistically significant in comparison with height and build variations within individual state/people?

In 1944-45, the late forensic anthropologist John Lawrence Angel studied Ancient Greek skeletal remains. His results were 162 cm for men and 153 cm for women. He only had a rather small sample size at the time, though.

Right after his death, excavation began on the cemetery of the Magna Graecia colony-city of Metapontum. The Metaontum necropolis was remarkably well preserved, and an examine of the excavated remains vindicated Dr. Angel's earlier results.

The Metapontion necropolis ... revealed that the average height of adult males was between 162 and 165 cm, that of females between 153 and 156 cm, and with a body weight of approximately 60-65 kg for males and 50-55 kg for females; in other words, the findings of earlier examinations were soundly confirmed in this respect. 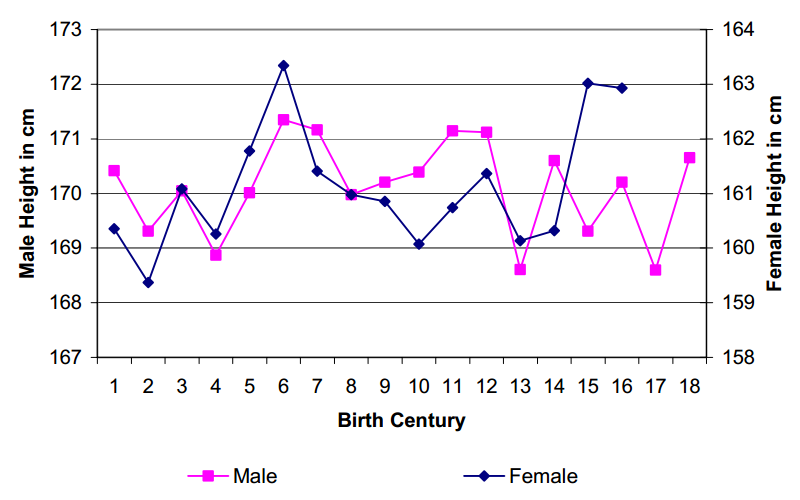 - Koepke, Nikola, and Joerg Baten. 2005. “The Biological Standard of Living in Europe during the Last Two Millennia.” European Review of Economic History 9(1): 61–95.

Not the answer you're looking for? Browse other questions tagged ancient-greece ancient-egypt classical-antiquity persia anthropology or ask your own question.

28
What was the average height of Roman men and women?

8
What was the origin of the Classical Antiquity culture?
28
What was the average height of Roman men and women?
13
What did the letter theta symbolize in ancient Greece?
4
What was the average weather during the times of the Ancient Greeks?
9
Was classical Alexandria really this brutal and class-segregated?
0
Was Greece the only thing stopping a Persian invasion of Europe?
23
What prevented slaves in Classical Greece from running off?
13
What did the ancient Eastern world think of the ancient Greeks?
2
Was there a continuity in architecture from the Minoan civilisation to classical Greece?
16
How exactly were beer/bread made in Ancient Egypt?