What is this strange symbol painted on basement floor?

Given the layers of dirt this symbol and the walkway were found under, I assume it was painted before the 1960s. The house was likely built between 1900-1913, with the basement being dug at the same time. But the concrete used for the floor in each room of the two-room basement is different, with the backroom where the symbol was found having more layers of dirt and what appears to be an older style of concrete. As shown in the illustrations, there is a trapdoor to the basement. At the bottom of the stairs under the dirt a painted path was found (red and green colors as indicated) which led to the back room of the basement. 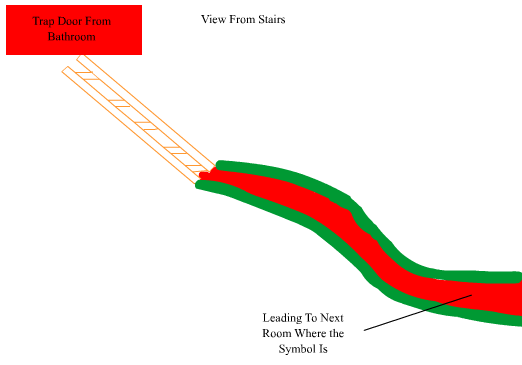 The path ends at the doorway to the back room, and does not connect directly to the symbol although it shares the same colors. 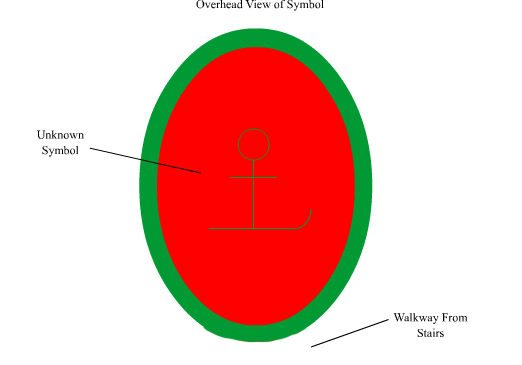 I did trace the history of the home and did not find any notable family names that could have given easy clues as to the origin of the symbol. The house is one of eight roughly identical one-story brick homes on the block, all built at the same time with similar basements, but winding up with different layouts and materials today. This house was the only one with the symbol. None of the other houses use a trapdoor for internal basement access, but they do have the stairs in a similar location. 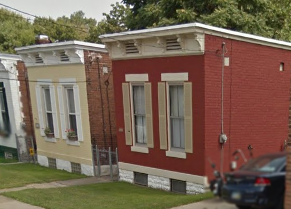 The house is located in the Austinburg neighborhood of Covington, Kentucky. 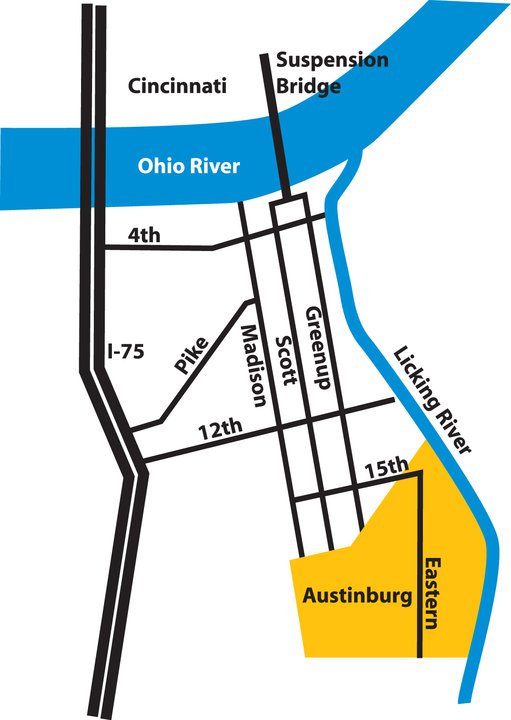 I can provide additional neighborhood history information if you think it would help. I've run this online in the past and have gotten a number of suggestions, usually focusing on a venus symbol or a half anchor. I'm curious whether anyone here can identify the symbol with a credible source.

I'm surprised I'm the first to suggest this, and this is probably a bit of a stretch, but with Covington being right on the border between slave and free states, could this have marked a stop on the underground railroad? I know the construction date of the building was stated as 1900-ish so would be too new, but it mentions the concrete in the back basement as "older" so I speculate maybe this connected to an underground chamber of some earlier building?

Passage of the 1850 Fugitive Slave Act only increased the number of slaves who not only escaped from and through Kentucky, but also continued their journey on to Canada. Several slave narratives document escapes by slaves from other Northern Kentucky communities who passed through the Covington or Newport stations on their way to Canada. -- Kentucky and the Underground Railroad

The so-called "Symbol" looks to me like a map of the Ohio river crossing. Look again at your map and note how you've drawn the river as hooking upward on the right, just as the bottom of the symbol hooks up on the right. Could this symbol really be a crude map showing how to cross the river to an area of safety? At the time, there would have been no bridges, but the vertical line might indicate a path to safety from the ferry drop-off point, across a major road to the next station on the railroad. 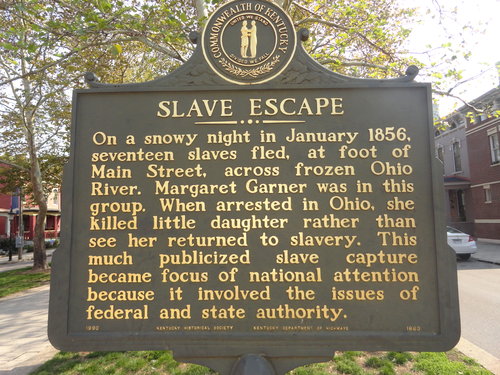 I imagine there are land records indicating who owned this property in the 1840-1860 period, and whether there were buildings on this site; if not that would disprove this theory. Also, I'm not sure whether it was common practice to lay concrete floors in basements in that time period - they may have just been dirt floors typically; if that's true this also would blow a hole in my theory. 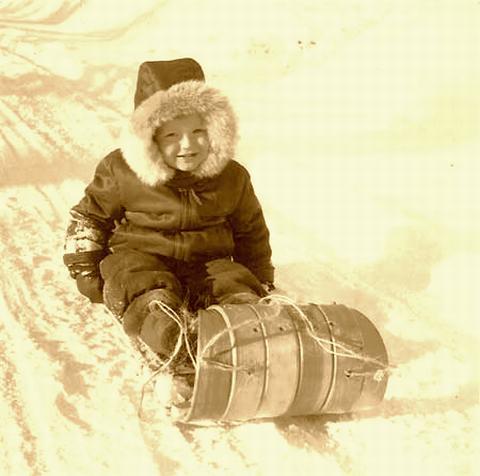 The game consists in "slidding down the stairs following the colored path to the exact spot with the icon".

Unknown Symbol is a kid on a toboggan.

CRSouser had the right basic idea that it is a variant on an Ankh.

The symbol is almost certainly from the Theosophy movement. The basic emblem of this movement is a stick figure ankh inside of a pentagram. Sometimes this was abbreviated as just a circle with a stem and cross bar. The significance of the lower, ski-shaped crossbar I can't say, but given the time period and nature of the symbol it is highly likely there were Theosophical meetings in the house.

Not the answer you're looking for? Browse other questions tagged united-states contemporary-history identification or ask your own question.

12
Strange symbol on Midwest brick home
1
What is the history of this coin? By Mandate of Heaven) Emperor of the Great Qin", Nurhaci - 1616-1626
2
What is the story of this image?
2
How well did King Harald V of Norway know FDR's dog Fala?
5
What is this USA membership pin?
3
What kind of knife is this?
30
What is the object moving across the ceiling in this stock footage?
35
What is this symbol in a financial record from Wisconsin, USA, in 1860?
4
Can you help identify this European military uniform and medals?