What sources or documentation exists to indicate Stalin's level of popularity in Russia today?

To what extent is Stalin still loved and/or respected by Russians (and for extra points former USSR states)?

indicate there is a large proportion of the populace who still respect (if not actively adore) Stalin, this article (in Russian) indicates the voting was tampered with.

Are there any other studies that indicate weak or strong support for Stalin?

I think Stalin is quite popular in Russia. It would be quite surprising if Stalin was not that popular. The popularity of Stalin today may be even greater than it was in 1970s and 1980s. There are multiple reasons.

It should be noted that Stalin is often praised not only by Communists but also by various nationalists and monarchists who perceive Stalin as a kind of strong and just "Tsar". The monarchists for example, frequently believe that Stalin was in fact Orthodox Cristian and sought to protect the church. This is based on the fact of the war-time reconciliation with the church by the Stalin's government to appeal to the patriotic feelings o the population. They also sometimes praise Stalin for purging the leadership of the party of Jews who are considered unpatriotic and anti-Russian. They often oppose him to revolutionary destructors, which they allege were at power before him.

It should be also noted that the popularity of Stalin rose considerably in post-Soviet years compared to that of the late USSR along with popular anti-Americanism due to evident crude influence of the USA and the West in Russian politics that detrimented the wealth of the people and strength of the state.

In this video a Russian philosopher and politologist Alexander Dugin explains his point of view on the reasons of popularity of Stalin: http://www.youtube.com/watch?v=URDsT6HXRhQ . In short his point of view is that Stalin is an image, archetype of a father of nation that is imbeeded in Russian mentality irrespective of what actually was historical Stalin and that this archetype is a constant to Russia. He claims that the people want a leader under which the elites will suffer and fear, and Stalin is exactly such leader. He also claims that the popularity of Stalin rises due to comparison with modern leaders.

P.S. I missed to mention two more serious reasons why Stalin may be popular today based on modern politics.

Pretty much everyone in Russia knows Stalin because history is a mandatory subject in school, and it is being taught from 5th grade all the way up through the 11th.

There are many reasons for him still being known in the country.

To sum up, Stalin's popularity is due to the fact that no actions of the current leaders are even close to compare with Stalin's measures to make the population happy.

Fortunately, there has been some scientific polling done on this topic, which is much more reliable than the TV poll where Stalin was voted the third-best Russian. Stalin still commands considerable respect in Russia and the Caucasus states, but attitudes vary greatly with the framing of the question.

In 2012, the Carnegie Endowment and Levada Center polled Russian, Azerbaijanis, Armenians, and Georgians about Stalin. This study reveals that by far, Stalin is most admired for his role in WWII: 60% of Russians, 69% of Armenians, 72% of Azerbaijanis, and 76% of Georgians agree that "For all Stalin's mistakes and misdeeds, the most important thing is that under his leadership the Soviet people won the Great Patriotic War."

The two-mindedness of attitudes toward Stalin is on display in the following graph, which shows that pluralities in all four nations simultaneously view him as "a wise leader" and "a cruel, inhuman tyrant." 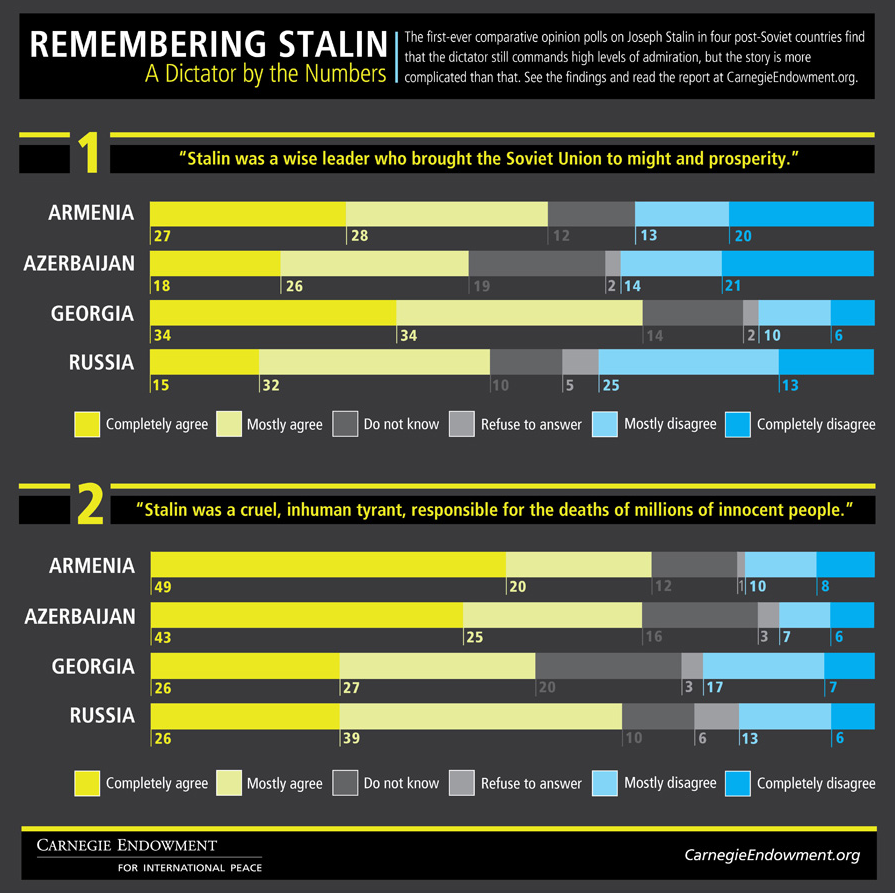 But lest we think that citizens of former Soviet nations are actually pining for Stalin, only 15% of Azerbaijanis, 18% of Russians, 22% of Armenians, and 24% of Georgians would "like to live in a country ruled by a person like Stalin." The study also finds that younger generations have "a growing indifference to Stalin."

Unsurprisingly, Georgians consistently have a better view of the most notorious Georgian than do the three other nations.

Sources: The first two polls can be found at the Polling the Nations repository. The full Carnegie Endowment study can be found here. There's a lot more in it; it's worth checking out.

Not the answer you're looking for? Browse other questions tagged 20th-century soviet-union russia communism post-communist-era or ask your own question.

23
Were there any attempts to assassinate Joseph Stalin?