Did the division between East and West Germany coincide with cultural boundaries?

Prior to the division, was there any major cultural difference between eastern Germany and western Germany which made the eastern side more inclined toward or tolerant of the Soviet Union, communism, and totalitarianism?

Another way of asking the question: In 1989, we found a modernized, industrialized, and economically vibrant West Germany, and a East Germany impoverished, decaying, and paranoid under the Stasi. Was this due entirely to the two different systems which were imposed upon them, or was there some innate difference between the eastern and western culture?

The main historical cultural boundary within Germany has been for centuries between the parts that used to be occupied by the Romans, and the parts that weren't. Which roughly translates to a North/South boundary, rather than East/West. BTW, in this context, Austria should be considered part of Germany's south; it is a separate country only due to a historic accident. This boundary was frequently reinforced by wars, and the resulting enmities, such as the war between Prussia and Bavaria that still kindles resentments between these two regions.

That division is still reflected in many parts of the culture. For instance, all the major wine-growing regions are in formerly Roman-occupied territories (of course, climate also plays a role here). Germans have the term "Weisswurstequator" - a (supposed) line, south of which people eat Weisswurst (white sausage). Generally, food, dialects, traditions, religion and a lot of other aspects of life were shaped by this divide.

The East/West divide really only affected the northern German cultural area to begin with, and in a surprisingly short time did create a new cultural divide that, as far as I can tell, seems to persist (although I don't live there any more).

Finally, the question about why the West prospered and the East impoverished. To some extent, some of the underlying assumptions may not be true. Of course the West ended up wealthier than the East, but East Germany was actually fairly economically successful in its own right; it was said to be the wealthiest of the Soviet Bloc countries. And the West wasn't uniformly wealthy, either - most of the economic success was concentrated in the South, while northern West Germany was comparatively poor (not poor in absolute terms, of course, just relative to the south)

Another big factor that makes this an apples/oranges comparison is the Marshall Plan, and generally the fact that the West was embedded in a very prosperous North-Atlantic alliance, while the East was trapped in a failing alliance.

And, yes, of course the different economic systems did make a difference, too.

The existing answers & comments seem to me roughly accurate. Yes, the division of Germany was approximately where American and Soviet forces met. But the border had been agreed some time beforehand and, indeed, the Americans had to withdraw from about one third of East Germany which they occupied at the very end.

So how arbitrary was the dividing line and how much did it cut across existing cultural/political borders? I thought some maps would be helpful, and when I couldn't find what I was looking for I decided to make some. In doing so I found the dividing line was cleaner then I had expected, in terms of respecting existing German political boundaries. So this may help to answer your question.

First, I wondered about the pre-Nazi German states and whether the dividing line respected or cut across them.

Here's a map of the old Weimar area Germany, with individual states in separate colours. I've superimposed the 1945 border. You can see that where possible, the division didn't cut across existing states: 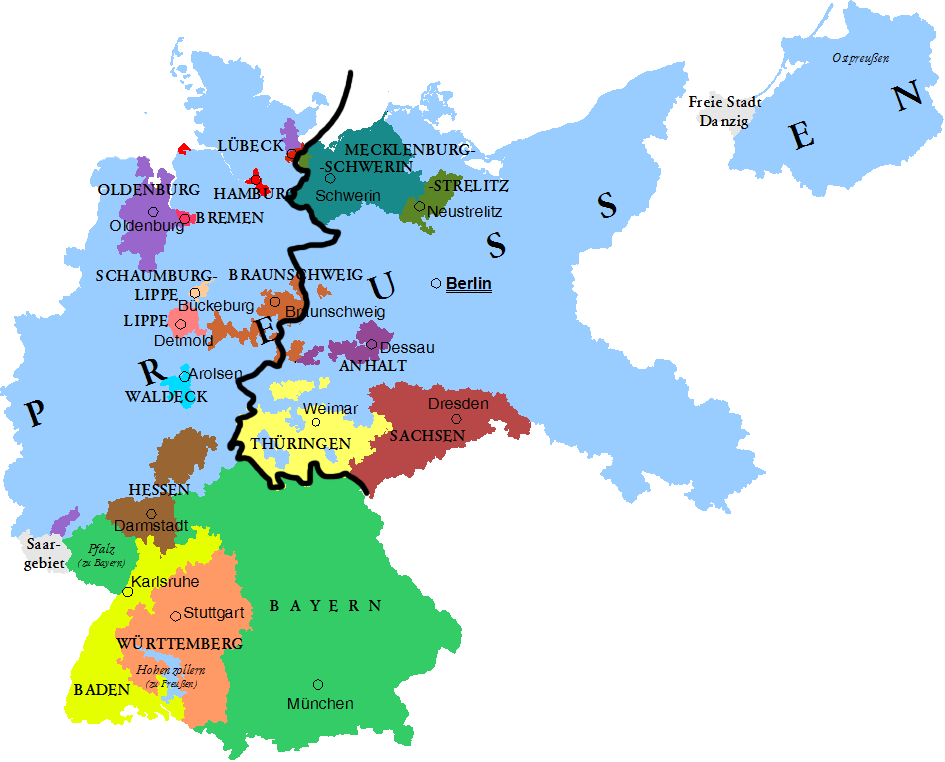 But Nazi Germany remade the internal political makeup of Germany, organising the country into separate gaue. Again, I wanted to find a map of these gaue and check the dividing line imposed by the Allies. Again I superimposed the 1945 border and found German existing political boundaries were respected: 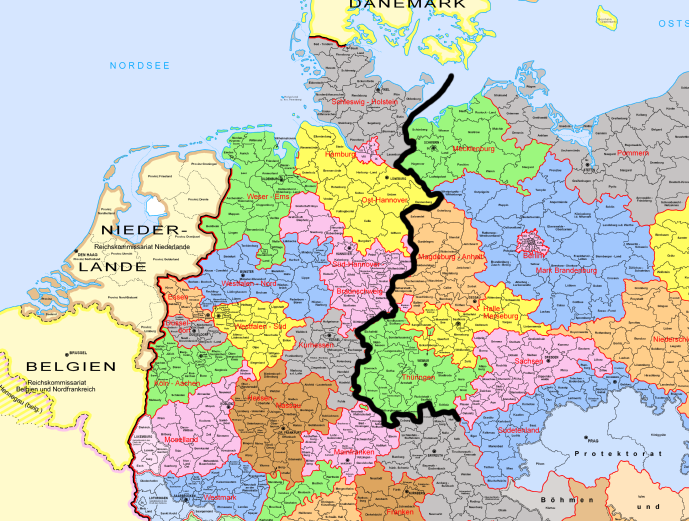 As to whether eastern parts of Germany were more backward anyway, and innately more pro-communist, then straightforwardly the answer would be no. I'm reminded of the quote, sorry I can't find the source, about communism being so terrible a system even the Germans can't make a success of it.

If you follow the link Gesamtergebnisse der Wahlen zum Reichstag und Mandatsverteilung you find maps with the results of the elections of the Weimar Republic.

The map for the KPD (communists) shows a strong area in the east of the later GDR.

There is no big effect for the SPD (socialists)

Looking at the maps, there is a bigger North-South difference then a East-west-difference. This is similar to my subjective impression as a German. (I'm from South-West Germany and I feel more in common with somebody from Thuringia (South of the former GDR) then with somebody from Hamburg.

Interesting side information: The NSDAP had there biggest success in the very east of Germany (what became part of the USSR and Poland).

A line was drawn on a map during a conference between Stalin, Roosevelt, and Churchill. That line was intended to divide Germany into pieces according to a division of power the three had agreed upon.
The line was drawn to follow some natural boundaries like rivers and lakes, and that's about it.
Not culture, politics. And not even German politics.

All people are different, but more similar to their close neighbors than the more distant ones (statistically). Of course there are geographic differences between different regions in Germany, which leads to exaggerated stereotypes. However, there is no evidence that East Germans submitted to Communist oppression more willingly that other countries.

Communist regime provides a perfect explanation to East Germany being "impoverished, decaying, and paranoid under the Stasi". Invoking "innate difference between the eastern and western culture" violates Occam razor: communist regimes were established in such diverse places as Poland and Hungary, but not in West Germany which is similar to East Germany. The only thing which determined whether the nation will be free or communist was presence of communist troops (Tito's in Yugoslavia, Stalin's everywhere else).

Considering language as a divider, there is a north-south difference but not an east-west difference. See Picture of language borders in Germany, Wikipedia.de

When one splits up the German language further (German dialects), there is no real coincidence of language and West Germany/East Germany either. See German Dialects on the English Wikipedia.

When one looks at the religions that were present in Germany after the Protestant Reformation (Martin Luther), one gets the following map: Religions in Germany in 1618, German Wikipedia. As a rule, the ruler's subordinates (peasant's and townfolks) also shared his denomination.

Looking at the law, since both parts of Germany were created on the territory of the former Third Reich (Nazi Germany under Hitler), the law was the same up to 1945, so no difference here.

In terms of economy and technology, there was no significant difference up to 1945 (the end of World War II) between what would later become East Germany and West Germany. Major industrial centers were present in the east and in the west. What hurt the economy in East Germany compared to the West was that it wasn't part of the Marshall plan and a significant amount of its production facilities were dismantled by the Soviets as reparations for losses in World War II and relocated to the Soviet Union. A significant amount of production output was also passed on to the Soviet Union until 1953.

Not the answer you're looking for? Browse other questions tagged germany cultural-history or ask your own question.

25
How and why was the boundary between West and East Berlin decided to be where it was?

25
In which document was the exact course of the northern part of the German-Polish border decided?
5
How high the death rate on the Berlin Wall compared to other borders?
36
Why did the Soviet Union lift the Berlin Blockade?
19
Have Germany and Poland ever signed a peace treaty after WWII?
13
Was the Soviet Union in 1945 seeking to capture German soldiers and civilians, or drive them west?
28
What was the economic basis for West Berlin?
10
How many German expellees returned to the Hungarian People's Republic?
21
Was there a pre-determined arrangement for the division of Germany in case it surrendered before any Soviet forces entered its territory?
26
Were there luxury restaurants in East Germany?