What is the meaning of this samurai crest? 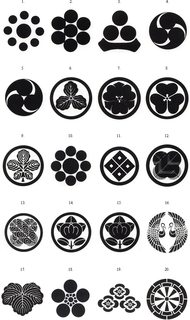 What is the meaning of the sixth crest symbol?

That appears to be a maru-ni-mitsu-kashiwa (丸に三つ柏) crest, also known as a maru-ni-makino-kashiwa (丸に牧野柏). It is an encircled, three-leafed version of the kashiwa crest designs, one of the Big Ten styles of crests. These crests features an underlying design derived from the leaf of a Daimyo Oak tree.

In Winter, dead leafs of a Quercus dentata tree do not fall until new ones starts to grow in Spring. Thus, since ancient times the kashiwa has symbolised the continuity, or the propagation of the family through generations . These are appealing elements in Japanese culture, which has historically placed great importance on perpetuating familial lineages.

As is usually the case with the more plain designs, the maru-ni-mitsu-kashiwa has been used by many clans. The most closely associated is probably the ancient Makino clan, who even lent their names to the crest. But several other families used this too, including the Kasahara, the Nagae, and the Kuriyama. One notable user was Shima Sakon, a retainer of Ishida Mitsunari. He was famed for being hired with a ridiculous salary (half of Ishida's land's income), and for fighting with ferocious bravery in the fatal Battle of Sekigahara.

In addition, there exists a huge range of different kashiwa crest designs. Here are some examples: 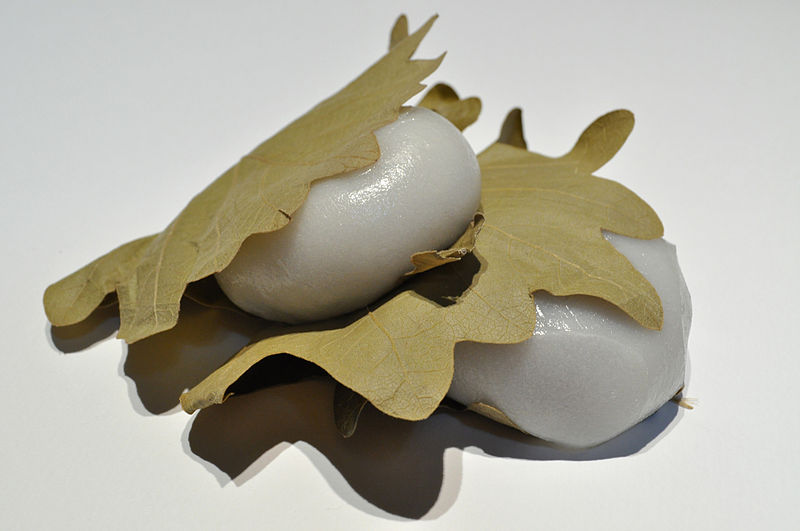 From left to right:

(I'm only naming one as an example for each; in fact there could be dozens more different clans/shrines using the same crest.)

Moreso than samurais, however, the kashiwa designs are as a group very popular among Shinto organisations, including both the shrines themselves and priestly clans. This is due to the Daimyo Oak tree being historically regarded as a holy tree; its large and study leafs a traditional (and literally green!) food container for making offerings to the gods.

A vestige of this use might be the [kashiwa mochi (柏餅)], a wagashi consisting of rice cakes wrapped in Daimyo Oak leafs, which continues to be eaten for the Dragon Boat Festival.

Not the answer you're looking for? Browse other questions tagged japan heraldry samurai medieval-japan or ask your own question.

16
What does the eighth samurai crest / symbol in this picture signify?

8
Who started the “katana is the soul of the Samurai” meme?
17
What role did the Ancient Samurai heritage play on Modern Japan during WW2?
16
What does the eighth samurai crest / symbol in this picture signify?
4
What is the symbolism behind the Sauser family crest from Sigriswil, Switzerland?
16
At what age did samurai children start going into battles in the Sengoku era?
9
What does this Samurai crest mean?
0
Katabami mon (Japanese crests of wood sorrel) Crest family identity
0
Can someone give me the history on this Japanese Crest symbol
4
Could someone help to identify this Japanese mon found on what appears to be a late Edo Period Jingasa?