What was the typical range of travel of a Pennsylvanian resident for everyday life in the late 18th early 19th Century Pennsylvania?

How much traveling did a typical Pennsylvanian resident do for everyday life in the late 18th early 19th Century (1775-1825) Pennsylvania, and what was the 'typical' range (in miles) from their home that they would generally travel?

I am referring to their range of travel from where they live, such as obtaining and selling goods and services (including crops), going to church, visiting close friends, or possibly meeting someone for marriage. If there is another specific and established term for this range, that would also be helpful to know.

This is takes into consideration pre-canal, railroad, and minimal turn-pike road system. As an explanation of why I am asking is that I am researching a specific individual from say Lancaster, PA that I know very little about. How far out from that location should I be looking for information for them and make a reasonable assumption that it refers to the same individual and not some other person with a similar name, say in Philadelphia. Also, how far would someone ostracized need to travel to not regularly run into their normal acquaintances? (Specific examples are out of scope, just an example of why I am asking)

So the root of my question is: Given that a person lived in this place and time period, how far (in miles) is the general base guideline for someone of this time period and area to be regularly traveling from their home?

My hope is that someone familiar with this time period and area would know of some general guideline used by researchers of the era. I would appreciate a 'source' based answer with reference links/bibliography if applicable so I can research further if necessary.

I'm going to answer this question by relying on data from places like New England and New York. I think patterns in New England should be fairly similar to those in Pennsylvania, with the exception that the Appalachians and Alleghenies in PA are a more formidable barrier than the Berkshires. You can see some evidence of this in the isoclimes from the Atlas of Historical Geography's estimated rates of travel from New York City in 1800: 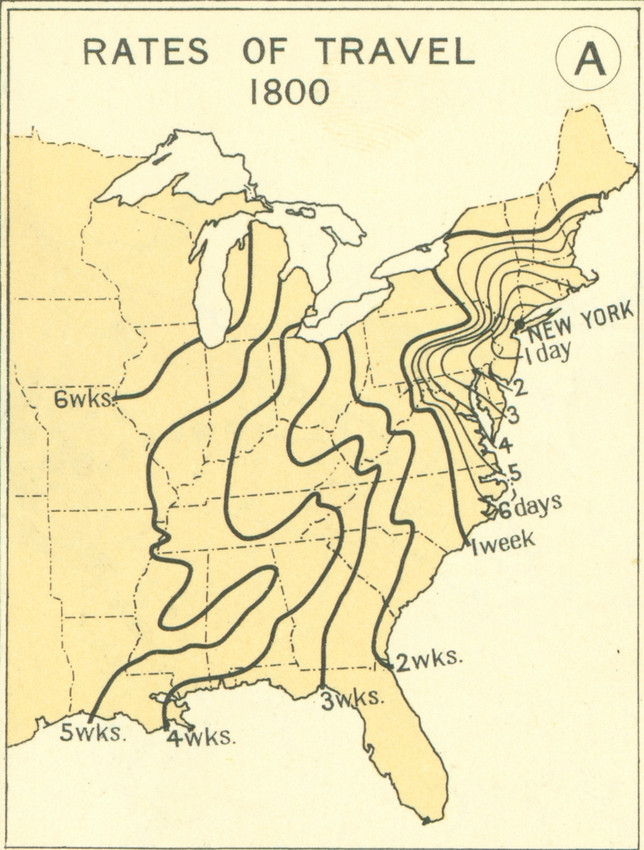 Someone from Lancaster could reach Philadelphia in about two days, and from Philly it would be easy to get anywhere along the Eastern seaboard. But the isoclimes really bunch around the Appalachians, and that isn't going to get much easier until engineers figure out how to get railroads to climb over the steep gradients of these mountains. The difficulty of such a feat is one reason why NYC overtook Philly as the country's largest city.

While the above map tells us about capabilities, this question is about "typical" travels. A good source for such a question comes from Winifred Rothenberg's studies of the movements of Massachusetts farmers, published in 1981 in the Journal of Economic History.

The first thing we learn from Rothenberg is that from 1750-1855, the vast majority of trips are around 10-25 miles in distance traveled. By the early 19th century, there are a fair number of longer trips (around 80 miles), but these never predominate. This hard-to-read graph of farmers' trips summarizes the frequency of trip lengths by periods: 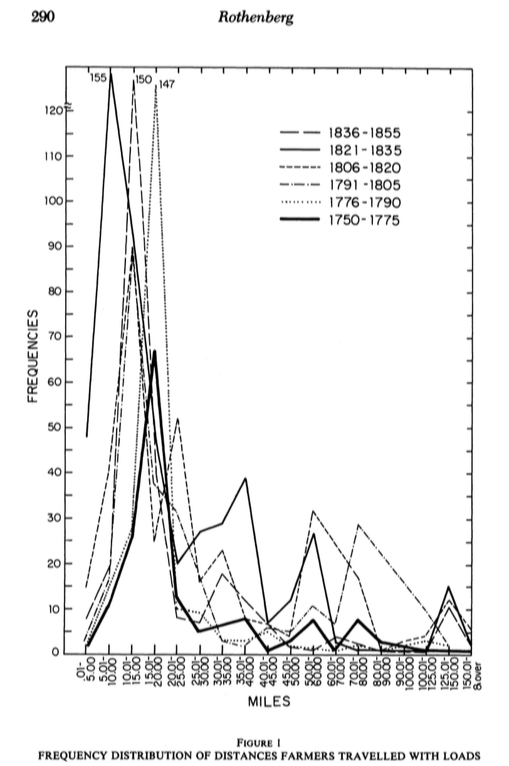 And what does this distribution look like for individual farmers? Here are the travel histories of five farmers: 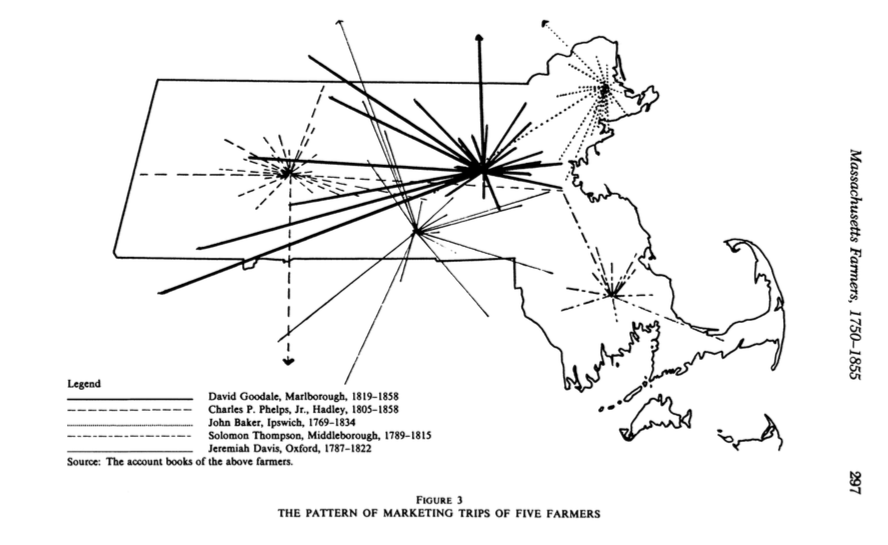 You could superimpose these stars on Lancaster and probably get a fairly good idea of how far your average farmer there would travel from home. By the way, the upshot of Rothenberg's study is that even in colonial times, prices for commodities tended to fluctuate in unison from New England to Philadelphia, implying a high volume of commerce between these cities (although obviously that commerce could be carried on by multiple middlemen).

Another source of mobility (mostly later in this period) were tramps--basically, wandering journeymen artisans. As a young journeyman, the famous Thurlow Weed tramped from Albany to New York City to Auborn, NY in search of work. As Sean Wilentz writes in Chants Democratic:

Master bootmakers from as far away as Rochester considered their finest workmen to be the older journeymen on call from Manhattan. A formal tramping system, complete with trade tickets and labor exchanges, aided the journeymen carpenters who also established a house of call for tramps from other cities in 1800. The printers traveled within the even more elaborate network, an American equivalent of the European grand tour, that stretched from New England to Pennsylvania.

Keep in mind that throughout this entire period, there is a steady drive westward. Younger sons who didn't inherit the family farm in Rhode Island might move to Rochester, NY or the Western Reserve in Ohio. For example, Paul Johnson's A Shopkeeper's Millenium has a fairly detailed accounting of the origins of families in Rochester, NY in the 1820s. Most still had close relatives in New England.

The late colonial and early national United States were a fairly well-integrated society. If you thought you'd murdered someone and went on the lam like Simon Kenton, you would need to keep moving West along with the always-receding frontier. Yet while long interstate trips were occasional events in most Americans' lives, the farmers' data show that your "typical" daily routine was still fairly limited geographically by the difficulty of travel.

Not the answer you're looking for? Browse other questions tagged united-states 19th-century social-history travel or ask your own question.