Did Churchill and Roosevelt know about the Molotov-Ribbentrop Pact, or the following secret pacts between Nazi Germany and the Soviet Union?

The Molotov-Ribbentrop Pact was the non-aggression pact between the Soviet Union and Nazi Germany prior to, and during WWII. It seems that the actions of the two countries after the invasion of Poland would confirm suspicions that they were working in concert in some fashion, but that doesn't mean that the specific secret agreements were known to the Allied powers.

My question is did Churchill, Roosevelt, or their administrations, know at any point prior to entering into an alliance with the Soviet Union that there were explicit agreements between Nazi Germany and the Soviet Union?

Churchill was not Prime Minister when the MRP was announced or when it went into effect. He wasn't even in the government at all. He was in Parliament, but mostly an exile due to his bellicose views. It was the war that forced the Conservative government to take him in, and he didn't become Prime Minister until after France was invaded, well after the carve-up of Poland occurred. In fact, the main benefit he brought to the office when he was elected Prime Minister was that he bore no responsibility whatsoever for the disaster the UK now found itself in.

Roosevelt was running an officially neutral country 10,000 miles away. There was no CIA, and Europe was (officially) at peace. I doubt he knew much of anything about it before the pact was announced.

Now the MRP had both public and private sections. The public part was publicly announced roughly two weeks before the invasion of Poland. This was essentially a non-aggression (against each other) pact. The exact extent and contents of the various spheres of influence in Eastern Europe in the pact were in secret (not publicised) clauses, which only became publicly known after the war. However, it was quite clear to everybody at the time that some kind of agreement had been struck, because the Soviet army marched into and took possession of eastern Poland while the German invasion was taking place. In the absence of some kind of prior agreement that would clearly be a hostile act.

If you were to guess at what the agreement was based on what their two armies did, you'd have gotten pretty dang close to the terms. 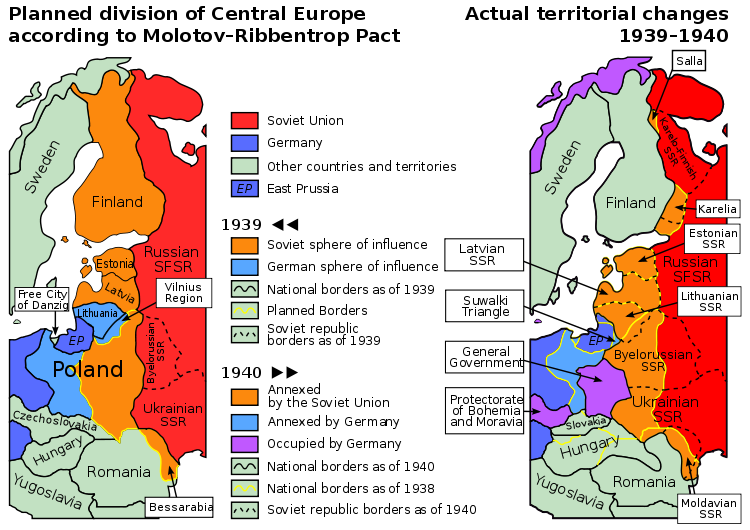 Note that the only difference here of any significance is that Russia didn't take Finland. That wasn't for lack of trying though. The only place you'd be liable to guess very wrong would be Lithuania vs. Central Poland. My understanding was that the German panzers took the extra territory as part of their encirclement tactics during the invasion, so Stalin decided to let them keep it in exchange for Lithuania (to complete his matched set of Baltic States, so he could set up hotels I guess).

So yes, certainly the UK (the USA was still not in the war yet) knew there had been deals both public and private between the Soviets and Germans when they allied themselves with the Soviets after the German invasion of Russia. It didn't much matter at that point. If either wanted to survive independently at that point they had to work together. If you read Churchill's memoirs of the war, he doesn't even particularly blame them for doing it.

The secret protocol was known to the US government as early as 24 August 1939. It was passed to US diplomat Charles Bohlen by Hans von Herwath, a German diplomat. The US ambassador in Moscow Laurence Steinhardt passed that information to US Secretary of State Cordell Hull on the same day. Hull immediately informed British Secretary of State for Foreign Affairs Edward Halifax, who in turn informed the French. But the French had already learned about the secret protocol from another source on 25 August 1939 through the contacts of their embassy in Berlin. There is also evidence that the news was immediately known to the Italians, Estonians and Latvians.

The Poles didn't know about the secret protocol and so they didn't expect the Soviet invasion of 17 September 1939. The fact that the British didn't pass that information to their Polish allies is a direct betrayal of Article 5 of the British-Polish alliance agreement from 25 August 1939:

Sources: the memories of US diplomat Charles Bohlen, the correspondence of the US embassy in Moscow, the memories of Hans von Herwath, "German-Soviet relations 1939-1941" by Slawomir Debski.

In regards to the French government, they had been informed well in advance by their ambassador in Berlin. The following is extracted directly from the French Yellow Book (my emphasis), a compendium of French diplomatic documents from 1938-1939:

I TAKE the liberty of drawing the especial attention of Your Excellency to the information contained in the enclosed report, our informant being in a particularly good position to know the intentions of the Führer and of his principal lieutenants. His new declarations may be summed up as follows:
(1) M. Beck's speech will in no way alter the situation. The Führer is determined to secure the return of Danzig to Germany, as well as the reunion of East Prussia to the Reich.
(2) The Führer is patient and cautious, and will not tackle the question in a direct way, for he knows that in future France and Britain would not give way, and that the coalition which he would have to confront would be too strong. He will go on manoeuvring until his time comes.
(3) The Führer will come to an understanding to this effect with Russia. The day will come when he attains his aims by these means, without the Allies "having any reason, or even any intention, to intervene." It may be that we shall witness a fourth partition of Poland. In any case, "we shall soon see that something is brewing in the East."
(4) The equivocal attitude of Japan has contributed to Herr Hitler's orientation towards the U.S.S.R.
(5) When the Polish question has once been settled, and Germany's military supremacy definitely assured, Germany will be in a position to come to a conference.
...
In my opinion, he may hope to draw advantage from it in three different ways:
(1) By arriving at a more or less tacit agreement with the U.S.S.R. which would assure him of the benevolent neutrality of that country in the event of a conflict, perhaps even of her complicity in a partition of Poland.
(2) By bringing, through the mere threat of a better understanding with the U.S.S.R., pressure simultaneously to bear on Japan and on Poland, in order to induce the former to sign a military alliance, and the latter to agree to the concessions he is asking for.
(3) By bringing the Western Powers, under the threat of collusion between Germany and Russia, to accept certain Soviet demands to which Poland and Rumania would be opposed, and thus to sow discord among the Allies.

And, In The Gathering Storm Churchill writes (in Chapter 20, The Soviet Enigma):

From the moment when Molotov became Foreign Commissar, he pursued a policy of an arrangement with Germany at the expense of Poland. It was not very long before the French became aware of this. There is a remarkable dispatch by the French Ambassador in Berlin, dated May 7 [1939], published in the French Yellow Book, which states that on his secret information he was sure that a Fourth Partition of Poland was to be the basis of the German-Russian rapprochement.

Churchill goes on in that chapter with extensive quotations from Parliament's debate on May 19 [1939] directly addressing the need to form a binding mutual-defense pact with the Soviet Union before Germany did, in order to secure British and French interests in Eastern Europe, in regards to both Poland and Rumania. Both his own and Lloyd George's words are featured prominently.

To conclude the chapter, Churchill notes that, following Molotov's speech on May 19th in rebuttal to Chamberlain's speech in the House of Commons earlier that day:

.... All four countries [Finland, Estonia, Latvia, Lithuania] now refused [an offer of mutual defense and support from the Soviet Union against German aggression], and perhaps in their terror would for a long time have refused, such a condition [the Soviet demand for a guarantee from all its Eastern European neighbours]. Finland and Estonia even asserted that they would consider such a guarantee extended to them without their consent as an act of aggression. On that same day, May 31, Estonia and Latvia signed non-aggression pacts with Germany. ....

It seems clear that al parties concerned, even the victims, were aware of Russian intentions - any that accepted Hitler's bond need merely have noted the value of that bond to Czechoslovakia for an assessment of its worth.

Winston Churchill speech of October 1, 1939 (it is even on youtube):

What is the second event of this first month? It is, of course, the assertion of the power of Russia. Russia has pursued a cold policy of self-interest. We could have wished that the Russian Armies should be standing on their present line as the friends and allies of Poland, instead of as invaders. But that the Russian Armies should stand on this line was clearly necessary for the safety of Russia against the Nazi menace.

At any rate the line is there, and an Eastern Front has been created which Nazi Germany does not dare assail. When Herr von Ribbentrop [German Foreign Minister] was summoned to Moscow last week, it was to learn the fact, and to accept the fact, that the Nazi designs upon the Baltic states and upon the Ukraine must come to a dead stop.

I cannot forecast to you the action of Russia. It is a middle wrapped in mystery inside an enigma; but perhaps there is a key. That key is Russian national interest. It cannot be in accordance with the interest or safety of Russia that Germany should plant itself upon the shores of the Black Sea, or that it should overrun the Balkan states and subjugate the Slavonic peoples of Southeastern Europe. That would be contrary to the historic life interests of Russia.

But here these interests of Russia fall into the same channel as the interests of Britain and France. None of these three powers can afford to see Rumania, Yugoslavia, Bulgaria, and above all Turkey, put under the German heel.

Through the fog of confusion and uncertainty we may discern quite plainly the community of interests which exists between England, France and Russia to prevent the Nazis from carrying the flames of war into the Balkans and Turkey. Thus, at some risk of being proved wrong by events, I will proclaim tonight my conviction that the second great fact of the first month of the war is that Hitler, and all that Hitler stands for, have been and are being warned off the East and Southeast of Europe.

Taylor writes in The Origins of the Second World War that the Pact was a total surprise for Britain . PP 257 and 292

Not the answer you're looking for? Browse other questions tagged united-states world-war-two soviet-union united-kingdom nazi-germany or ask your own question.

17
What do we know about Hitler/OKW's plans concerning USSR if Molotov/Ribbentropp Pact hadn't happened?
5
What are the "blue books" of Mr. Balfour?
5
How come the British did not notify the Poles about the Molotov-Ribbentrop secret protocol?