How did the Germans get housing again after WWII?

After a large number of homes were destroyed in the war, how did the average German become a homeowner again?

I know about the Marshall Plan, but this question does not refer to how the economy in general was handled.

Take an average German urban family in late 1945 for example. They lived in a flat which is now a piece of rubble, with all their possessions gone, and so is the situation of most of the city. Nearly everyone is homeless. The city is almost completely destroyed. Their government has collapsed, and the country is under foreign military occupation. What do they do now?

How did such an average family become a homeowner again? What if they lost everything during the bombings, even all kind of personal identification? How was it handled? In less than a few decades almost everyone had a home, a job, and a good standard of living.

They lived in shanty towns and makeshift shelters until the government built apartment blocks. In many cases families lived in shacks or even tents for years. When I was a young boy I was friends with two girls whose mother had come from Germany and had been a little girl during the war. Once they showed me a handful of photographs her mother had saved. One of the photographs was of her home, which was a corrugated tin shack in a railroad yard. The dimensions of the shack were about 8 feet by 8 feet by 6 feet tall. This was where she and her mother lived. Her father was killed in the war and her grandfather had been a surgeon, but also died by that time.

There were so many homeless people that those who could be housed in concentration camps were the lucky ones. Many, like my friend's mother, lived in shacks that they hid away wherever they could. Millions of the less fortunate who were captured in allied dragnets were at first kept in open fields called "Rheinwiesenlager". These were large grass fields of thousands of acres surrounded with berms and guarded by soldiers with machine guns. After a few months the allies opened these camps and released millions of completely destitute people to shift however they could, or be funnelled to DP camps.

People took shelter in basements, old military bunkers, pillboxes, and even just caves made out of rubble. The only regular food were bread rations given out by the US Army. In 1946, the ration was 1275 calories, and to get this you had to sign up, be interrogated and risk being arrested for "war crimes" or be put into a "de-nazification" prison.

There are very few photographs from occupied Germany because it was illegal for Germans to own cameras and similar regulations were enforced to prevent allied soldiers owning cameras or from taking pictures. It was also illegal to take aerial photographs of occupied Germany.

This situation only persisted until 1948. In 1949, with the founding of the Republic of Germany the new government began large, subsidized housing programs, which included both apartment blocks and single-family homes. Even with these programs Germany has a relatively low rate of home ownership today and most Germans rent their dwellings. Two photographs below show the progression. The first, circa 1949, shows Quonset huts in Hamburg. Notice the large rectangular bomb shelter in the center that survived the bombing. The second photo from the 1950s shows the same view after government-subsized housing had been constructed. 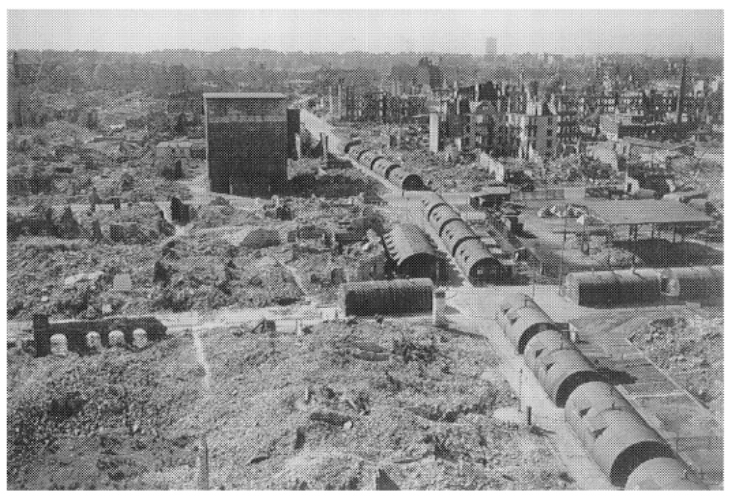 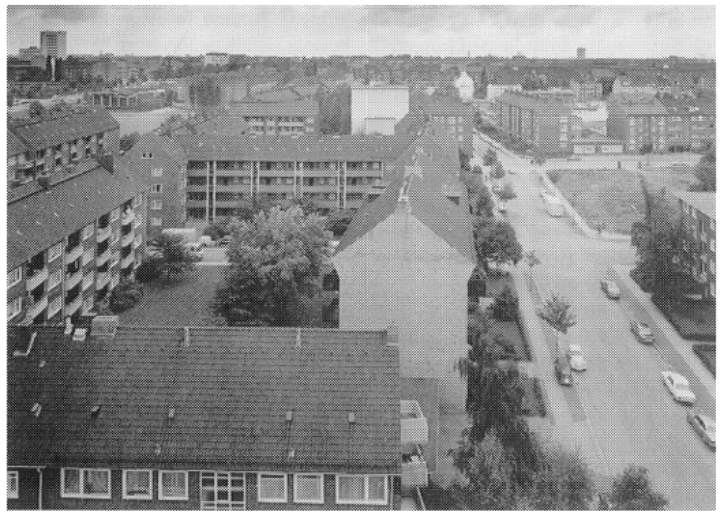 Hamburg before and after government subsized housing program. Notice the gigantic square bomb shelter has remained throughout.

I'd like to add this as "anecdotal" answer, not as definite but as additional data point:

In some cases entire new towns were created, especially for the "ethnically cleansed" as they're now called. Meaning the refugees and those driven from their original homes in Silesia and the Sudetenland, which fell to Poland and Czechia, respectively.

One such town is Waldkraiburg, east of Munich, mostly inhabited by Sudeten-German, such as my own grandparents, who originally came from Gablonz on the Neisse, now Jablonec na Nisou.

Not the answer you're looking for? Browse other questions tagged economy germany world-war-two post-war or ask your own question.

5
What was the rationale behind restrictions on camera ownership in post-war Germany?

30
Was the Italian campaign a strategic mistake?
13
Was the Soviet Union in 1945 seeking to capture German soldiers and civilians, or drive them west?
14
Did the German authorities respell Polish personal names to be more German during the time of the German Empire?
21
Where did Japan get their oil during WWII?
5
How was real estate from Germans expelled after WWII redistributed?
5
What was the death rate of Germans outside Germany's post war border after World War 2?
8
Why did the expelled Sudeten Germans and Danube Germans go to Germany, as opposed to Austria?
2
Was there a German re-urbanization plan for after WWII?
1
Why were some German and Japanese cities bombed more than others during WW2? Is there a scientific consensus?
9
How significant was the literary loss due to WWII?