How did Asian Americans manage to become richer than an average American? [closed]

Personal and Household income in the United States in 2005: 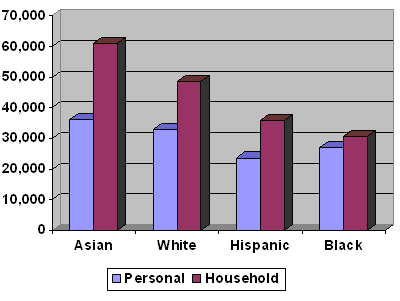 How did they achieve this even though they originally came from countries much poorer than the United States?

There is no good answer to this question as posed, because many Asian-American ethnicities are poorer than the U.S. general public. In fact, Asian Americans' high incomes are largely due to Indian Americans, which is not necessarily the group most Americans think of when they hear the term "Asian American."

The Pew Research Center survey was designed to contain a nationally representative sample of each of the six largest Asian-American groups by country of origin—Chinese Americans, Filipino Americans, Indian Americans, Vietnamese Americans, Korean Americans and Japanese Americans. Together these groups comprise at least 83% of the total Asian population in the U.S.

The basic demographics of these groups are different on many measures. For example, Indian Americans lead all other groups by a significant margin in their levels of income and education. Seven-in-ten Indian-American adults ages 25 and older have a college degree, compared with about half of Americans of Korean, Chinese, Filipino and Japanese ancestry, and about a quarter of Vietnamese Americans.

On the other side of the socio-economic ledger, Americans with Korean, Vietnamese, Chinese and “other U.S. Asian” origins have higher shares in poverty than does the U.S. general public, while those with Indian, Japanese and Filipino origins have lower shares.

Not the answer you're looking for? Browse other questions tagged united-states economy social-history asia labour-history or ask your own question.

5
What precipitated the rise of social safety nets in the United States?
11
How common was it for Americans to visit Europe in the late 19th century?
34
Did people use to marry much younger during the last millennium?
6
How did life change for the average American as a result of the end of World War 1?
10
In segregated South, would Asian-Americans be treated as “colored” or as whites?
3
Was Woodrow Wilson really a Liberal?