Did the Great Wall of China help cause the fall of the Roman Empire?

I recently came across a saying that "Rome fell essentially because China built the Great Wall" (to protect itself against the Xiongnu people, if I remember correctly) in a lecture series on peoples from the steppes. There are claims that this was once a popular theory.

A once-popular theory of history held that Rome fell because China built a wall. In other words, the construction of the Great Wall of China forced nomadic peoples outside the wall to turn their attention westward, eventually destroying the Roman Empire.

How much truth is there in this? If there is, what are the series of events that lead to the fall of Rome which were triggered by building of the Great Wall of China?

There is very little truth to this claim, if at all.

The fall of Rome is conventionally dated to A.D. 476. By then China had long been overran by steppe nomads. Since 439, the North China plains - heartland of Chinese civilisation - have been united under the Northern Wei Dynasty. This was a nomad empire, founded by a Mongolic tribe known as the Xianbei, and followed over a century of fragmented barbarian rule in the north known as the Sixteen Kingdoms of the Five Barbarian Peoples.

In fact, as early as 304, China experienced it's own Crossing of the Rhine moment. Nomadic tribes, exploiting the Jin Dynasty's weakness, established kingdoms on Jin territories in quick succession. This even is known as wǔhú luànhuá (五胡亂華), literally, the Five Barbarians Throwing China into Turmoil. Subsequently hundreds of thousands of nomad tribesmen flooded into China, triggering massive waves of native refugees to the south of the Yangtze . By 316, the Jin Dynasty had disintegrated. 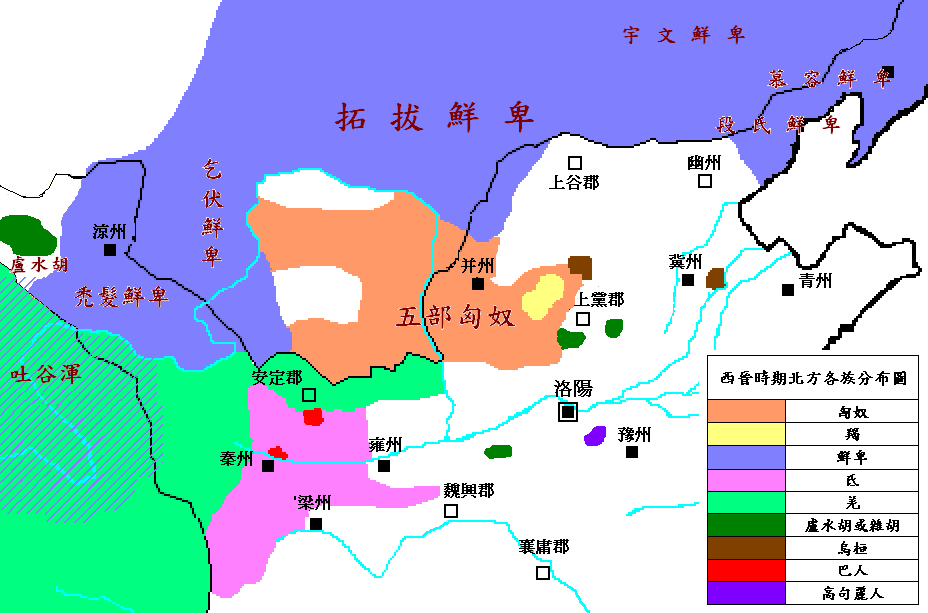 Barbarian presence in the Jin Empire, early fourth century. Blue denotes the various Xianbei tribes; orange is the Five Xiongnu Tribes; pink represent the Di people; green is the Qiang people and yellow is the Jie people. Smaller groups include ancient Koreans (purple), native Shichuanese (red), and other nomadic groups that were driven out of the steppes earlier (dark green, brown).

A native Chinese state reconstituted itself in 317 as the Eastern Jin, but never mustered the strength to retake the north.North China did not return to Han Chinese rule until an (ostensibly Xianbei-assimilated) general usurped the throne of the last Northern Dynasty, Xianbei Zhou.

In conclusion, the idea that the Great Wall forced the nomads west does not make much sense. They were in fact extremely active and relatively successful in China throughout this period.

Most of the Great Wall of China as we know them today were built during the Ming Dynasty, circa European Late Middle Ages. However, they were by no means the earliest. The first walls were built during the Spring and Autumn and Warring States periods, 771 to 221 BC. Originally these were largely piecemeal fortifications erected by the fragmented ancient states of China for their own defences.

Later the Qin Dynasty unified China. It initiated an ambitious building program that linked the ancient walls into one cohesive defence line. This became known as the Great Wall of Qin, and marks the first appearance of a genuine "Great Wall". These efforts were continued by its successor Han Dynasty. However, it went into decline around the start of the Common Era.

Thus, Rome became Mistress of the World after most of these first generation (so to speak) Great Walls were built. Roman territorial extent reached its height a century after Chinese expansion into the Steppes began to be reversed. This stands in opposition to the claim that building the wall caused Rome's fall.

This doesn't really have anything to do with walls, but some nomadic tribes were forced westward during the Han Dynasty. Under the jingoistic Emperor Wu in particular, Han armies launched several expeditions deep into the steppes between 133 to 119 BC. A period of peace followed as the overexerted Han Empire found itself teetering on the brinks of collapse, but open warfare resumed after 103 BC. By 71 BC, the Han empire had clearly prevailed.

It is often suggested that some (but not all!) of the defeated Xiongnu tribes fled westward. One popular theory is that this created the Huns. Whether true or not, any move west would have had almost nothing to do with the Great Wall, except that it was extended to help safeguard conquests. Furthermore, this occurred during a period of great Roman strength. It is quite dubious to say that the Xiongnu being driven west caused the fall of Rome on the other end of Eurasia, some 400 years later.

At any rate, many Xiongu groups simply surrendered to the Han. They took an early and active role in the subsequent uprising in AD 304 mentioned earlier.

There is absolutely no evidence linking the collapse of the Roman Empire with the construction of The Great Wall of China.

Not the answer you're looking for? Browse other questions tagged ancient-rome ancient-china steppe-nomads or ask your own question.