David Duke has a video on YouTube about Jewish participation in various slave trades in Western history. At the 7:40 mark he states:

It's unclear if he means that those percentages were the average during the period of the nation's founding up until the Civil War, or just during one period of the pre-Civil War era. He claims to be using Jewish sources for these stats.

Are these claims valid?

There is some truth to the claims, but the numbers are extremely prima facie distorted. Especially since they are (apparently) given in terms of "households", with no immediately obvious method by which such figures were fitted to a preconception "estimated" calculated[Note 1]. Even if his numbers are accurate however, they do not necessarily reflect the true picture[Note 2] and should only be taken with a very large grain of salt.

Full disclosure: I have not opened that youtube link, and have no intention of doing so. Please fill me in if I'm misrepresenting his position.

In terms of actual persons, on the eve of the Civil War, the census showed 393,967 slave owners in the United States.

It would also be interesting to know just what portion fo the Southern population actually composed the so-called "slavocracy." Unfortunately, the official United States census did not include "slaveholder" as a data category until 1860 ...

The census showed 12,240,293 of the country's total 1860 population of 31,183,582 lived in slaveholding states. The total number of actual slaveholders was only 393,967. This represents just 3.2 percent of the total Southern population and just 1.26 percent of the nation's population.

In contrast, approximately 25% of all Jewish southerners owned slaves.

The last figure is in broad agreement with the previous source - 1.25% of 393,967 total slave owners would equate to 4925 Jewish slave owners.

So there is some essence of truth to (what I presume to be) the main point here, which is that Jewish southerners were more likely to own slaves (25% vs 3.2% 4.9% [See below] of census persons). The veracity of his actual figures (e.g. "40% of household") is a completely different matter altogether.

Of course, the error is that 25% was the number of Jewish southerners, while 1.26% was the entire population of the United States. In fact, the number of whites living in the slave states were only 8,039,000. Those 393,967 slave holders would actually represent 4.9% of that population (thanks to @UriZarfaty for pointing this out). Applying the formula, that becomes 7.84% - nearly four times as many as claimed.

Therefore, without even going into the soundness (or lack thereof) of his calculations, it is obvious these figures are bogus in error.

Regardless of factual accuracy, such numbers are almost completely meaningless, because they do not account for any other difference in demographics besides religion. For example, poorer people were less likely to own slaves than wealthier families. How did the population of southern Jews compare to whites in this regard?

It could well be the case that if we normalise for all other factors, we will find no statistically significant difference between Jews and the overall population in terms of slave ownership. Without accounting for all factors, this becomes a case of (as @TomAu pointed out) comparing apples and oranges.

For those Jews who did own slaves, the records demonstrate that they were not significantly different from other masters in their treatments of their bondsmen.

In all honesty I'm inclined to think his numbers were manipulated chosen specifically to inflate Jewish participation in slavery.

Short Answer: Jewish southerners did not differ from other white southerners in their rates of slave ownership.

Long Answer: Because the U.S. Census does not record religious affiliation, all figures regarding Southern Jewish ownership of slaves are necessarily imprecise estimates.

As best I can tell, Duke gets his "40%" figure from a study by Malcolm Stern summarized here by Bertram Korn:

My colleague, Dr. Malcolm Stern, has investigated the 1790 manuscript census returns in his genealogical researches, and has generously provided me with the relevant data. Unfortunately, the returns for Georgia and Virginia were destroyed, but the South Carolina data provide valuable insight. Seventy-three heads of households have been identified as Jewish; of these, at least thirty-four owned one or more slaves, to a total of 151 slaves. The only large holdings of slaves were possessed by Jacob Jacobs of Charleston (11), and Abraham Cohen (21), Solomon Cohen (9), and Esther Myers (11), all of the Georgetown District.

The better estimate for rates of slave ownership would be the one Semaphore found in Junius Rodriguez's Historical Encyclopedia of World Slavery. That entry estimates that 25% of Jewish Southerners owned slaves. That estimate seems to come from a study of wills, summarized here:

Another statistical indication of Jewish ownership of slaves, probably more accurate in terms of proportions than the census returns, are references to slaves in Jewish wills. Over the years, Professor Jacob R. Marcus has assembled at the American Jewish Archives, one hundred and twenty-nine wills of identifiable Southern Jews who died during the period of our interest. Of these, thirty-three refer to the ownership and disposition of slaves. This would mean, if it is a reliable index, that perhaps one-fourth of Southern Jewish adults were slave-owners. It is instructive that this matches the Federal figures for the 1860 census, namely, that three-fourths of the white population of the South were not slave-owners.

Based on a sample size of 129, it is again important to realize that 25% is a very imprecise estimate and is potentially biased upward: because you don't need to make a will if you don't have property to pass onto your heirs, this method may miss poorer, non-slave-owning Jews. Still, the main finding--that Jews and Christians did not differ much on this dimension--seems sound.

Due to a lack of data on religion, it's hard to make an exact estimate of the percentage of Southern Jews who owned slaves, but the best estimates show that Jewish Southerners were fairly similar to their Christian neighbors in this regard. Due to the small size of the Jewish population in the South, the best takeaway is still Korn's takeaway:

Slavery, therefore, played a more significant role in the development of Jewish life in the Old South, than Jews themselves played in the establishment and maintenance of the institution. The history of slavery would not have differed one whit from historic reality if no single Jew had been resident in the South.

If you want to check the math about the percentage of Southern families owning slaves, you can refer to these figures. Here's my tabulation: 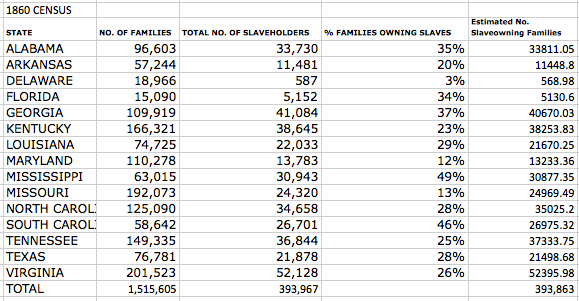 I could not believe what outright blatant propaganda this is. 5,000 is 25% of 20,000 - "they represent a very tiny percentage of the jews residing in the south" thats a blatant lie - 25% of those 20,000 owned slaves. Then he tries to "spin" it by throwing in that jews were 1.25% of the slaveowners in the south.That doesn't change the fact that 25% of jews owned slaves in the south.

Not the answer you're looking for? Browse other questions tagged united-states 19th-century social-history jews slavery or ask your own question.

7
Slave owners mobbed and murdered?
9
How widespread was dueling in the United States from its formation to 1860?
3
Did any slaves with Jewish owners ever adopt Judaism?
34
Was slavery in the United States legally limited to blacks?
8
Free states and slave states - how did that work?
6
Financing of the Continental Army vs. Legion of the United States/United States Army
9
What % of slave owners in the antebellum south committed rape?
4
Was Woodrow Wilson really a Liberal?