I am attempting to determine the class, size, features, history of the British ship "Dragon" c. 1732 that was known to arrive in Philadelphia on September 30, 1732 with 173 men, women and children Palatine immigrants AND crew total from Rotterdam under the (assumed) command of Charles Hargrave per the following document. 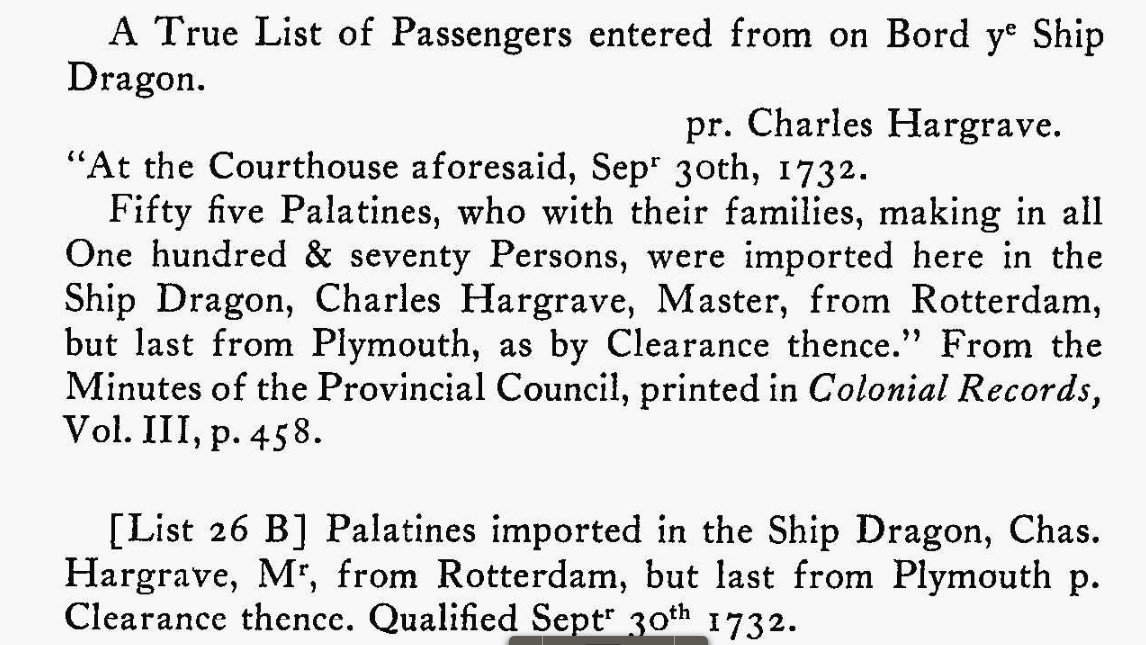 In one document (1 only, and unsourced) I have also seen it referred to as the "The Good Dragon".

I know there is a lot of information copied about the passengers on it, but I am curious about the ship itself.

Lloyds Register does not go back that far beginning in the 1760s and it may have changed names by that time and likely captains. Other references ships named Dragon I have found so far do not in service during this time.

My primary question is the class of the ship itself and where I may find general information about learning further about that class or even that specific ship.

I did find a reference to HMS Dragon 13 Dec 1709. Perhaps that's a different ship. Because I found below pretty conclusive evidence Charles Hargrave was a merchantman in 1747.

I found Charles Hargrave page 180 in 1744/47 as master of a different ship "Mercury" at the port of Annapolis Maryland.

Charles had a pretty interesting life.... Found this about Charles Hargrave also 1747.

I could find no records of the ship, but almost certainly it was an English frigate or a smaller 3-masted barque. Frigates were the desirable mode of transoceanic passage in the 1730s. In many cases the British admiralty would rent out old navy ships for use as passenger vessels. One possibility for the exact type would be what was called a "fifth rate" or "sixth rate" two-decker". Unfortunately, a list of Royal Navy frigates does not show any named Dragon. Sometimes ships were renamed when they entered civilian service so it is possible one of the 5th or 6th-rate ships on this list is actually the ship wanted.

Another possibility was that it was a smaller, commercial barque. Barks were relatively small ships that were used for the poorer emigrants. They were stuffed in and suffered high mortality rates. The passage was very dangerous because the ships were barely seaworthy for such a long voyage (6-8 weeks). Barks had a lot of different sizes and configuration. A typical bark looked like this: 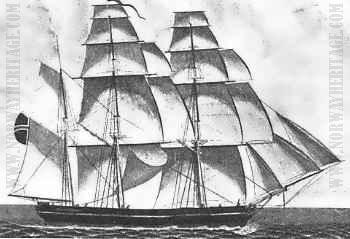 I realize that you are hoping for some kind of exact record of the ship, but the higher probability is that none exists. There were thousands of small barques in those days and if you even know the name of them, it is an exception. Also, those ships frequently changed names so a ship might be one thing, and the next year something else.

in the historical records one anthony crow deserted from the Ship Dragon after 1775. I found several years ago in the ETSU library, the Dragon with the name of my ancestor from Palatine Germany. He and his wife Anna came on the Dragon to Philidelphia in 1732. His name was Peter Schlosser. I do not have that research information written down or remember the book that I found the Dragon. This historical record is, Virginians in the Revolution 1775-1781, page195.

I don't remember which genealogy site I copied this from, but it should be of interest for those reading this thread. The Caspar Sain (Zurn) mentioned is my direct ancestor, and was a Palatine German, as were most passengers.

On September 26, 1749, 563 passengers from the Palatinate and Zweibrucken, with Casper Sain listed among the voyagers, arrived in Philadephia. [1] According to Charles Sain, before the journey across the Atlantic, "Casper Zurn, along with other passengers signed the following contract:

'We, the undersigned, I George Spencer Captain of the ship "Dragon" on the one part and we passengers on the other part, accept and obligate ourselves hereby as persons of honor. On the first part, we passengers, in order to undertake our voyage hence to Philadelphia in North America with the above mentioned Captain George Spencer, are obligated to behave ourselves quietly and as good passengers during the voyage, and to be fully satisfied with the food below specified, agreed upon between the captain and ourselves, and as regard water and further provisions, to comply with regulations the Captain shall find necessary in view of contrairy winds and the requirements of a long voyage. In the second place, we agree to pay our passage with the following stipulations: Those who are in position to settle (for the passage on money) in Rotterdam, to pay for one person whether man or woman (children under 4 years old being free). From 4 to 14 years 7 1/2 guineas, from 14 and older 15 guineas. Those who pay their passage in America shall be bound to produce it within 10 days. No passenger shall be allowed to leave the ship in America without knowledge of the Captain, especially such as have not yet settled for their passage. If one of the passengers die on the voyage, the family of such a person shall be obliged to settle for his passage, if he dies beyond the middle point of the voyage hence. But if he dies on this side of the middle point the loss shall be to the account of the Captain. On the other part, I Captain George Spencer, obligate myself to convey faithfully the undersigned passenger to Philadelphia in North America, if God grants a prosperous voyage, to furnish them with the necessary conveniences on the ship, and further to provide the food herein below specified for this conveyance the above mentioned passage money must be paid to me. Distribution shall be made daily among these passengers, to wit, to one full passage. (a half passage in proportion, and for children, nothing): Sunday - A pound of beef with barley Monday - A pound of flour and a pound of butter good for the hole week Tuesday - A half pound of bacon cooked with peas Wednesday - A pound of flour Thursday - A pound of beef with potatoes Friday - A half pound of rice Saturday - Peas, a pound of cheese and six pounds of bread for the hole week and one half pound of bacon A quart of beer and a quart of water per day. Vinegar, also, is to be taken along on the ship, not only to keep the same clean, in order to insure good and fresh air, but also for the refreshment of the passengers. Since beer sours during the voyage and is very harmful to the health of passengers, only enough beer for the part of the voyage will be taken along, and when this is gone, a double portion of water will be given. Half of the water will be supplied for cooking. Each morning a small glass of Holland gin and each week now and then some vinegar. We promise to fulfill all the above mentioned and to this end bind our persons and property as of light.' All of the passengers signed the above document at Rotterdam prior to boarding ship." [2]

Not the answer you're looking for? Browse other questions tagged british-empire naval identification or ask your own question.

11
What is the origin of the English Ship Building Philosophy?
4
What type of provisions would seafarers use in the mid 19th century?
6
What type of ferry boats were used in England in the early 19th century?
5
What were the needs of the US Navy that resulted in the production of both the Arleigh Burke class and Ticonderoga class in the 1980s?
6
What was the size of the British East India fleet at the end of the War of 1812?
2
What were the casualties and ship damage on each side of the Battle of Plum Point Bend, Tennessee?
2
When was the first sauna on a ship?
13
Have any artifacts or archaeological remains from the White Ship disaster of 1120 ever been recovered?
8
Why was the ship "Palmyra" so named?
4
What was the fastest coal-powered ship in a country's navy?