How were little children dressed in medieval times? [closed]

Ask Question
Asked 5 years ago
Active 5 years ago
Viewed 2k times
-2
Closed. This question needs to be more focused. It is not currently accepting answers.

So I wonder how did people dress their children for simple things in medieval times. What kind of clothes? Were there real clothes (pants/shirts) for (normal/poor) children? Or were some random fabrics used to wrap them into something?

(I'm not looking for a historically perfect correct answer but more for an idea. Correct examples would be awesome. When I google I get pretty noble dresses. That's what I don't need.)

Example scenario:
Warm outside (warm summer). Mother sits with her 2-yo child outside the house and plays with him/her.

This book chapter, "Childhood in History" by Pat Thane, mentions how children dressed in medieval times in brief. For most of medieval Europe, children dressed much as adults did, which is very much like today (with the exception of school uniforms).

In the past few years understanding of such historical changes has been much influenced by the work of Philippe Ariès.1 Ariès has argued that in medieval Europe ‘the idea of childhood did not exist’. Rather, individuals moved directly from the physical helplessness and dependency of infancy into adult society—if, that is, they were among the minority who lived to complete this vulnerable early period of life. Thereafter they dressed like adults, spent most of their time in adult company, sharing adult conversation, games, sometimes sexual activities. There was no trace in such activities of the modern consciousness of a particular nature of childhood, distinguishing the child and his or her proper activities, physical and emotional needs, from those of the adult, no assumption that after infancy ‘children’ required particular treatment. Infants, though treated with care and affection, were hardly regarded as individuals.

During the 16th and 17th centuries, and especially among the upper strata of society, there emerged the idea of children as innocents and separate from adulthood, and this also involved differences in dress. Although this is not medieval, the phenomenon may have appeared as early as the 13th century.

From the thirteenth century, Ariès argued, and most notably in the sixteenth and seventeenth centuries, a new consciousness emerged, at least among the prosperous middle and upper strata or society, of the specifi c nature childhood, of a period between infancy and adulthood which was different in character from the preceding and succeeding age periods. This was first manifested in an attitude towards children as playthings, creatures to be coddled who were objects of affection and amusement for adults. Childhood in this sense lasted hardly beyond the age of five or seven. It was marked by the emergence of separate forms of dress for young children and by a conception of children as innocents, unpolluted by adult knowledge.

If you want to see some actual examples (photos, diagrams, paintings) of how medieval children dressed, here are some useful links:

Here's an example (public domain), the source is French: 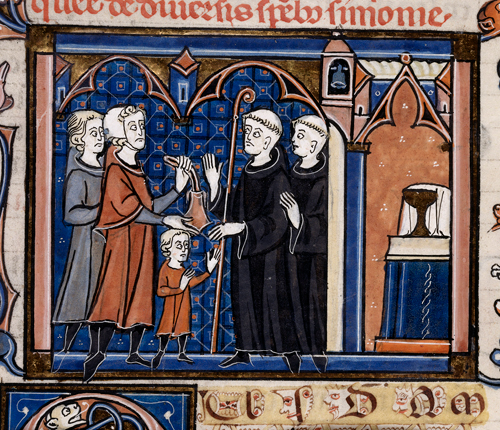 Note the striking similarity in dress between the boy and the adults.

Not the answer you're looking for? Browse other questions tagged middle-ages social-history clothing or ask your own question.