In the photo below, my grandfather is photographed center with another 29th Division soldier during World War I and a person on the left whose uniform I cannot identify. Is it French? My grandfather told his wife and daughter (for years) that he never left Alabama during the war (Camp McLellan), but unless French soldiers came to Camp McLellan to train, I'm guessing that he really went to France with his division. 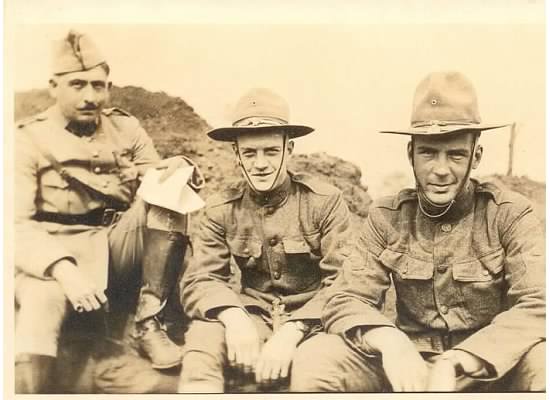 The soldier on the left of the photograph is almost certainly French. Notice his cap - the center front part of the cap is slightly split - that was characteristic of the French. U.S. garrison caps did NOT have the split. My grandfather was with the 29th Division also and went from private to sergeant before he was gassed by the hated Boches!

It is an American uniform of the type often worn by officers.

He is wearing an overseas cap, which indicates he may have served in Europe or was slated to be sent over. He may also just be wearing the overseas cap as a way of suggesting he has experience. His whole outfit fits the expeditionary picture, though, so I would guess he has actually spent time in France.

The story on the Sam Browne belt is that Pershing, on his own authority, issued an order to his men allowing them to wear the Sam Browne belt. This was in violation of US Army uniform regulations. Nevertheless, Pershing wore the belt and he was widely imitated by officers, especially. Among well-equipped expeditionary forces it was not unusual to find entire units, elisted men and officers alike wearing the belt, but in the United States it was generally only the officers who did so.