Identification of ship and seaplane type

Can anyone give clues on the type of ship and seaplane and the time frame? 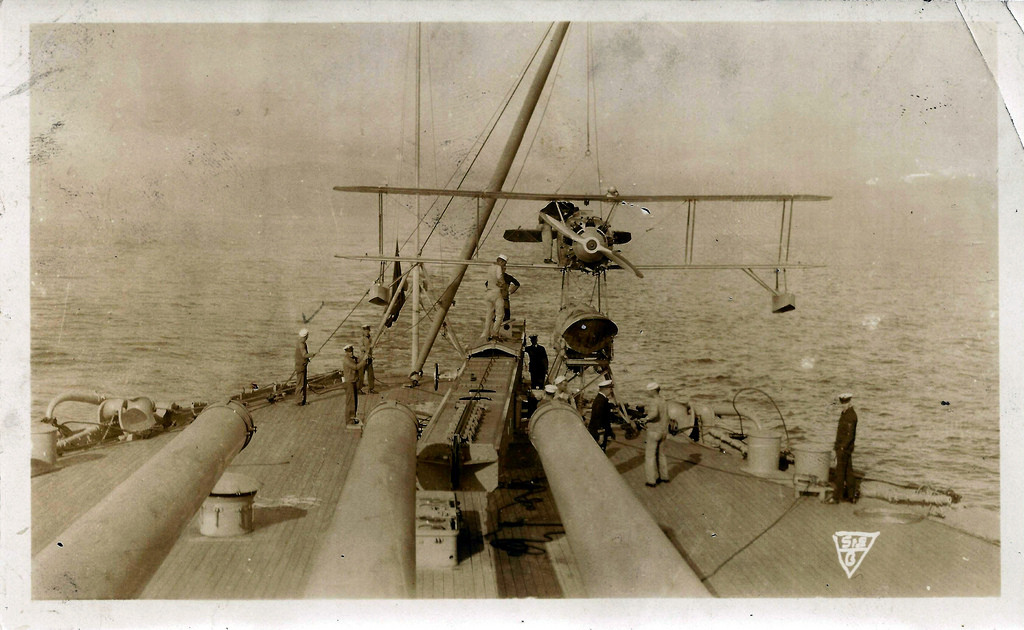 The seamen look USN-ish, the barrels of a heavy triple turret are in view in the foreground. This looks like the quarterdeck of a USN 14 inch gunned battleship in the inter-war period. In fact the aircraft looks near identical to the one in the photo of the Oklahoma allegedly circa 1920 attached. Not that the ship is necessarily the Oklahoma. 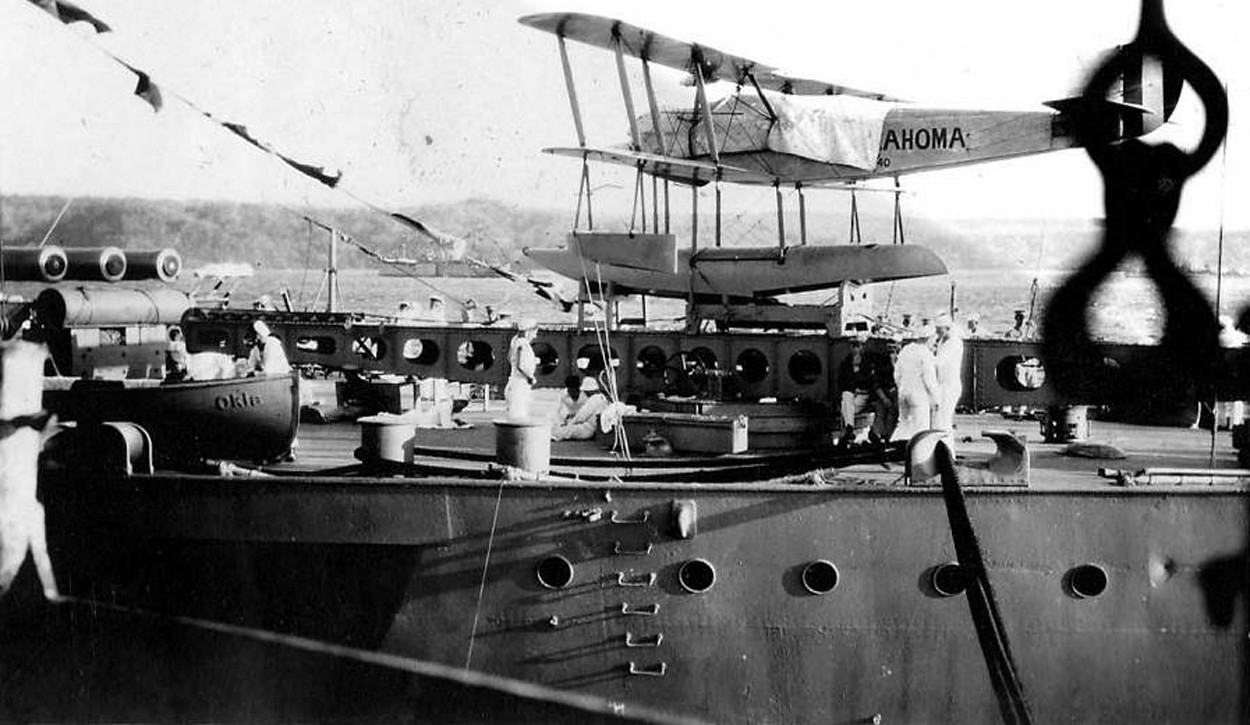 Further research indicates that the aircraft in question is very probably a Vought UO-1 which means that the original photo probably dates to between 1922 and the late 1920's. Here is a better photo of one of the OU-1s from/on the California (the more I look at this latter photo the more I suspect that the original photo was also on the California and only minutes before or after this one - The officers and men are in the same rig and look at the way the rope on deck in the mid-ground is laying, ... even the shadows are similar sized and oriented): 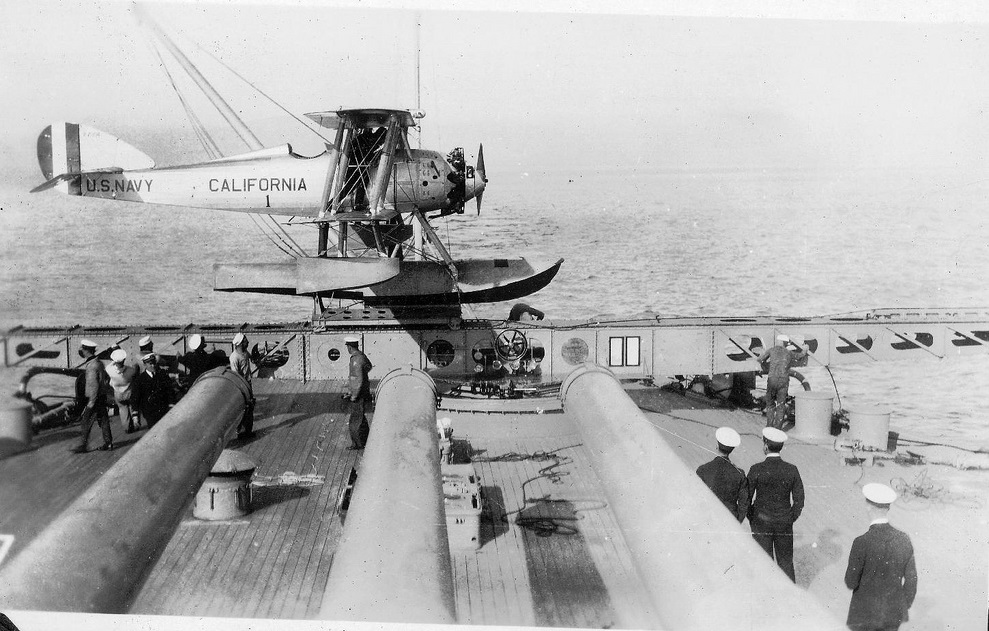 Conclusion: the plane is a Vought UO-1 and the ship is the USS California, BB44.

The ship and plane look very similar to this one: 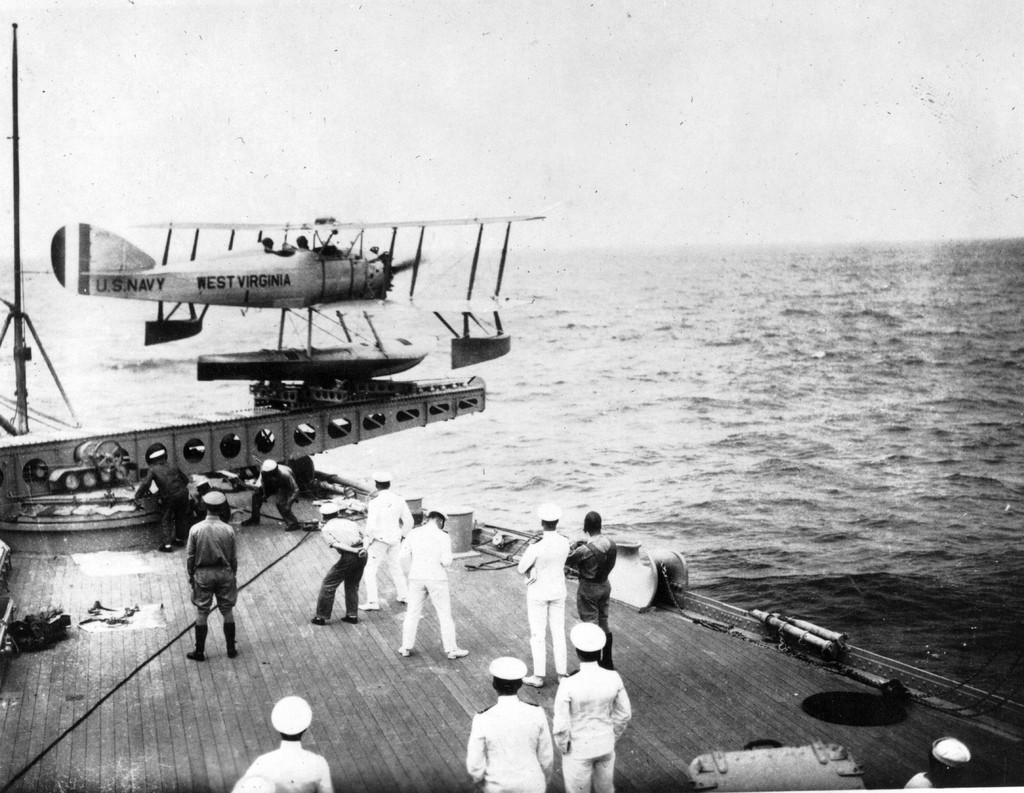 via San Diego Air and Space Museum Archive's Flickr stream. Another picture in the same stream shows the same scene from a different angle, including the guns.

The ship, its deck and launching mechanism, the plane and its landing gear look almost identical.

That would mean you're looking at the USS West Virginia some time before it was sunk in the attack on Pearl Harbor.

West Virginia had four twin 16"/45 turrets, so the original photo can't be a Colorado Class battleship.

We need one with a triple turret, like the prior Tennessee class, with 4 triple 14"/45 turrets, which had only Tennessee &California. The New Mexico Class seems to look the most like it, especially as to the angle of seeing the guns with the shorter fantail (Mississippi, New Mexico & Idaho). But the Pennsylvania Class's triple turrets are also a possibility (this included only Arizona & Pennsylvania).

We'll try to ID the plane later, which we're pretty sure is a Vought.

EDIT: Yup, Vought UO-1. Here's a plan of it that lets you see how the nose matches up, the length of the wings, &c.

The photo shows it in a cradle on land, but in this case it's specifically one off the Tennessee. An image search on Google will keep you busy for an hour.

Vought already had a two-seat observation plane, the UO-1, basically a VE with additional fuselage streamlining and a Wright J-3 radial engine.

Not the answer you're looking for? Browse other questions tagged military identification naval or ask your own question.