At the end of WWII, were Nazis working on any other super weapon besides V-2?

At the end of WWII, were Nazis working on anything else besides the V-2? If so, what was it, how close was it to completion, and could it have potentially turn the events around for them?

Wunderwaffe (literally, wonder weapons) - absolutely, they had many, many designs under way.

They were working on the A9/A10 (imagine it as an evolution of the V1/V2 series of rockets), that would be a multi-stage ICBM that would be able to hit the US, although it wasn't likely to be very accurate. This was planned to be available from 1946.

The Nazi's had already tested firing V2s from submarines, the plan here was to allow them to launch at the mainland US from U-boats just off the coast of the US. They had actually manufactured three of the required launchers to do this and had conducted extensive tests by the end of the war.

No doubt you have already heard about the Amerika Bomber, there were several candidates under various stages of development. Hitler had a fascination with bombers and so this was one area of development that got a lot of funding, at the expense of other, arguably more important schemes:

There were several "super heavy tank" designs being planned, with the Maus being most advanced, they actually had built two prototypes of this by the end of the war.

However, the Maus is nothing compared to these behemoths!

The above were only at the fairly early stages of planning.

There were plans for a super-heavy battleship, the H Class that would be around 140,000 tons with 20 inch guns that would dwarf the Yamato, two keels were laid down but soon scrapped.

There were many other plans, guided missiles, super-guns, helicopters to name a few, it's a very interesting subject with plenty of information on the internet.

There are other more conspiracy theory types of weapons that I won't go into here, but if you search for Hitlers Bell (Die Glocke) you'll find one example.

German physicist tried to build an atomic bomb, at least there were experiments.

Another (more popular) article. I added a rough translation.

The German scientiste were astonished, when the heard about the exposion of the US-bomb in Hiroshima

The sientist say, they only wanted to build a "power machine". But newer researches give an indication of plans to build atomic bomb.

The nearest and biggest threat to the allies, had it made it into combat, was the Horten Ho-229 flying wing fighter, and the 6 engine heavy bomber that was being designed for bombing campaigns against the American east coast.
http://en.wikipedia.org/wiki/Horten_Ho_229
Had it made it into production in numbers, it could have changed the balance of power in the air. Of course on its own it would likely not have changed the outcome of the war, it was far too late for that.

It depends on what you see as a super-weapon.

In the fighter aircraft arena, by the end of the war Germany already had the Me 262 twin engine jet fighter and the Me 163 rocket powered fighter in service. It must be said that the Me 163 was not particularly effective.

Another advanced desiagn was the Lippisch P.13a ramjet delta wing interceptor, which never got off the drawing board.

None of these reached production.

The Germans were working on an atomic bomb. But the effort was stymied for a couple reaons.

During WW2 the Germans were also working on a transatlantic cruise missile using a mixture of coal dust, diesel and Acetone.

Tests were performed with such ramjet engines atop a Dornier 217 aircraft in France through the war. 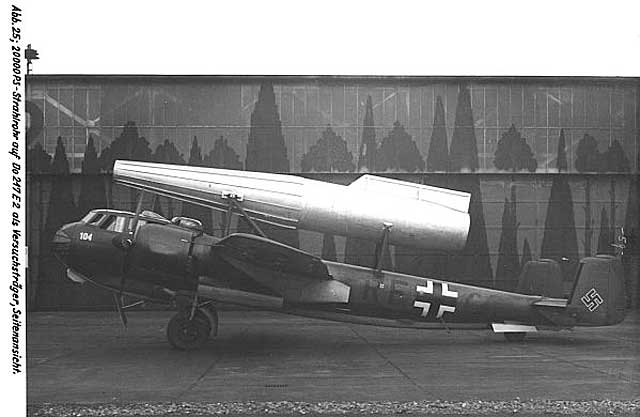 Trommsdorff-D-6000-Interkontinentalflugkörper was intended to launch from high altitude bombers such as the He-277 at altitudes of 46,000ft and 0.67 Mach. After launch they would climb to 80,000ft flying at 2.8 Mach much like the SR-71 cruise altitude. They would continue their flights to USA as robots similar in concept to the V-1.

"The V2 & the German, Russian and American Rocket Program"p.89, by Claus Reuter

It's high underwater speed and endurance meant it could move faster than surface ships could hunt it.

However, the XXI was plagued with development difficulties, and only one made it to an actual war patrol, in the last week of the war.

The design was so advanced that the Soviets used it as the basis for their Whiskey class diesel-electric submarines, and the XXI hull design was used for the first nuclear sub, the USS Nautilus.

But, even that had problems. Dr John Craven was tasked with studying the Nautilus, and reports in his book The Silent War, that it had serious cavitation problems with its ballast tanks when traveling at speed under water, so much so that the cavitation was tearing the outer hull apart. The USN was able to solve that problem, and eventually went to a teardrop shape that was even more efficient than the XXI design.

Would the XXI have reversed the battle of the Atlantic, had it been available in sufficient numbers? Probably not. Late in the war, the Allies were relying more on aircraft launched from baby carriers and the FIDO homing torpedo to attack German submarines. As fast as the XXI was, it wasn't faster than an aircraft or a torpedo. The XXI would have caused problems for a few months before they would have been countered by new Allied tactics.

In the end, the super weapons had little effect on the outcome of the war, and probably were a drawback, as they consumed resources out of proportion to the results they returned.

WW2 was essentially a war of attrition and supply, one that the US and USSR, with their vast resources of materials and people, would inevitably win.

This was detailed in a Magic decrypt held in NSA archives known as "Stockholm to Tokyo, No. 232.9 December 1944 (War Department), RG 457, declassified October 1, 1978. It was sent by the Japanese embassy in Stockholm decrypted on 12 December 1944. It refers to German development of a 5 kilogram nuclear warhead.

This signal states in part that:

The German atom-splitting device is the Neuman disintegrator. Enormous energy is directed into the central part of the atom and this generates an atomic pressure of several tens of thousands of tons per square inch. This device can split the relatively unstable atoms of such elements as uranium. Moreover, it brings into being a store of explosive atomic energy.... That is, a bomb deriving its force from the release of atomic energy. 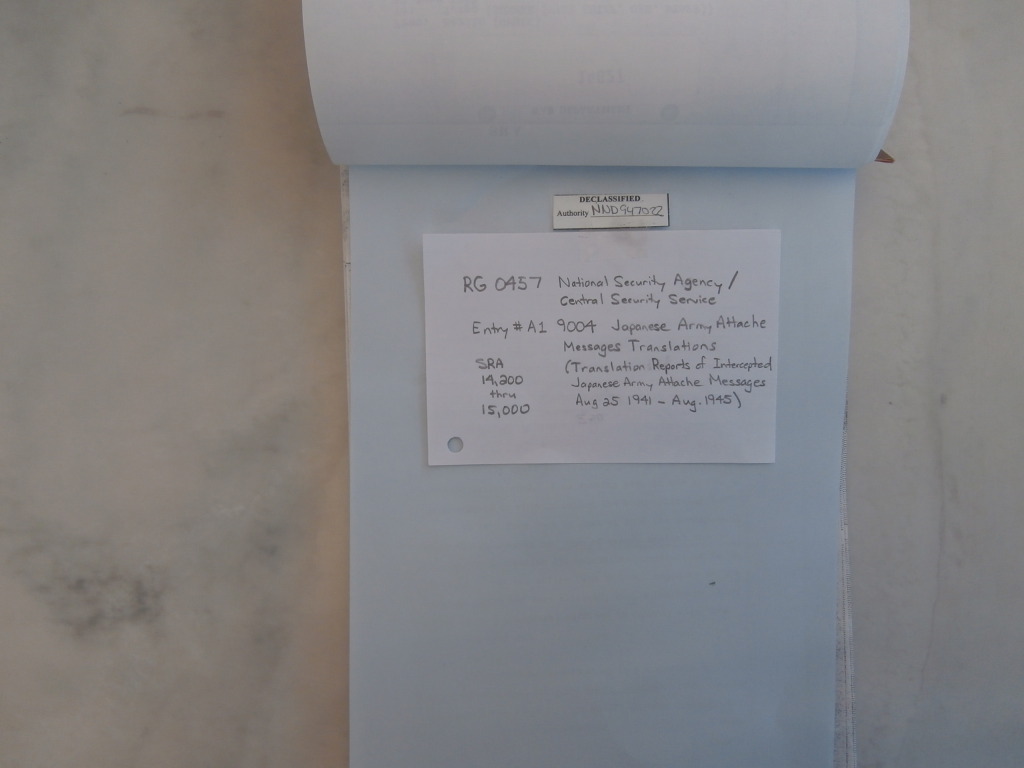 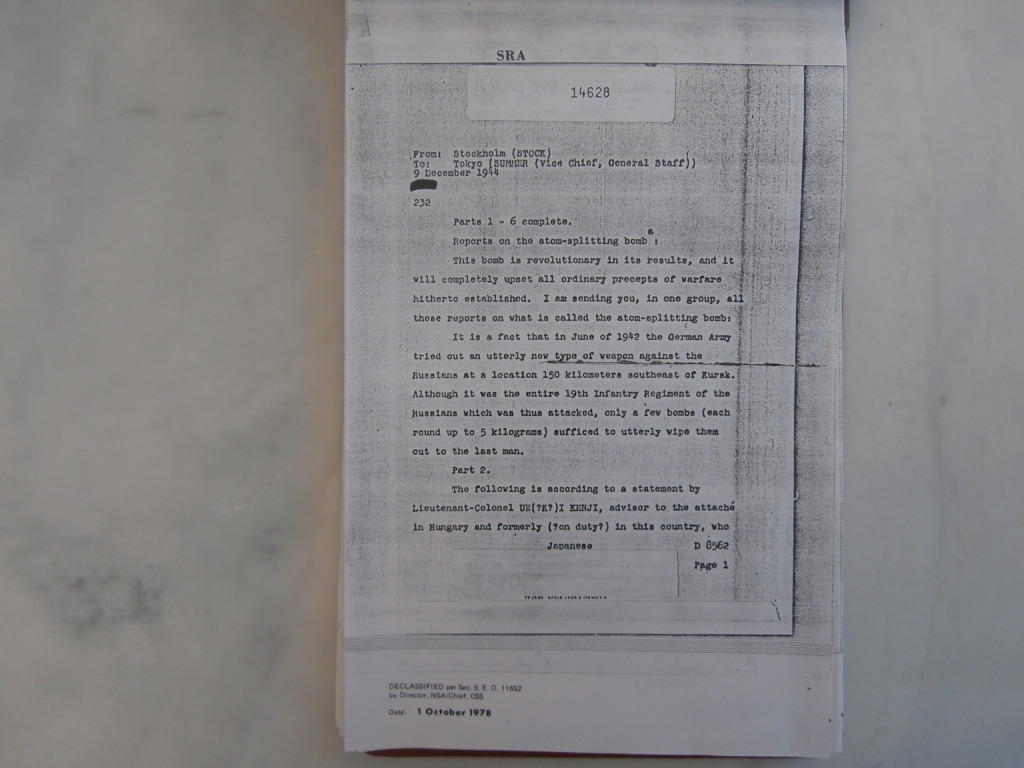 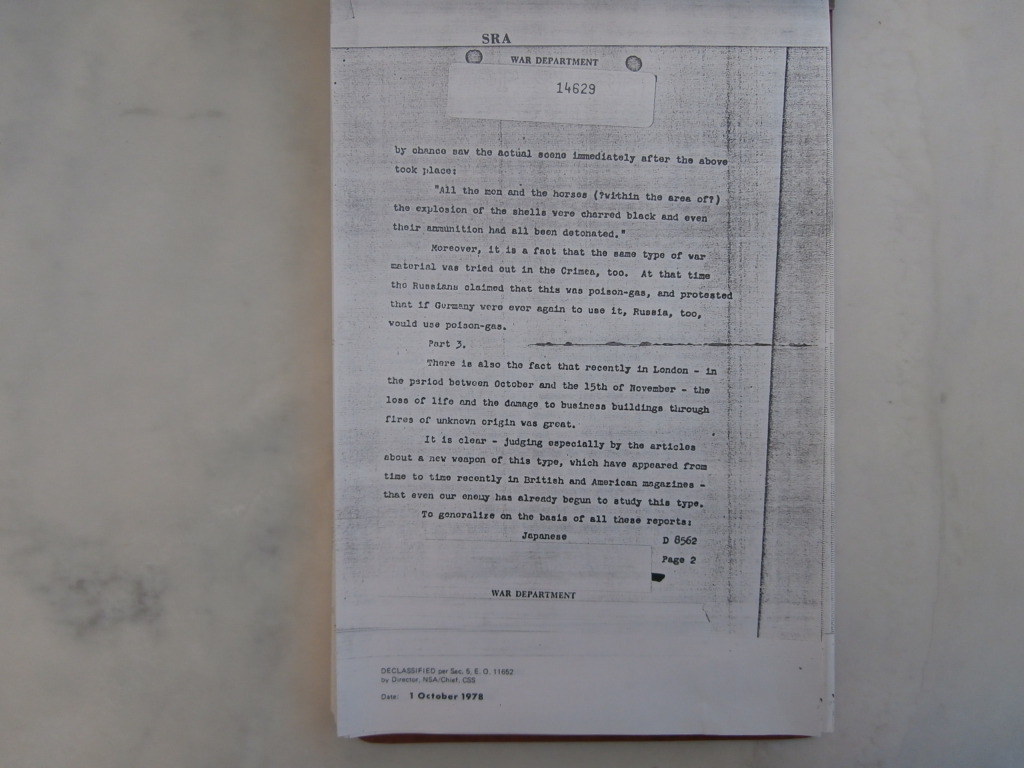 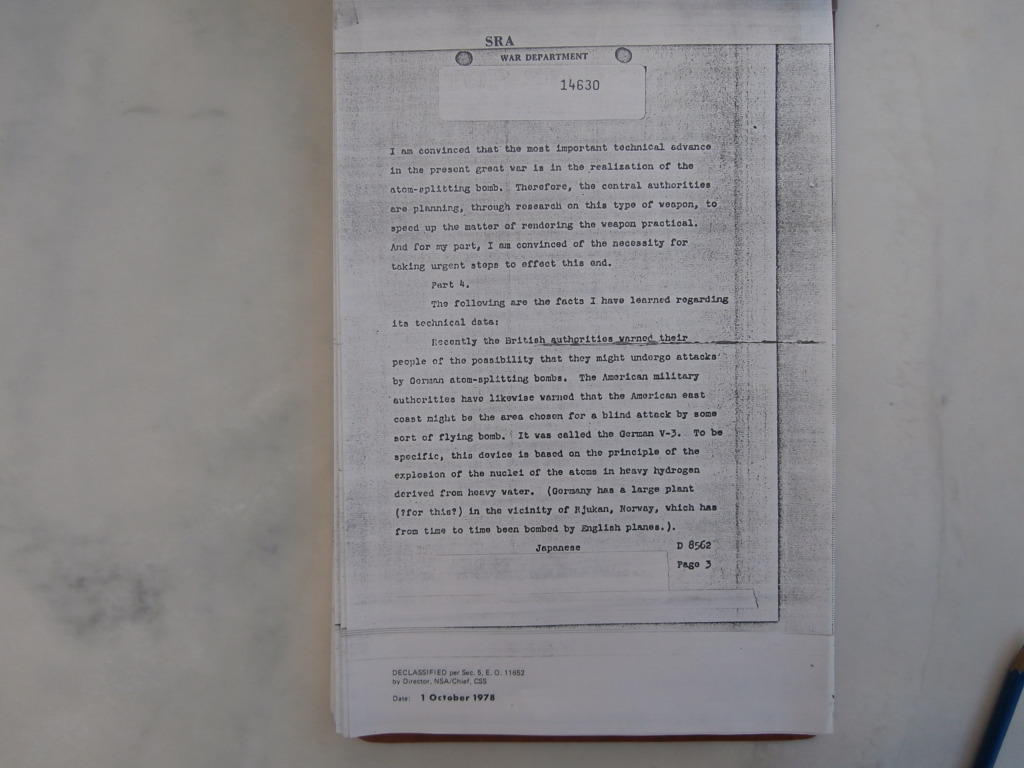 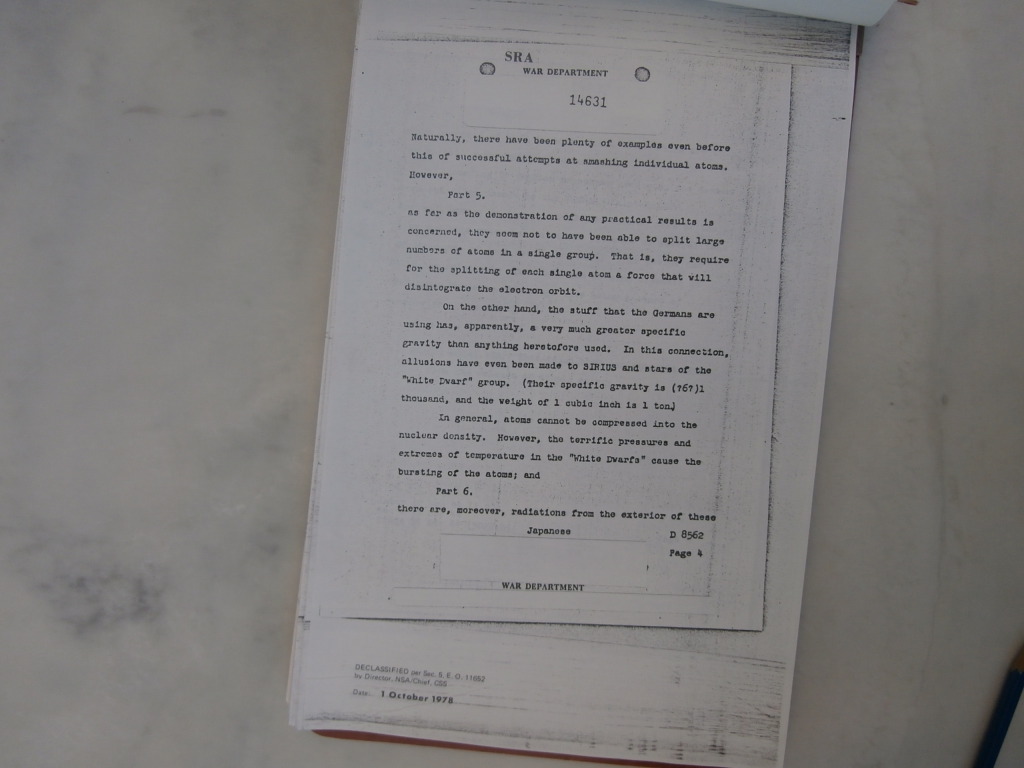 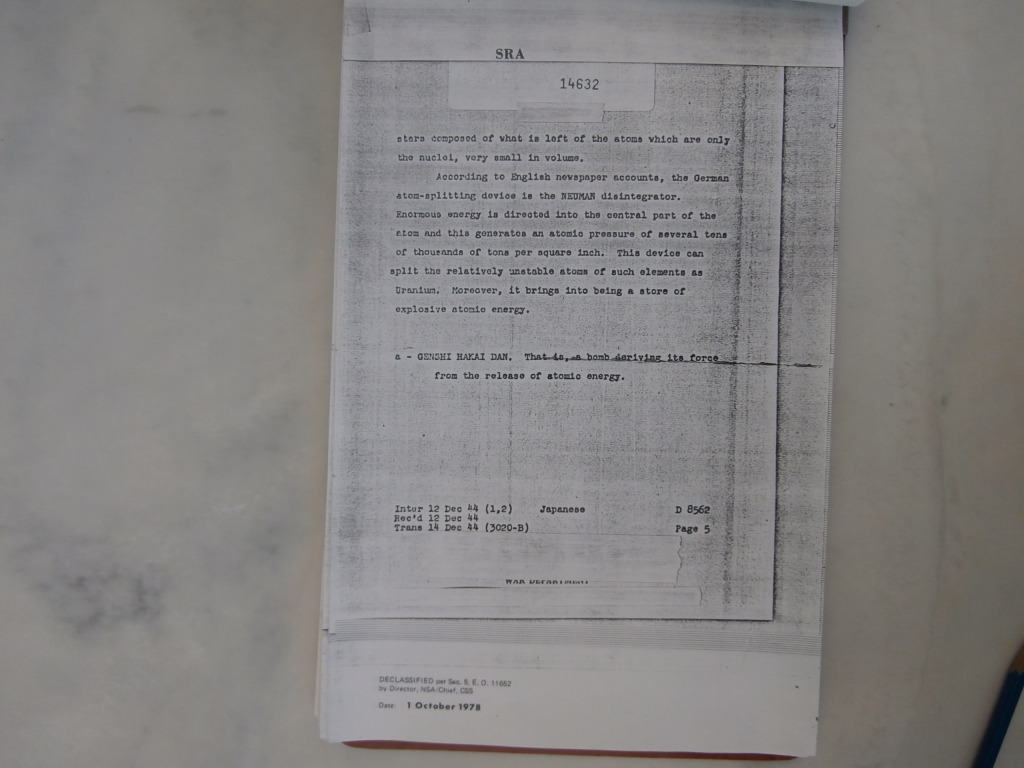 In another document prepared at the end of the war from interrogations of interned combatants by the US Naval Technical Mission Europe, cited as: “Investigations, Research, Developments and Practical Use of the German Atomic Bomb” dated 19 August 1945.

In that document there was an affidavit actually written by an interpreter Captain Helenes T Freiberger of the testimony given under interrogation by pilot observer Hauptman Hans Zinsser who said:

At the beginning of October 1944, I flew from Ludwigslust (south of Luebeck) [to] about 12 to 15 km from an atomic bomb test station, when I noticed a strong, bright illumination of the whole atmosphere, lasting about 2 seconds.

The clearly visible pressure wave escaped the approaching and following cloud formed by the explosion. This wave had a diameter of about 1 km when it became visible and the colour of the cloud changed frequently. It became dotted after a short period of darkness with all sorts of light spots, which were, in contrast to normal explosions, of a pale blue colour.

After about ten seconds the sharp outlines of the explosion disappeared, then the cloud began to take on a lighter colour, against the sky covered with a grey overcast. The diameter of the still visible pressure wave was at least 9000 metres (9km) while remaining visible for at least 15 seconds.

Personal observations of the colours of the explosion cloud found an almost blue-violet shade. During this manifestation reddish-coloured rims were to be seen, changing to a dirty-like shade in very rapid succession.

The combustion was lightly felt from my observation plane in the form of pulling and pushing. The appearance of atmospheric disturbance lasted about ten seconds, without perceivable climax.

About an hour later I started with an He-111 (aircraft) from the A/D at Ludwigslust and flew in an easterly direction. Shortly after the start I passed through almost complete overcast (between 3,000 and 4,000 meter altitude). A cloud shaped like a mushroom with turbulent billowing sections (at about 7,000 meter altitude) stood, without any seeming connections, over the spot where the explosion took place. Strong electrical disturbances and the impossibility to continue radio communication as by lightning, turned up.

In Chapter 14 of that document it states this:

The German scientists behind this 5kg warhead were Haxel, Schumann & Trinks. What they developed was a method for detonating sub critical fissile mass by a process known as Fusion boosted Fission. It uses the plasma Pinch concept to ignite a mass of uranium far below the critical mass by using nuclear fusion to replicate the neutron flux required in a fissile mass at criticality. 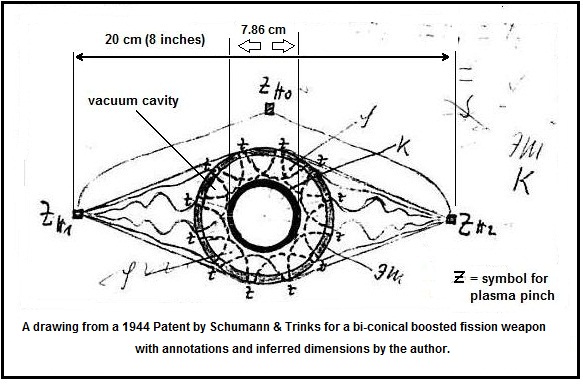 In order to create fusion two opposing Hollow charges with conical Lithium liners were fired at a small mass of Uranium coated with Lithium-Deuteride plus a 2% contamination of Boron to slow down the reaction.

When conventional chemical explosive charges smashed the molten lithium liners into the Deuteride nuclear fusion occurred, expressing a vast nuclear flux. This worked like a spark plug to ignite the Uranium.

Maj General Dornberger leader of the V-2 project was interned in a special camp after the war for senior staff officers where all the rooms were bugged with hidden microphones. Transcript summaries of his conversations between 2-7 August 1945 were used in evidence at Nuremberg. Although heavily censored after the trials the report suggests Germany planned to use 5kg tactical nuclear weapons on the V-2 and also on the Rheinbote missile (mounted on an 88mm gun) 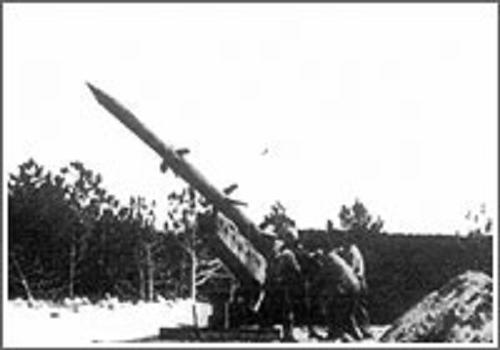 According to a wartime report held on microfilm file at Maxwell AFB, Alabama, S.R.A.4394, the US 9th Army captured a working German Atomic bomb on 26 April 1945 near Goslar. The device known as 76-Zentner weighed 3.8 tons and the document notes it was flown back to the United States by Col Charles Lindbergh who in addition to being a qualified B-24 pilot was also a consultant to the US Navy Technical Mission Europe.

During 1945 Allied advances overran underground factories housing at least 60+ Anschutz Mark IIIB Uranium centrifuges each capable of enriching 250grams of Uranium by 7% per 24 hours. During each 12 day cycle these could produce 15kg of HEU enriched to 80% U235. At this rate Germany was capable during the second half of 1944 of producing enough HEU for one Hiroshima type bomb every 7 weeks.

Not the answer you're looking for? Browse other questions tagged world-war-two military nazi-germany weapons or ask your own question.

12
What other war crimes trials, besides those of Nazi war criminals, were held after WWII?
8
Was Japan really part of the Axis?
14
Why did the Germans fall behind the Americans in the development of the atomic bomb after an initial lead?
10
How were middle ranking Nazis known to the allies before the end of the war?
8
What is the most noteworthy defection of a member of the Nazi party to the Allies during WWII?
22
What were the EMP effects, if any, of the atomic bombing of Hiroshima and Nagasaki?
8
What was Nazi Germany's end goal?
21
Why did other German political parties disband so fast when Hitler was appointed chancellor?
6
What percentage of the Nazis were highly educated men?