Why do some playing cards have only one eye?

At some point, playing cards graduated from having wildly varying designs to having a standard design. Kings of Hearts are now "suicide kings," because of the sword behind their head, and Jacks of Spades and Hearts are "one eyed jacks."

The only way to get those nicknames is standardized imagery. Well, not standardized exactly, designs will still vary, there's still a lot of art to card design--just google image search for "King of Hearts" to see the variety, but certain common features like the pose will remain fixed across many decks.

So how and when did card faces essentially turn into heraldry?

What determined why some of them were drawn in profile (one-eyed) rather than portrait?

The design commonly used in American cards today is derived ultimately from French decks going back to the Renaissance. The earliest common American interpretation was by an artist named John Cazenave about 1800 about whom little is known. His designs were improved and much more widely printed by Charles Bartlett circa 1830. Then, around 1850, Samuel Hart of Philadelphia started publishing a lot of cards. Below is a Hart design: 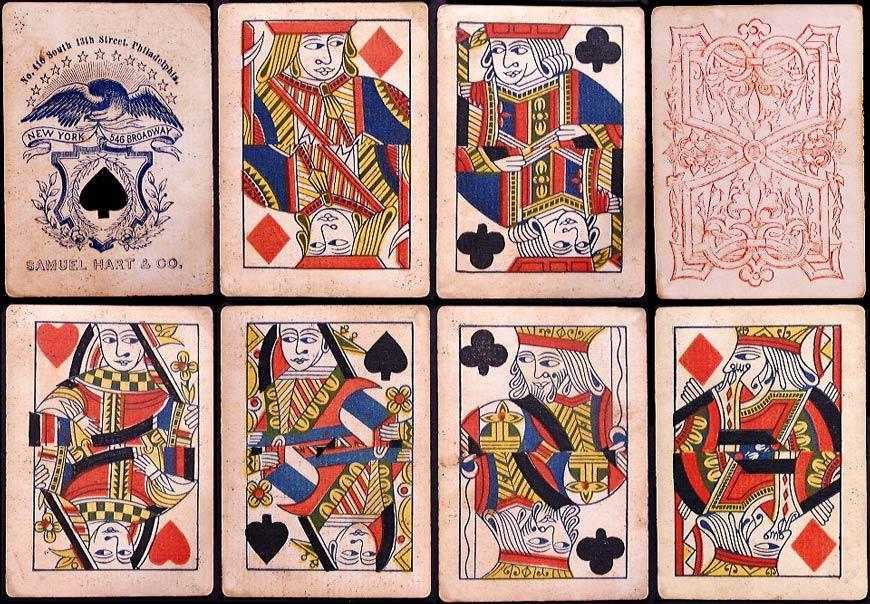 As you can see, it is pretty close to the modern design, but not quite sword-through-the-head. The first full modern design having all the elements we know today was probably the Steamboat 999 deck which was first printed in 1883 and was published in vast numbers at a cheap price, making the design a permanent standard.

The portraits are stylized (including the number of eyes showing) to make each suit look different and distinctive.

Not the answer you're looking for? Browse other questions tagged everyday-life game or ask your own question.

10
Why are some amphoras pointed on the bottom?