Did archers lay on their back to draw bows?

I saw a movie called "The Hero" from 2002. I know the movie has a lot of artistic scenes, and less to do with reality. In one scene, many of the Chinese archers laid on the ground and used a big composite looking bow. 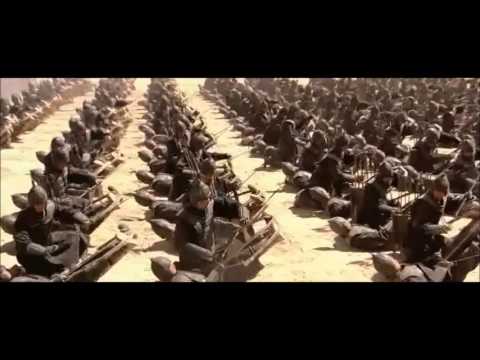 So far I have found no evidence on this kind of archery, but as a practicing archer I see some sense of this method. First of all, if you use your full body strength with two hands, it could significantly increase the force without investing heavy equipment. Since archers in an army aren't concerned with precise shooting as much as causing heavy damage by shooting an area, the method would make some sense. As I tried to search on the topic, it seems to be fiction. Does anybody know of any source mentioning these kinds of bowmen?

It's a variant of the belt claw technique of arming crossbows. Possible reasons include extended range due to a greater pull and presenting a smaller target profile for opposing crossbowmen.

Bear in mind that military techniques varied throughout Chinese history, and that much of current theory is based on conjecture. Here's what we do know:

That's it. While there are a number of texts depicting military strategy, there are no surviving manuals depicting the nuts and bolts (pun intended) of military technique from the period. Much of what we do know of the armies of the Warring States was gleaned from the accounts of Sima Qian's Shiji, which gave only cursory mention to military technique, and from archeological finds from the Terracotta Army at Xian, which is akin to looking at a cup and guessing that I used it to drink coffee when I was really drinking whiskey.

The only evidence that shows that this version of the belt claw technique was used during the Warring States period is the record of the same technique being used during the Song dynasty, which arose more than one thousand years later, and the remains of similar equipment found with the Terracotta Army.

Found this image, I can't find one of it being fired, but you can see they definitely work in teams to load over-sized crossbows.

Not the answer you're looking for? Browse other questions tagged ancient-history china warfare weapons or ask your own question.

5
What effect did tanks have on warfare strategies upon their introduction?
17
How did ancient armies keep the route of supplies to their battlefield?
27
Why did the clocks go back in Shanghai on December 31, 1927?
37
Did archers synchronize fire? Why?
13
Where did the French revolutionists get their weapons?
12
Did any age of sail ship have a "back-bone cannon"?
23
Did Henry V’s archers at Agincourt fight with no pants / breeches on because of dysentery?
9
Did the Portuguese get anything in return when they handed back Macau?
26
How did archers judge distance before range finders?
3
Did medieval armies cultivate resources during their campaigns?