What is the symbolism behind the Sauser family crest from Sigriswil, Switzerland?

I received a letter that included a photo copy of an old b&w photo of this medallion or sign with no explanation of what it is or what it was used.

I understand it is something that was originally from Sigriswil Switzerland near Interlaken. I have no idea if it still exists and I do not know the dimensions or coloring (if any) of the original object. Also, I cannot tell why many bands cross the outer ring of the object to connect to the outer chain, which may help someone date it.

I have a strong belief that across the top is the family name "Sauser", and they are known to have been present in the community and had been for hundreds of years. The community name of Sigriswil Switzerland is shown across the bottom.

I understand the grape ring is symbolic of the wine production for the area. I have read that clovers may be a reference to the Christianizing of the area by Irish monks (Beatus of Lungern). In a Sauser family origins story I have seen the Eiger, Mönch, and Jungrau mountains referred to at least once.

I searched for some of the keywords and crests, medallions, and coats of arms, but I have not found anything similar looking yet. I have a high degree of skepticism that a family would have a coat of arms or symbol unless they had a practical purpose for one.

One theory proposed to me, besides it potentially just being a family crest, is that it was a military unit symbol for a local militia or mercenary group, but at face value it does not appear to me to be that old, but I could be wrong.

My question is the following:

What would the purpose of such a medallion or symbol (i.e. military mymbol, brand even?), and what is the symbolism of the shield and the "1" or "7" depicted? 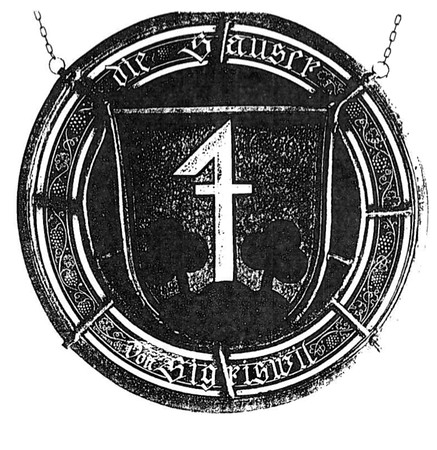 It does appear to be the Sauser family crest. Here are some colour versions: 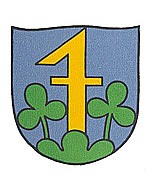 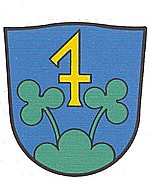 As you can see, the design consists of two trefoils (i.e. clovers), growing from a trimount (i.e. a mount of three hillocks), on a blue blackground. The crossed-seven-esque sign in gold appears to be a hausmarke.

The trefoils are a symbol for perpetuity. As a side note, green shamrocks are also symbol device of Ireland (often depicted with heart-shaped petals). While not the case here, they are particularly common in the crests of emigrant Irish families, symbolising their ancestral home.

The trimount straightforwardly represents three mountains, and has also been interpreted to symbolise the Holy Trinity. It is a relatively common element in Swiss heraldry, which may represent Mont Blanc, the Eiger, and the Matterhorn. But the design is also found in the rest of Europe, for instance on the arms of Slovakia where it symbolises the Tatra, the Fatra, and the Mátra.

In fact, the arms of Sigriswil, where the family was in, also features the trimount:

Coats of arms was essentially a form of personal or family identification.It was generally a mark of the nobility, but can also be granted without ennoblement or freely assumed. In the latter cases it might represent a luxury or a higher social status than peasants. Specifically, in Switzerland, just about everyone possessed arms.

Nearly every bourgeois and farming family in Switzerland seems to have a coat of arms.

16
What does the eighth samurai crest / symbol in this picture signify?
6
What is the meaning of this samurai crest?
9
What does this Samurai crest mean?
2
Did Tirol annex land (right flank of Val d'Avigna) from Switzerland between 1859 and 1869?
1
Inter-ethnic conflicts in Switzerland in the 16th century
5
Does the rule of tincture apply within a variation of the field?
2
Why were the Istein and Schliengen enclaves transferred from Switzerland to Baden?
5
Can anyone identify what uniform this child soldier from Switzerland c1870 is wearing?
9
Is this costume plate from Theatrum Orbis Terrarum correctly colored?