I've been fascinated by the discovery of the Indo-European origin of the mummies in the Tarim basin. This article says:

The new finds are also forcing a reexamination of old Chinese books that describe historical or legendary figures of great height, with deep-set blue or green eyes, long noses, full beards, and red or blond hair. Scholars have traditionally scoffed at these accounts, but it now seems that they may be accurate.

Which Chinese figures supposedly had these European features? In which works do they appear? For example, Cao Cao in The Romance of the Three Kingdoms wouldn't have these features because he was Han (if I understood correctly). But who did?

First off, it really shouldn't shock anyone that some ancient mummies in the Tarim Basin show European-esque features. That is the far, far western extreme of what is now considered China. Until as late as the middle ages (6th-8th century AD) an Indo-European language was spoken there. It really shouldn't be surprising that an area whose culture left behind Indo-European writing and artifacts also left behind human remains that looked a bit like Europeans. So the reasonable assumption is that those mummies were Tocharians.

There are some other non Indo-European people in East (not Central) Asia with some seemingly "European" features, but by and large they are isolated groups who are not particularly historically important. Among the most intriguing (to me at least) are the Ainu, whose historical range is shown below. They have a lot of superficial resemblances to Europeans (although not in hair color), but are apparently not genetically related at all. Their language is an isolate. 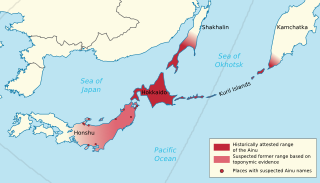 I'm not clear what your question is exactly. I believe it's were some of the blue-eyed or pale characters in Chinese legend based real people of European origin.

Pale skin and blue eyes aren't exclusively European. Kafiristan is an example of somewhere which has blue-eyed people. While living in Kazakhstan I once met someone (an ethnic Kazakh, not a Russian) who had ginger hair.

Not the answer you're looking for? Browse other questions tagged ancient-china archaeology prehistory migration or ask your own question.

8
How historical are early Chinese (Shang dynasty and earlier) dynastic records?
11
How were Chinese Dynasties named?
6
What caused women to lose their access to resources and become a part of men's possessions with the start of the agriculture era?
3
Why didn't the Chinese repeating crossbow dominate?
2
Why have eunuchs been so influential in Chinese history?
5
Do indigenous Latin Americans share any common “recent” ancestors with the Chinese?
42
Did Chinese emperors wear a rectangular hat with suspended gems?
11
What is the meaning of the cross on a Chinese bronze Gu Chalice?