Flag of Paris: Why blue and red?

The flag of Paris is blue and red.

I have heard that blue identified with Saint Martin, and red with Saint Denis, but the Wikipedia pages of these two saints do not mention these colours, so I have doubts. 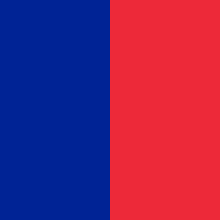 Answer with the most solid references win.

The association with saints is probably correct. Red and blue were indeed respectively the colours of Saint Denis and Saint Martin.

The early history of the French flag is lost in obscurity, and it is not always easy to trace the various modifications that it has undergone. At the earliest date of which we have record we find the kings of the Franks marshaling their forces under the plain blue flag known as the Chape de St. Martin. Later on the red flag of St. Denis, known as the oriflamme, came into use, and was held in great popular esteem, until by the tenth century we find it accepted as the national flag.

- Hulme, Frederick Edward. The Flags of the World: Their History, Blazonry and Associations. Library of Alexandria, 1897.

Blue was long associated with Saint Martin. The ancient battle standard of France was (supposedly) the blue cope of Saint Martin, famously said to have been divided with a freezing beggar. Though known as the chape de saint-Martin, it likely wasn't so much clothing as it was the banner of his abbey. It might have been blue because that (and green) was the colour of confessors.

The ancient kings of France bore Saint Martin's blue hood or cap for their standard for six hundred years.

- Preble, George. Our Flag: Origin and Progress of the Flag of the United States of America. Albany: Jnel Munsell, 1872.

Red was similarly associated with Saint Denis. The flag of his abbey was a banner made of red silk, known as the oriflamme. During the High Middle Ages, this red flag superseded St. Martin's blue cope as the standard of the French Kings. Sources differ on what the banner looked like exactly (e.g., plain vs adorned), but it is agreed to be (more or less) a red banner.

Given their long tradition as national symbols, this seems quite plausible as an explanation for the Parisian livery colours. Charles VII later adopted the more familiarly coloured cornette blanche.

Not the answer you're looking for? Browse other questions tagged france flags paris or ask your own question.

6
Tricolore: Why have the colors been chosen that way?
12
What flag has a blue-grey background and an orange-outlined green cross?
16
Flag with 13 white stars and a crescent on red background
10
Can anyone explain why the Scottish flag on this map from 1504 has a red cross on a white background?
3
Why did Paris name a metro station and a street after Étienne Marcel?
6
What was the Hospitaller gonfalon like in the 12th and 13th centuries?
3
Why doesn’t Cuba's flag have any communist symbolism?
8
What regiment is this (~1826-1861) French cuirass cavalry uniform?
7
What was the persecuted group that was formally banned from leaving France?