How true to the originals are Che Guevara's published diaries?

I've been reading a few recently. They all have prologues that mention editing by his widow/daughter/Fidel, so I was wondering do we know how true they are to their original? Could it have been changed for political reasons (i.e. improve his relationship with Fidel)?

It seems in his Congo diary him and Fidel had major disagreements from almost the beginning of the mission, but their relationship seems to not be just cordial, but incredibly intimate/friendly. So are the originals public or do we only have access to the published versions?

Some editing of content was certainly done. His daughter admitted as much in a 2004 interview (translated to English here):

Since the 1980's, we - Che's family and others - have been working on his unpublished manuscripts. These were maintained as part of his personal archive, and in large part were and continue to be jealously guarded by my mother. To publish anything written by him that he himself did not intend for publication - as is the case with the notes that became "The Motorcycle Diaries" - serious editing work is required. We can't omit text, but at the same time we can't be completely sure he would have given his permission for the text to be published as it was originally written. That is why we have a commitment to edit what he wrote without changing what he meant - a very difficult task.

Perhaps sometime in the future when all his contemporaries are deceased, the unedited diaries will be allowed to pass into the care of some group that will allow outside historians access to them.

I don't know if there is any facsimile edition yet of any of the diaries but I assume that the Che Guevara Studies Center in La Habana (or Aleida?) holds the original copies and perhaps allows scholars to study them directly for comparison, which would reveal major discrepancies between source and edition. Moreover, in the 2006 edition of Reminiscences of the Cuban Revolutionary War: Authorised Edition with Corrections Made by Che Guevara (a recollection by Che based on his diaries, after the war) there are a few images showing printed pages from the original version that was edited by Che himself, for a republishment, as stated at the first page: 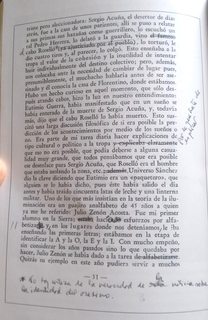 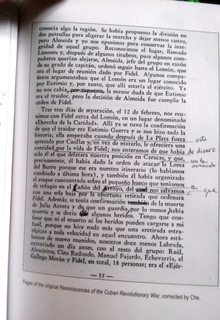 This might indicate (at least fot these two pages) that there were some editing, but mostly by the author himself.