Why was PTSD not written about as much before the 20th century?

As late as WW1 there was very little literature surrounding PTSD/'shellshock'. In fact, the term was not coined until the 1980's.

Considering the fact that warfare has been a part of human life since time immemorial, why is PTSD only being discussed about now? Did people of earlier eras not suffer PTSD as much since violence and death was a big part of their daily lives?

I believe this is as much sociological as medical. Terms such as 'shell shock' or 'battle fatigue' were used from at least WWI - it was believed that shelling actually 'shocked' the brain - but there was far less understanding of, or sympathy for, the effect war could have on men (women were not generally involved in actual combat). The term 'NMF' was placed on military records at least up to WWI, possibly WWII, meaning 'No Moral Fibre', when men cracked under pressure. In societies that depended crucially on men defending borders, lands, resources and women, it was imperative that failure to 'do your bit' was stigmatised - there is the famous exhortation of Spartan mothers to their sons to 'Come with your shield, or on it!'. Losing your shield almost certainly meant you had fled before the enemy, throwing away your shield to run faster, whilst being brought home with it, even dead, denoted courage, and 'Rule Britannia' written in 1740 included the words 'And manly hearts to guard the fair!'

Only in the 20th century, when the horrors of trench warfare could be photographed, and poets were brave enough to write about the realities of war, together with advances in the study of psychiatry, was the real effect of combat slowly recognised. Combat Stress, originally the Ex-servicemens Welfare Society, was founded in 1919, and was ahead of its time in this respect - men were shot during WWI for desertion or failure to obey orders, where nowadays they might well be hospitalised before they reached breaking point. http://www.combatstress.org.uk/about-us/history-of-combat-stress/

Western industrial societies rarely if ever now require their young men to fight to the death, and war has become more technological and impersonal - as much - or more - about skills and equipment as hand to hand combat and beating the other man's brains out. Thus, we can afford, as a society, to understand and accept the personal cost of war, rather than dismiss it as 'cowardice'.

The term PTSD was invented in the 1980s by the medical discipline of psychiatry.

The condition which the term PTSD refers to was well known to people from antiquity under various names with different meanings specific to those societies ( http://io9.com/5898560/from-irritable-heart-to-shellshock-how-post-traumatic-stress-became-a-disease ).

The matter is being discussed more now in particular, because the medical condition grants certain benefits and stigmas which previous accounts of the trauma of war didn't grant or stigmatise. We live in a society where discussion is common and discussion is used as a way to resolve or draw out conflicts; using people with what we call PTSD as pawns in social contests.

Previous discussions of the underlying trauma were discussed in the manners natural to those particular societies. Whether those people actually suffered PTSD is debateable: the definition didn't exist until recently, and aspects of the definition would be incomprehensible to earlier people. They used their own terms to socially and culturally explain what war trauma meant to them.

The symptoms of PTSD were first described by Herodotus when referring to Epizelus, a survivor of the 490BC Battle of Marathon, in his Histories 6.117.1-3:

It seems to me that the disease existed for years but lacked a name. During the Civil War, there was a malady known as Da Costa's syndrome which was a combination cardiac and anxiety syndrome connected to battle.

In World War II, PTSD was essentially documented by combat artist Thomas Lea in his painting "The Thousand-yard Stare," 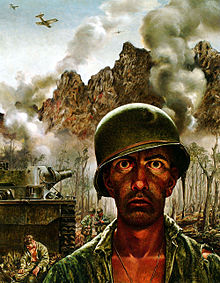 and also apparent in this photo of a Marine after two days of fighting at Eniwetok. 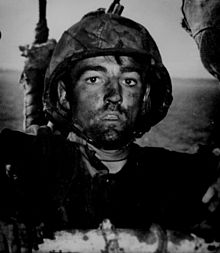 As other's have stated, part of the reason is that it's a medical term that's only been coined in recent history. The same is true with Autism, for instance. People have always had it, but it wasn't until the 60's that the term came into use to describe what we now know as Autism.

There's also another medical aspect to this as well and that's the fact that today, many more soldiers can survive horrific injuries on the battlefield. Those that are most affected by PTSD are likely those that have had to deal with the horrors of war on a higher level. 50 years ago, the likelihood of surviving these events on the battlefield was much less, so those most likely to be affected by PSTD also happened to be the least likely to return home.

In addition to other factors mentioned by Samuel Russel and TheHonRose, there might be one purely "technical" factor. I'm not an expert, I only came across this one article saying that there is evidence of actual brain damage from explosions:

The brains of some Iraq and Afghanistan combat veterans who survived blasts from improvised explosive devices (IEDs) and died later of other causes show a distinctive honeycomb pattern of broken and swollen nerve fibers throughout critical brain regions, including those that control executive function. The pattern is different from brain damage caused by car crashes, drug overdoses or collision sports, and may be the never-before-reported signature of blast injuries suffered by soldiers as far back as World War I.

There's a caveat though:

"When you look at a brain, you are looking at the life history of an individual, who may have a history of blasts, fighting, substance abuse or all of those," Koliatsos says. "If researchers could study survivors' brains at different times after a blast -- a week, a month, six months, one year, three years --that would be a significant step forward in figuring out what actually happens over time after a blast."

If corroborated by further research, this may lead to a conclusion that by WWI artillery became powerful enough to inflict brain damage that could not go unnoticed.

In olden days, there was very little toleration for queasiness or mental instability under fire. For example, this is a quote from a British military manual published in 1804:

The cowardice, or irregular behaviour of one or two men, is enough to put a whole battalion in danger. A soldier that quits his rank, or offers to fly, is to be instantly put to death by the officer who commands the platoon, or by the officer or serjeant in the rear of the platoon.

Most countries had laws making it a capital crime to draw back or show cowardice in battle. For example, in the military acts enacted by George II, any kind of failure to "engage the enemy" was punishable by death. In some cases soldiers would be discharged if they were judged to be "insane". So, if your "PTSD" manifested itself in battle, you could count on being killed right then and there, but if it only showed up later during peace, you might just get discharged.

In the Civil War period, PTSD was often conflated with "demoralization" and this word was widely used in the 20th century as well. Soldiers that were permanently demoralized were typically deemed to be "insane" and committed to asylums. Here is a ledger from the Civil War showing expenses for transporting "insane" soldiers: 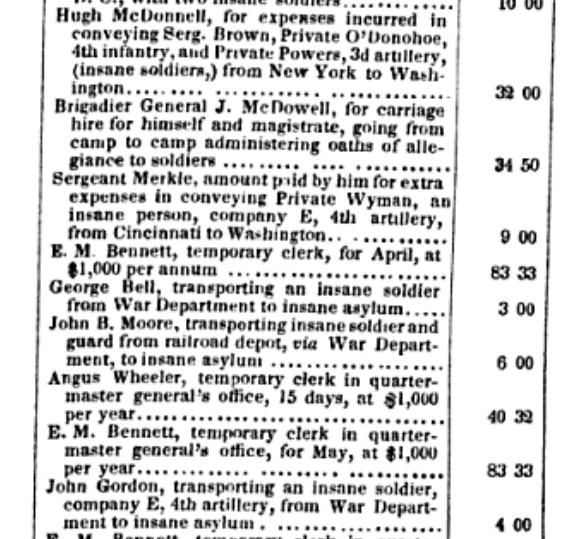 While the term is certainly new, I think most American high school children have read one of the most famous accounts of what would now be called PTSD after WWI.

That novel is All Quiet on the Western Front by Erich Maria Remarque, and details one soldier's life in and out of the war. He displays many of the common syptoms of PTSD - inability to reintegrate with civilian life during his leave, inability to discuss his experiences with others, eventual inability to cope with the loss of his fellow soldiers, despair, and welcoming death.

The preface also notes this (via Wikipedia):

[All Quiet on the Western Front] will try simply to tell of a generation of men who, even though they may have escaped its shells, were destroyed by the war.

That stress, specifically the hormones released in response to stress, actually kills neurons I think was first demonstrated by Sapolsky within the past 30 years or so. Needless to say, before the 20th century when even insulin and various vitamins were not understood, such hormones were far beyond the understanding of medical science and even today many see psychosomatic illness as "imaginary" -- Just snap out of it, soldier! Also, higher death rates in the past due to inferior medical treatment limited the sample size and perhaps something about the continuous bombardments that modern technology allowed induced PTSD at rates not seen in previous wars.

I have had a theory for the last couple of years. Of course I'm not a Dr.(only play one on tv). I am a Marine Corps combat veteran and suffer from some PTSD. I have been told that I have night terrors accompanied with throwing punches into the air. On my end of the event, I am having a dream that I am back in the Corps and my unit is involved in a firefight or some sort of skirmish but I can't find a weapon to help in the fight. I still get adrenaline rushes if I hear a helicopter in the distance or one is flying around nearby. It doesn't happen all the time, only certain types of helos and there is a certain sound that the propellers make.

Back to my theory. I think a large amount of those who are in the military today (joined within the last 10-15 years) are more of the "video game" generation? So many of the people who play the shooter games like Call of Duty, that immerse the player in combat scenarios become desensitized, or think they can handle real life combat. When they are actually placed in a combat environment, it affects them in a horrible way. On top of that, the length of the tours our troops are having to endure. I'm not sure but didn't they have better rotations during the Vietnam conflict.

Of course there is the fact that PTSD isn't just an illness related to combat anymore. Any traumatic event can cause it.

Not the answer you're looking for? Browse other questions tagged warfare medicine cultural-history or ask your own question.

24
Japan is known for being isolationist, so what cultivated its history of interventionism in the 20th century?
11
What factors contributed to the popularity of Eastern cultures in the USA in late 20th century?
13
What was it like to have type 1 diabetes in the early 20th century?
7
Why was health insurance not included in the Social Security Act of 1935?
6
Why were rockets not popular as part of artillery until 20th century?
7
Why did the line infantry not use shields in the 18th century?
9
Who are the 20th century painters on this t-shirt?
0
Was the sprouting of seeds for food production known in Europe before 1800?
6
How much did the western world know about the Soviet Union pre-WWII?
7
Why there is no Islamic architecture with glass in windows before 18th century?