How common was it for people to live 80+ years in the 17th century?

I was studying music and saw in a music score sheet that Tomaso Albinoni lived 80 years. I know that long before that people had lived to that age. I would like to know just how common that was. Did people back then see those people as we see people with 100+ years today?

Actuarial science was just getting started in the 17th century, so we can answer this question with some specificity--for London and Breslow, anyway.

John Graunt made the following life table for London in 1662 (source):

Around 1% of Londoners were older than 77. 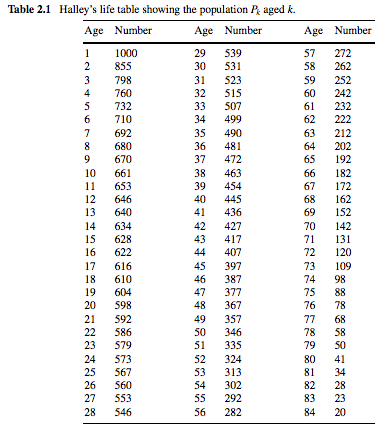 All told, around .75% of Breslau's population was over 80. This is similar enough to Graunt's table that these tables are taken to be roughly representative of northern European cities at the time.

In the contemporary American population, 3.6% of the population is over 80 and .1% of the population is aged 95 to 99. So to address your final point, living to 80 in the 17th century was more like living to 90 today. But like @Semaphore points out above, these stats aren't directly comparable because mortality was more concentrated in childhood than it is now. Anyone who wants to calculate life expectancy at age 21 in 1693 and compare to the same in 2010 is more than welcome to.

The whole "people died young" thing is somewhat exaggerated. First of all, before 1800 there was less of a focus on age in general, although in 19th century in the United States this tendency reversed and became almost technical. For example, in the 1870-1900 period you can often find death notices that say things like so-and-so lived for 64 years, 4 months and 5 days.

In the old days people ate a lot less and exercised more, which are healthy tendencies. If you avoided common causes of death, like childbirth, you could easily live to be old. Living a long time is more a function of bodily quality and integrity than medical intervention. If you visit 90-year-olds in nursing homes you will find that they rarely go to the doctor. People who require medical assistance tend to be the ones that die young. The doctors never even see the long-lived.

Not the answer you're looking for? Browse other questions tagged 17th-century demography or ask your own question.

8
Robert Hookes Diary - Why would he have bought and drunk Vomit?
12
How was the dynamics of a naval battle in the 17th century?
16
Did the syphilis epidemic start the 16th and 17th century wig craze?
12
Purpose of Guinea in British monetary history
6
What was the estimated population of the Mississippi Valley before contact with Europeans?
2
Thoroughbred horse history on British Islands prior to 1686
35
Did people use to marry much younger during the last millennium?
5
Do we have any authentic Native American flute music from the 18th century or earlier?