Was there any time in non-recent history where it was fashionable to wear ripped clothes?

For around past 30 years it's popular to wear ripped jeans. Was there anything similar in history, when ripped or otherwise heavily worn clothes were popular and considered fashionable?

Switzerland, and the Germanies, 1500s and 1600s in the form of the Landsknecht who were given a legal dispensation from the sumptuary (clothing) laws to be so fabulous. There is a contemporary recreation community who have some colour pictures of recreated clothes draped on people, and a wide variety of pictures online, including some colour prints from later. 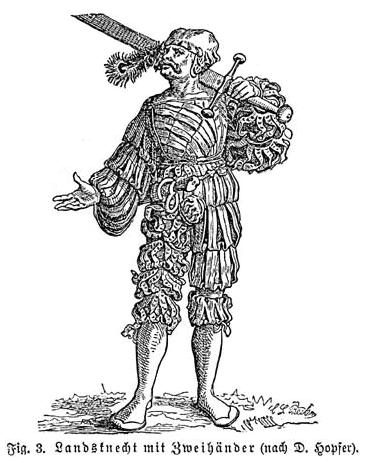 What made the Landsknechte so conspicuous was their elaborate dress, which they adopted from the Swiss, but later took to even more dramatic excess. Maximilian I exempted them from the prevalent sumptuary laws as an acknowledgement of their "...short and brutish" lives. Doublets (German: Wams), deliberately slashed at the front, back and sleeves with shirts and other wear pulled through to form puffs of different-colored fabric, so-called puffed and slashed; particoloured hose (or Gesses); jerkins (German: Lederwams); ever-broader flat beret-type hats (German: Tellerbarrets) with tall feathers; and broad flat shoes, made them bodies of men that could not be mistaken.

Jules-Amédée Barbey d'Aurevilly, in Du Dandysme et de Georges Brummel (The Anatomy of Dandyism, 1845) claims that French dandies of his day used to use a piece of broken glass to shave down the fabric of their coats until they were almost sheer, and might break through. If you want to believe him. I don't consider him very reliable, especially since a lined jacket isn't going to work like this.

5
What was normal attire for Hindu kings in the 15th century?
19
How were small swords worn in the 18th century?
4
Is there any historical basis for the red/white color scheme of the Assassins?
5
Has there been any culture where men typically have longer hair than women?
2
"Hat Hair" in History
3
What role did 17th c. luxury manufacturing play in the industrialization?
3
Did the Canadian Tuxedo emerge out of the Wool Shortage of 1973?
6
Did ninjas ever use a costume like the one we usually see in films?
6
When and where did people first start wearing underpants?
3
Why would 19th century parents make their babies wear stiffened bodices?