Why was the area now known as Liberia chosen as the location for repatriation of African slaves in the US?

The American Colonization Society thought that colonizing Africa for the purpose of returning US slaves to Africa was the solution to slavery problems. Why, and how, did they come to decide that the area now known as Liberia was the ideal choice for such an endeavor? Was it because most US slaves came from west Africa?

Liberia is near the Ivory Coast and the Gold Coast (Ghana) that was the center of the slave trade. But it was a piece of relatively uninhabited land near the other two.

"Freed" slaves came from two sources. 1) Slaves that were freed in the United States and sent to Liberia, and 2) Slaves that were "intercepted" and freed coming from the Ivory and Gold Coasts. Because of its location on the western "corner" of Africa, Liberia was ideal for placing both sets of freeman.

The initial plan was for somewhere close to Freetown, Sierra Leone, where the British had already resettled freed slaves with (it was perceived) some success.

The area now known as Liberia was only chosen after this and other options, for various reasons detailed below (e.g. unsuitable for settlement, reluctance of local peoples to sell land), were abandoned.

Proposals to create a colony for emancipated slaves pre-date the first settlement in what is now Liberia by some 50 years and came from both blacks and whites, though for very different reasons.

merits of a separate black nation as a means of escaping white prejudice. In 1773, four slaves in Massachusetts petitioned the colonial legislature for a gradual emancipation plan, promising to remove themselves to Africa once freed.

Samuel Hopkins, of the First Congregational Church in Rhode Island, suggested sending ex-slaves as missionaries to Africa. Hopkins, like the colonization advocates who would follow him, saw slavery as a blemish on America’s image of a country of equality and liberty, but was squeamish about the idea of racial mixing.

Thomas Jefferson, as early as 1773, was one of the first white advocates of colonization. During his presidency (1801-09), he considered Louisiana as a possible colony, while the abolitionist Thomas Branagan proposed first the American West and then (in 1807) Louisiana. Later, in 1811, Jeffereson responded positively to suggestion that a colony be "established on the coast of Africa". 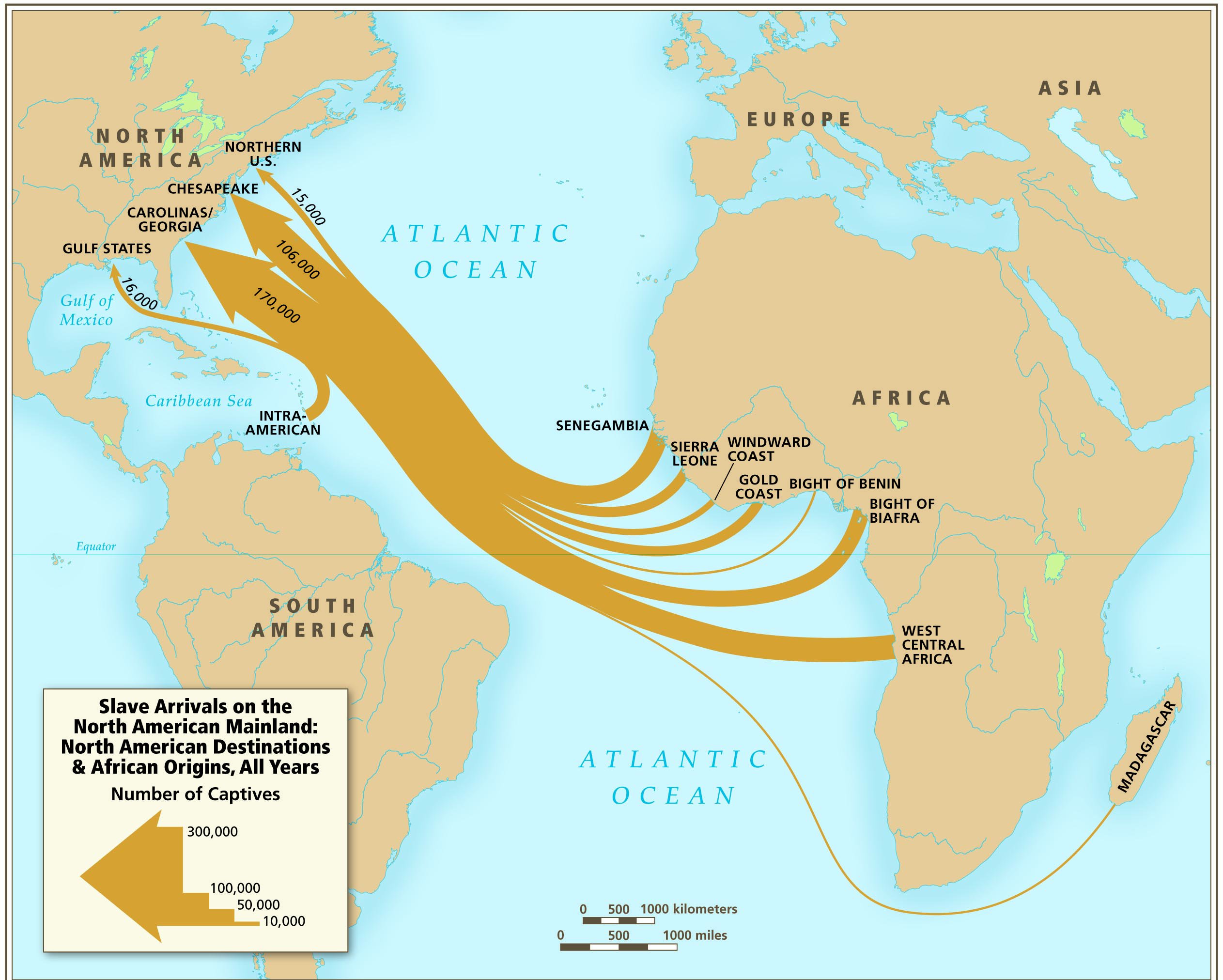 Points of embarkment of slaves shipped to North America. Liberia is in the area of Windward Coast. Note that, for much of the duration of the Atlantic slave trade, most of the slaves came from the interior. Image source

However, it wasn't until Paul Cuffee, a sea captain and businessman of mixed African / American Indian ancestry, that someone from America actually tried to put colonization into practice. Cuffee heard of the British resettlement in Sierra Leone (from 1787) of London Africans and later Black Loyalists (former slaves who fought on Britain's side during the American Revolution) and, despite the difficulties there, thought it was a viable option.

Cuffee arrived in Freetown in March 1811 to see the settlement for himself. Using his own funds and also money (and encouragement) from British abolitionists he met in London in July 1811, Cuffee planned to take African Americans to Freetown but was delayed by the War of 1812. Thus, it wasn't until early 1816 that he landed in Sierra Leone with the first colonists.

The American Colonization Society (ACS) was heavily influenced in its choice of region by Cuffee's efforts:

The Society's first agents, inspired by Cuffee's example, went to Sierra Leone in 1818 to look for a suitable site in the neighbourhood.

These agents had actually first gone to England

to consult with the authorities for Sierra Leone before going to West Africa. It was recommended that they establish their settlement on Sherbro Island, eighty miles south of Freetown.

when the first group of immigrants arrived, it turned out to be ill-adapted for settlement, and they had to abandon it.

Unable to find any other nearby site, dissuaded also by the Sierra Leone government from planting American settlers so close to a British colony, prospecting agents went down the coast to Grand Bassam.

Grand Bassam, in modern-day Cote d'Ivoire, proved unsuitable for a different reason; the locals agreed to a site for the settlers but would only rent the land, not sell it. The Society wanted sovereignty, though, and decided to look elsewhere.

Finally in December 1821 the Society's agent, Dr Eli Ayres, and a United States naval officer, Lieutenant R. F. Stockton, landed at Cape Mesurado, in the lee of which there was a better anchorage than could generally be found elsewhere on a coast which European sailors had shunned for three centuries. Here they began protracted negotiations with King Peter, the ruler of the indigenous De people.

King Peter (real name Zolu Duma), though, didn't want to grant sovereignty either until - apparently - a gun was (literally) put to his head by the Americans. A deal was struck and, in exchange for trade goods to the value of $300, land was ceded "in perpetuity". This land was Cape Mesurado. The first settlers, who had been waiting in Freetown, arrived in February 1822. Shortly after, in April, the settlement which was to become Monrovia, was established.

Despite the efforts of Cuffee and the ACS, though, only something like 10 - 13,000 African Americans ever made the journey. In truth, most African Americans felt there was no good reason why they shouldn't stay on the continent which had become their home.

Not the answer you're looking for? Browse other questions tagged united-states colonization africa slavery or ask your own question.

17
What other countries besides the US participated in keeping African slaves?
14
What was the impetus for some African nations to participate in the slave trade?
13
Is there any truth to the claim that freed slaves who moved to Liberia enslaved the local population?
4
Were African-American slaves forced to reproduce under the assumption of artificial selection?
8
Impact of the spread of disease from non-Europeans to virgin populations in the Old World
9
Was African slave trade ever directed towards Europe? If not, why?
8
Were the first African Americans in Jamestown slaves or indentured servants?
40
Why are many African-Americans in Mississippi concentrated in the northwestern area?
12
Which was the official position of the Catholic Church on the Atlantic Slave Trade?